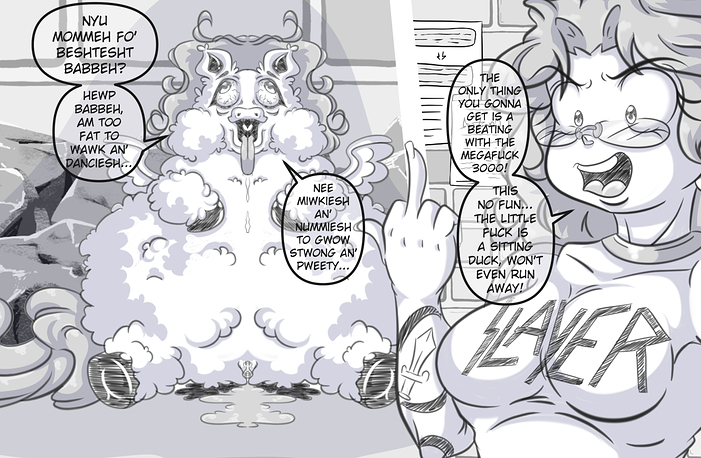 Illustration2611424×931 582 KB
I went the extra mile to make this shitrat extra punchable, because fluffies are for hurties and gore! XD Any input is appreciated! This comic should start as soon as I got the time to put into it.

Also of note, I’m open for commissioned work if anyone is interested.

Here’s what you do.

It wants fed, you feed it. The fattiest, greasiest foods you can find, stuff its face with lasagna like it’s fucking Garfield. Drip-feed it with lard if you have to.

Is it a girl> I think that’s a vag so I’ll say yes. Impregnate her, bulk her up as much as possible. Do what you want with the kids, you just need the extra weight on.

You want her to be gargantuan. And more importantly, you don’t want her using her legs at all, at least not yet.

After a while of this, you throw her head-first into a diet. Crash-course on veggies and water, but no exercise, you still don’t want her moving.

Eventually she’ll be thinner, but all of her loose skin will still be dragging her down. It’ll be dragging across the floor, getting scratches and cuts all over. But even better, after no using her legs for several months, her muscles and bones will be too weak to even lift her flabby body. Every step will be agonising as she tries to heft herself around, still too heavy but without the fatty flabs keeping her legs off the ground.

Then you leave her to fend for herself, knowing she’s more likely to break her legs and starve to death before she can even think about finding food.

This is downright EVIL! I love it, lol. But feeding a demanding shitrat and keeping the house clean with all the shit that will be produced can be expensive, and the little fuck would be having a great time eating at one’s expense, especially if it’s spaghetti. I mean, this is a slow burn of an execution, though. Like, it has all: the pain, the irony (too much of a good thing), the unavoidable death… Very well thought! =)

To me, a fluffy is a fluffy! XD

To me a Fluffy is a shitrat. C:

Pretty much! I’m on the team abuse all the way. They were written as unlikeable characters.

I get why people like them. But me personally think that they are annoying.

And their demanding attitude is the cherry on top

I do not understand why anyone would like them XD

They are cute and fluffy.

But I’m in the same boat with you.

I hope you mean the girl, not the equestrian abomination! XD

Fwuffys am for sodomy and pain and huge fat ones like that should also be pissed on daily and forced to breed and then watch as there offspring are liquified and given to her in an enema.

That’s a colorful description! I’ll take some notes, if you don’t mind.

How many fluffies DO run away successfully? Can’t make that much difference however immobile it already is since they can break their own legs by inhaling wrongly.

I think what she likes is that zone in between a real escape threat and completely immobile. Some sort of challenge, but ultimately failing every time. Maybe it’s her workout? XD