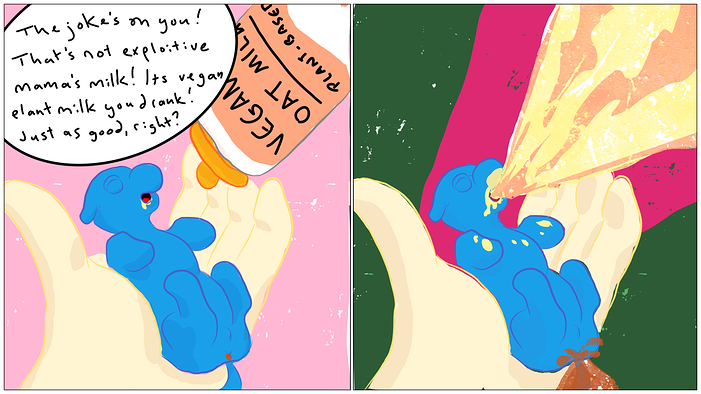 and i bet he was shocked

I would projectile vomit if I got oat-milk too. That shite is vile! Soy milk is the way to go.

I’ve not tried it yet myself. I’ll do almond milk only because of the low calories and carbs.

Sad thing is that this exactly what some vegans do to their pets.

It can work for some supposedly but not obligate carnivores. Also they might not consider animals can have food allergies to…

I’m no fan of almond milk since it tastes a bit too watery to me. Soy milk however is fine by me since my digestive system thinks it belongs to a fluffy if I get any type of animal produce such as dairy into it. Napoleon ain’t got shit (teehee) on my waste production skill were I to go to town on a meat lover’s pizza for example. The pain ain’t worth it though.

To be fair this is a fluffy, it probably puked/shit because the oat juice (that shit ain’t milk) was TOO nutritious for it to handle

Oh, the foal was never to blame. It was the “hah, I fooled you with the fake animal product replacement” person. And they got their just desserts

They’re interacting with a fluffy, you have to be ready to be covered in various bodily fluids and execrations when dealing with them

True. But a reasonable amount would be no fun. This is Kaiju breath weapon projectile vomiting and busted pipe pooping

I originally thought about the foal asking “What is this fecking shite?/” but decided against it. The oat milk wouldve been McGonnals brand. Or it saying “NO!”

And their kids, too.

Proof that even fluffies hate vegans.

Even shitrats hate the vegan thing…stop trying to convert anything to your dumb cult, vegans!!