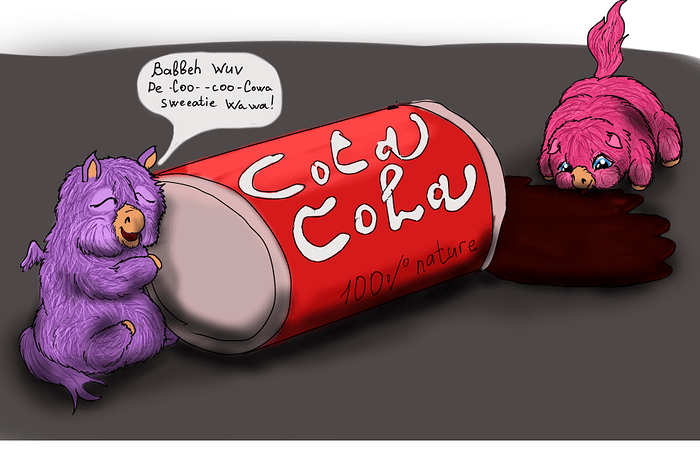 Where’s pepsi man ehen you need him, he can stomp on these stupid babies for liking sweetenedpiss water.
Although they’ll probably explode from the gassies insideof them.

At least Coke had the guts to get politically engaged.

Pepsi just had a shitty ad they ran away from at the moment there was controversy.

I think it’s the caffeine they’ve got to worry about.

Oh god, what if they drank some Monster? Their poor little hearts would explode.

At least Michael Jackson didn’t get his scalp burned while filming a commercial for Coca Cola.

Hooked from such a young age. I hope this don’t rot their teeth out

I’m of the opinion that if you give a fluffy an energy drink, it will kill them as effectively as poison.

A fluffy on a sugar rush would be fun to watch.

These Coke ads are getting weird.

ah yes ! the feral nuclear waste barril ! common at this stage of the year

I’m told folks have tried that with coqui frogs here.

Killed or not killed thats the question

More like Pepsi knew a petty dick measuring contest when they saw one and decided they didn’t have to prove anything.

I’d imagine what it does on their teeth? Especially for young foals, milk teeth for life, or worse, British teeth

That ad was years ago. They haven’t done anything since.

Truly the betas of the soda world.

coke is fucking racist. “be less white” is not my definition of an acceptable slogan. god damned bunch of disgusting sjw fucks. i haven’t drank coke once since they started spewing that shit. until then it was always a waaaaay better soda than nasty weird pepsi. the way that purple turd’s leg and lower abdomen look is just so perfectly torturable tho

drink water. the most based of drinks