Remember the time I made a comic of Dragon Ball Z but with fluffies?

Well in Dragon Ball Super we see Zamasu, who uses time shenanigans to steal Goku’s body and then team up with himself from another timeline. So today I had the thought: if Goku and by extension his body-snatcher are fluffies, then how do you handle the other timeline’s Zamasu? Would he also be a fluffy so the two match? Would he be a human? Some kind of animal?

… Then I realized it was both cuter and way funnier if he was totally unchanged. 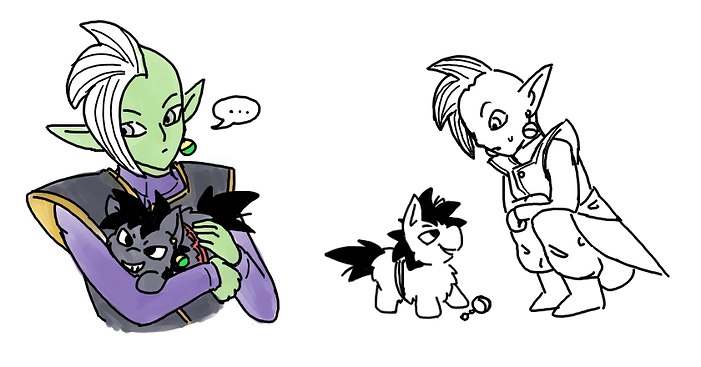 Imagine how strong that fluffy has to be for that bodyswap to be worth it.

Not a huge fan of Super, but this is adorable.

I’m mostly in it for the awesome battles and cute slice-of-life stuff, myself, so I’m pretty happy with it outside of certain moments like the Zamasu arc’s finale. Black and Zamasu are such cool characters I can’t help but love them though. (First DBZ villain whose fall into darkness we get to follow on-screen, too!)

I love good fights in Anime but feel like Super lost it’s teeth compared to Z.

Might be the lack of blood/crippling injuries! Apparently it’s on a more kid-friendly time slot nowadays, so they had to cut back on that stuff. It’s unfortunate really, but not much they can really do about it.

I gathered that with the softer animation style that it shares with Boruto, which also suffered that fate.
Personally I’m of the opinion that if something can’t be done properly, it shouldn’t be done. But I am glad that people enjoy it even if I don’t.

I feel Super was perfect for me as an older Dragonball fan. Like, my old comic shop would get the Japanese Shonen Jumps in sometimes and we’d get them even though we couldn’t read them. We’d sometimes have a friend go to Japan and being back VHS tapes of the current episodes during the late 80s and early 90s. Of the movies.

And now that I’m older I can see how padded it was. Super had what I liked with better pacing and writing. It brought back some of the humor pre-Z, at least for me.

Loved it. Love this. YMMV and all that.

And then they come across a Vegito fluffy.

And then they come across a Vegito fluffy.

Turning him into a piece of candy didn’t even slow him down, he could still wreck shit as a fluffy.