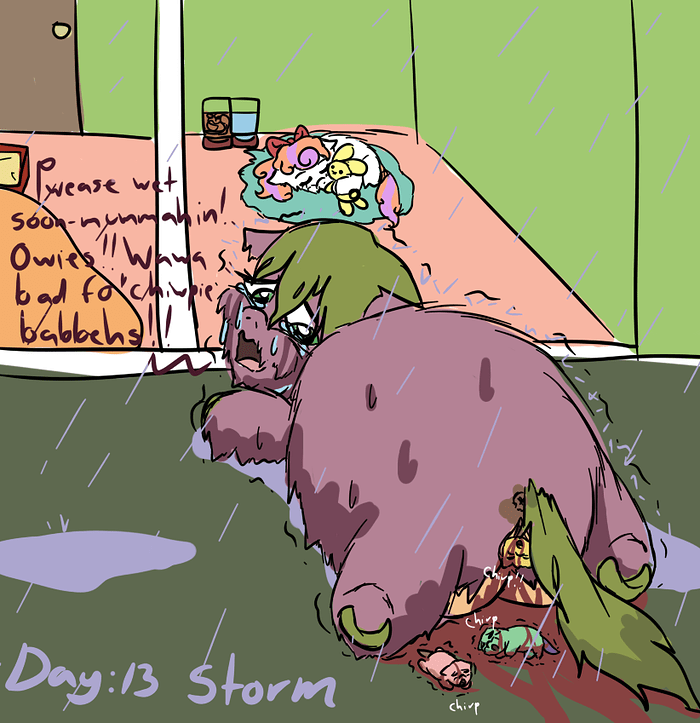 I bet the owner won’t be home for a while considering the amout of food and water there. Looks like babbehs will get hypotermia instead of a home. Gotta arrive earlier.

wonder what are their chances if the mama uses her fluff to shield them untill the owner arrive
great art as always!

May work, but they’re justborn foals, wet, cold and the mother as well, so maybe not many chances

Shitrats both inside and out. Either way that soon-mummah’s misery is top-tier.

Hey, that fluffy in the background looks quite familiar…

not really, curly 2 colors fluff on that one, I was testing a design for another fluffy to come on one of my stories

Is she a feral, or did the owner forget one of his Fluffys who would be highly pregnant outside?

She’s most likely to be a feral. It appears that the owner maybe gone for a short time, due to the screen door shades not being pulled, and secured, preventing anyone happening to B&E the house. If anything, this is a midmorning storm, and will last all day, with a human sitter stopping by in the mid-afternoon to make sure that the litter box is not full, and to entertain the mare for a few hours. This human will most likely be not permitted to handle ferals, so I’m afraid that Feral Mare is going to be waiting if they’re getting any help from the sitter via a friend.

This is a very good sadbox premise I don’t think I’ve seen before.

I imagine her trying to convince the indoor fluffy to take her babies. Then the indoor fluffy is picky about only wanting the prettiest one while also being totally indifferent to how serious this is for the feral.

The indoor fluffy eventually agrees to something, but then they realize they have no way to open the door to put the babies inside. Then the indoor fluffy gets bored and watches TV while the feral cries until it dies of hypothermia.

In my mind. She was a runaway who wanted babies and came home after her special friend died or left her for a prettier mare. Only to come back upon the birth if her babies to see she has been replaced.

I like that. Very bleak and to the point. And the fluffy will be even sadder because she realizes she did it to herself.

What’s better. The replacement sees her and starts to call her a dummy for running away and how now she’s a bad mommy and not pretty and smells bad too. Very childish insults but to a fluffy it may as well be calling them the worst things imaginable.

Sitter could call the owner and ask what to do, maybe.

Personally, I think indifference would be worse. Either the new fluffy totally ignores her, or sees her and goes and asks her owner to get rid of the gross fluffy outside.

Had a really dark idea of the replacement seeing her and asking to go outside and as the mother is too weak from the cold the new fluffy kills her babies infront of her. Either for fun or because she too is a soon mommy and wants to eat the babies for good milk.

Disturbing, looks like a Mexican soap opera from the 2000s

I doubt it. This October is oddly warm so hypothermia Is unlikely. Just a period of discomfort until the owner gets home