Fluffy abuse art: Too glue to be true by KingLuke 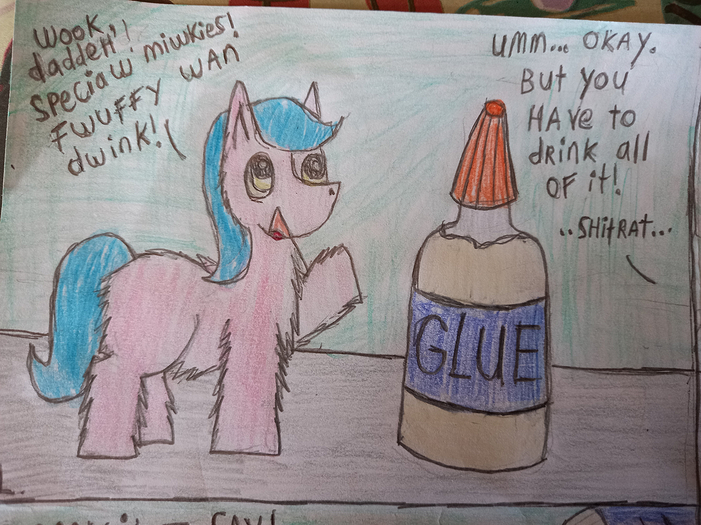 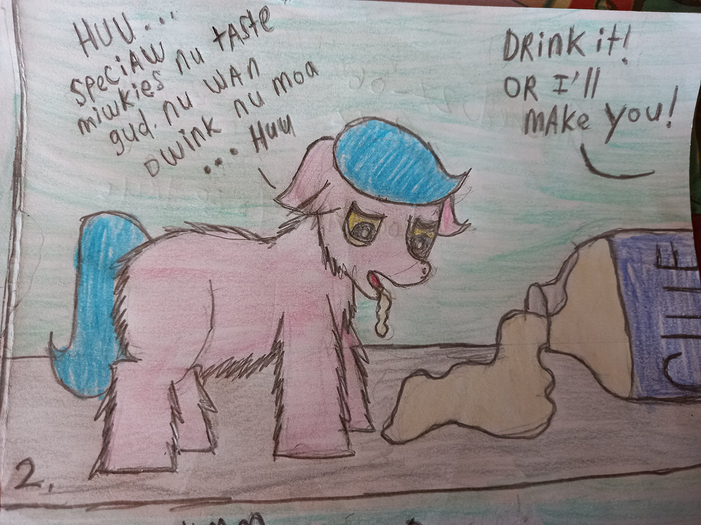 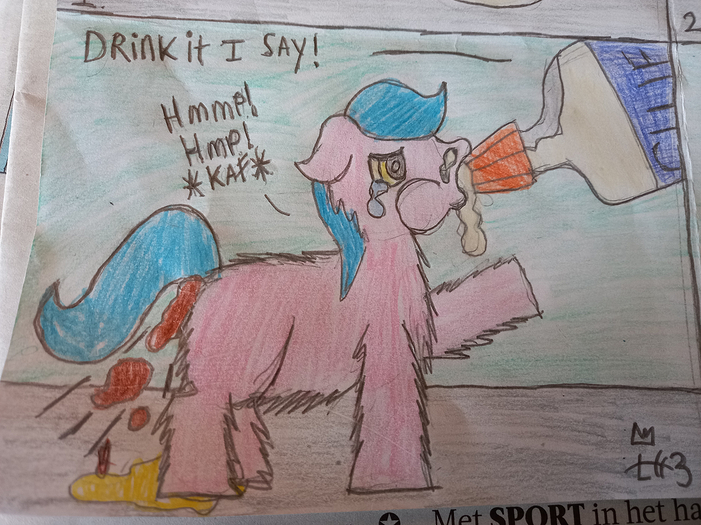 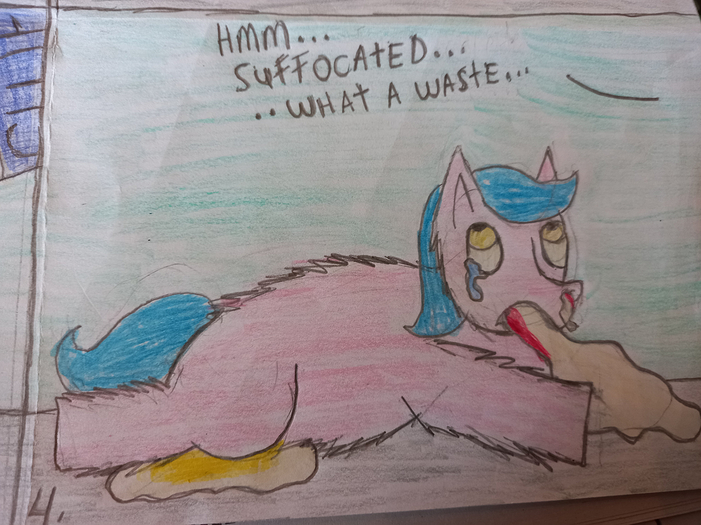 Hey guys! Sorry for the hiatus, life has been busy and full. Hope you like it!

Good question! I’m sure unwanted fluffies can be ‘recycled’ into glue.

I chuckled picturing a fluffy saying they liked the way the milk smelled and the owner realized they were sniffing glue.

depends on cannon, some write that fluffies are just vaguely horse-shaped chimeras, that don’t actually have horse DNA in them.

I’ve been looking it up, and they don’t really use horse hooves anymore. They use cow hooves instead, since cows are being slaughtered for their meat anyway and those hooves would go to waste otherwise. And selling horse meat is illegal in a lot of places, so that’s a factor too.

Also, artificial adhesives are cheaper and more efficient. One horse has four hooves. How many hooves do you need to make one pot of glue? What are you gonna do with the rest of the horse?

So this is a moot point. It doesn’t matter how much horse DNA fluffies have, they aren’t committing cannibalism by eating glue. Unless they have cow DNA, then it’s a possibility. Or fish DNA, there’s fish glue too. And Elmer’s glue hasn’t been made of any animal parts for a while.

Haha they totally would!

Makes sense. My headcanon is that they can be turned to glue.

That does make sense and I do think it’s better for our current society to find better ways to make glue. I just like the idea of fluffy glue.

If it’s got collagen in it, I’m pretty sure you can make glue out of it. A lot of glues are/were made out of the leftovers of slaughtering animals. The bits that would otherwise be useless. It’s pretty ingenious how we find ways to use the useless, isn’t it?

So if fluffies being butchered for their meat is a big thing in your headcanon, I’d say that fluffy glue could be feasible.

It’s not really a thing in mine. Fluffy abuse is gradually being banned across the Earth and other planets too, and fluffies aren’t really palatable to humans and a lot of other races. They were created to be sold as toys, so to me, it makes sense that Hasbio wasn’t focusing on how they taste.

The original canon was Fluffies have “marshmallow hooves”, which felt to me like taking the toe bean of a creature and grotesquely inflating it to grow around the entire foot skeleton similar to how aquatic mammals have a flipper containing segmented bone paws. 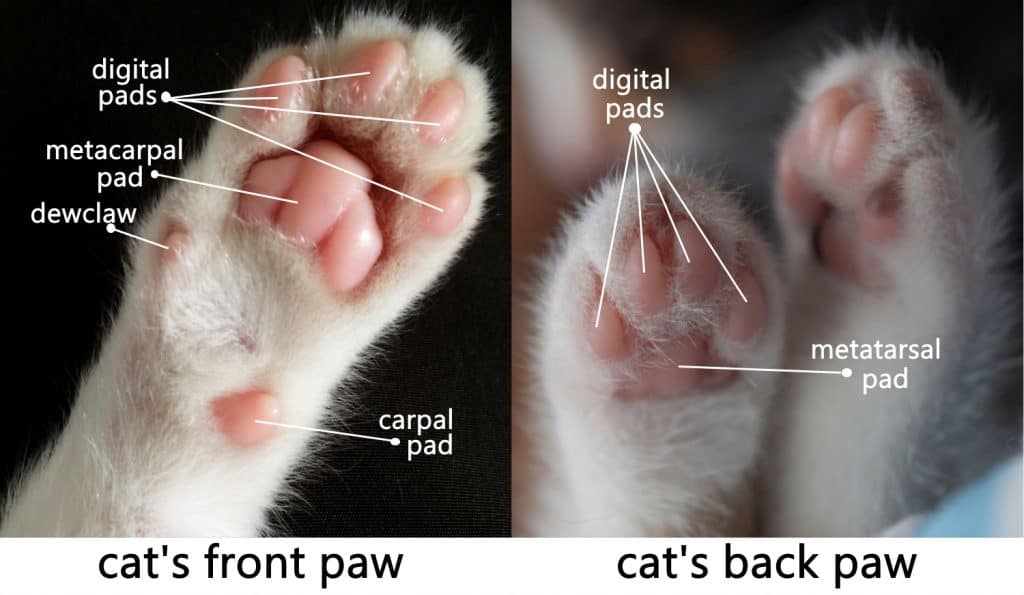 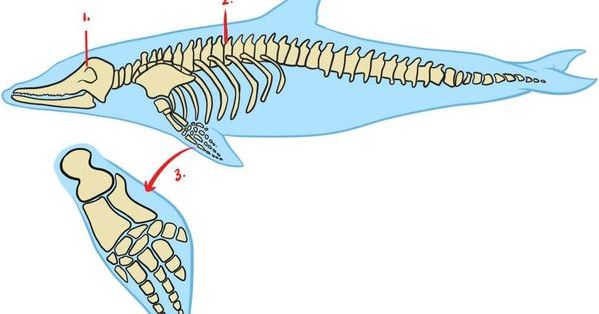 That said, even though the ability to harm each other makes no sense logically given the physics and biology, most writing gives all males the ability to turn all other non-cannibal Fluffies to paste and all females the ability to do it to Foals. Putting aside the handwaves to explain that, its particularly an issue if they have a giant toe bean to squish with. So I kinda write that some breeds have actual hooves, I can’t recall if I used it yet but gave some retractable claws albeit under the top of the toebean where if a difficult to actually use, and have a few other ideas I have not actually used such as a more leathery sole and a hood covered in a layer of velvet which looks like a big fluffy fetlock. All in my standby of there being many breeds via mutations, knockoffs, alterations, and generations of releases by Hasbio and other companies.

Now presumably a Fluffy with a real hoof could hurt a human which is a cardinal sin to original lore, but to me human suffering is just as fun to write and so I have no problem with it.

As for how it can be an efficient source of glue, just say some breeds have way more collagen. Or that its more expensive but a mix of Abuser counter-culture and urban myth means many folks will pay extra for it.