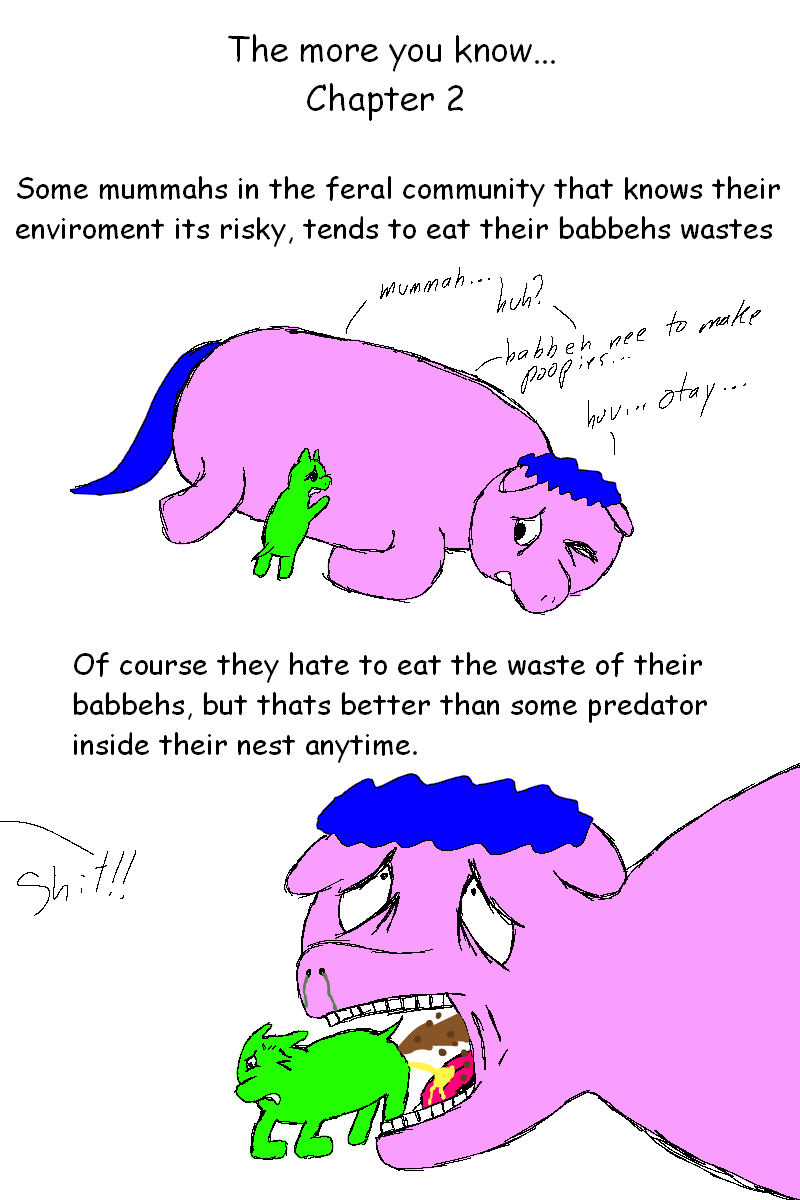 Ahhh…the best face ive ever draw hahahahaha
if you have some question feel free to leave it :3
Enjoy!!!

I know dogs like to eat their puppies shit for some reason, so this could apply here pretty much too xD

I think you are confusing “like” with “feel the need to”

nah I mean it
since their diet is purely of milk, probably it is full of protein for their mothers and etc

This is a good example of recycling. Remember kids, don’t crap the nest! Crap in your mom’s mouth!

Cats make the same because they cubs can be eating by rats. I remember when my cat was a litter and these start to using the litter box and I can hold the cat for she not goes to eat the shit, so hecking gross

I don’t know which facial expression is better; the baby taking a fat shit or the mom who’s gonna eat it.

Probably gets scared and bites it in half sometimes lol

Dogs love to eat poop from house cats. Allegedly cause are diaper about what they eat so there’s more flavoring in their food. And that flavoring makes its way to their poop.

Also, my friend’s dogs used to wait by their goat’s pen for the goats to poop. To eat it.

No wonder they’re considered filthy animals in some cultures!

I’ve always had the headcanon that mares need to eat their babies poop to keep the nest clean - but I never considered how much better it is when a baby drops it directly into her mouth!

The expressions are great too. Such woe and sorrow for both of them, wishing there was some better way to handle this.

Many animals are unable to shit or piss by themselves, and only can if the mother licks them. Or a human with a wet rag rubs them.

Of animals who are raised by their parents, I’d bet that the greater majority eat the feces of their parent to get gut bacteria and as easily digestible nutrition. Some, like sloths and koalas, subsist almost entirely on their mother’s shit for their youth, eating it directly from the ass with the same enthusiasm as nursing.

Most animals eat their own shit or that of others, just to get some quick nutrition. Especially apex predators.

One of the most human aspects of Fluffies is in any canon where they always die or slowly starve from a poop-only diet. The more animal they are, the more that that shit should be fine, literally.

In fact I’m almost tempted to write a breed where Bestest always die because they can’t reach adulthood on a milk-only diet unless the mother or their living conditions are especially filthy and her teats have shit smeared on them, only for it to starve later in life as it never considers eating its own shit in times of need. Maybe say it fulfills the Abuse desires for Hugbox breeders.

No, I had two dogs for over 13 years and they both definitely enjoyed eating their own shit for some reason

exactly :v
(but human ingest a small amount of feces bacterias from touching and putting their hands at their mouth, or just with unwashed food, it creates the intestine flores. It can be damadged by eating the same kind of food over and over again (variety is key for digestiv health) but it’s more toxic for humans to eat feces (like to drink their urines) it tends to ingest an amount of bacterias which is no good (mostly when you know that most of the species are dead because unable to survive at free air) PLUS some studies tend to show that kisses in human races is a way to spread good bacterias and viruses. So it may explain why we don’t have the urge to eat poop)

So Fluffy kisses, desire to smell and taste random things, and/or social grooming would be necessary for non-coprophiliac Fluffies to survive?

I need to write something on this. Thank you.

Sounds smart. The less risk of a larger predator of finding a nest is beneficial to the herd.