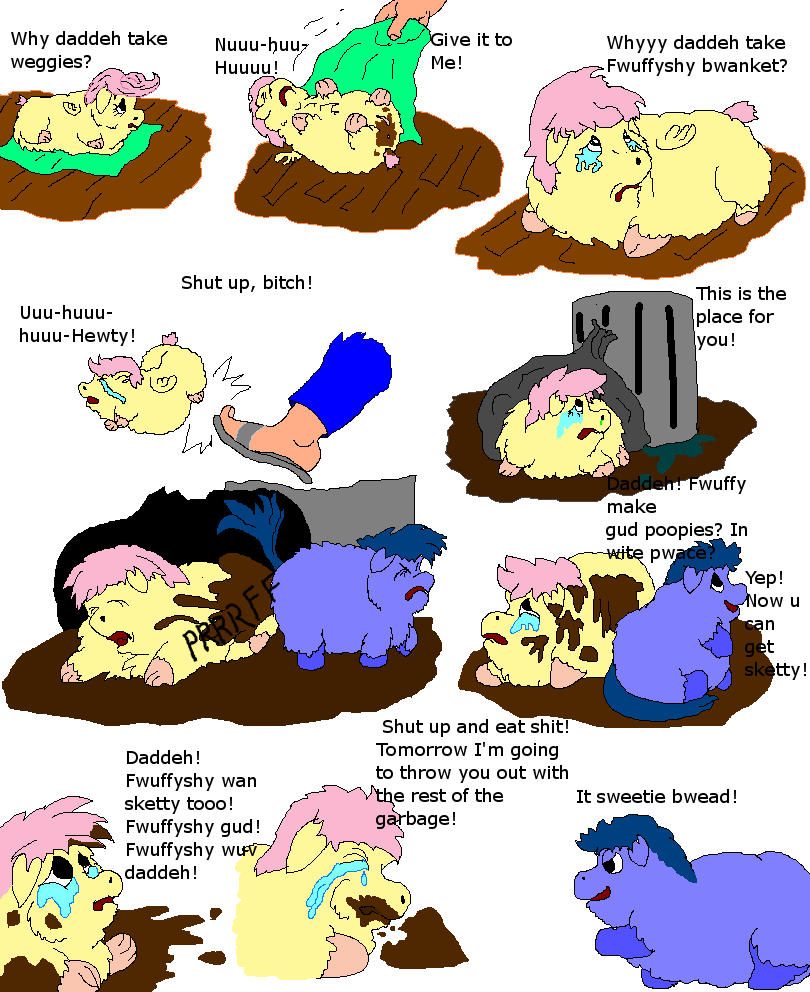 Sweet bread - a reference to a Russian arthouse film “Green elephant”, where one of the main characters offers his cellmate a plate full of his own shit, calling it “sweet bread”. Probably the most memed moment of the film

here’s a fan-made animation about it

I guess I learned something new today.

Any particular reason the fluffyshy is bein’ tossed? I mean, since the owner is treating the blue one fine (or maybe he just hates fluffies in general and is being temporarily nice to one simply to be cruel to the other, idk).

This makes me smile

Same question here. I think I saw somewhere someone saying that Fluffyshy’s were more preferred for abuse for some reason. But I don’t know why.

Hard to say really. I mean, Blue seems more obedient and well behaved. I haven’t seen any complaining and nagging from him in the comic, unlike Fluffyshy.

But it may just be that way because it’s Fluffyshy as apparently hating on Fluffyshy is a thing. Not my wheelhouse, though.

I see less complaining and more trying to figure out what’s going on. There’s a lot that probably happened before the first panel. “Why weggies gone?” would be a perfectly reasonable question

Maybe, but maybe not for the guy hearing it in the comic. Just theories.

Because Slutterbitch is trash even in fluffy form.

Yeah, could you elaborate on that…? I’ve seen that cartoon a time or three at most, never been into the fandom, etc.

I mean, I’ve seen enough times when someone being called “slut” really meant “she’ll have sex with anyone but me.” So I’m really lacking context here.

I hate MLP:FIM so I call its version of Fluttershy “Slutterbitch” because “slutter” rhymes with “flutter” and has “slut” in it.

I saw an art snarker (parody artist) use the term first and thought it was perfect so I’ve used it ever since.

I’m just using “slut” as a general insult with this.

And is disliking her specifically normal for fluffy fandom?

Seems so for part of it at least, probably mostly the FIM-hating members like me.

So that’s the origin of all hate for the character? Geewunning?

I’m not a genwunner. My favorite gen is gen 3, not gen 1. I hate FIM for multiple reasons, and the rabid bronies who shit on gen 3 are one of them.

Geewunner in the Transformers sense.

G1 encompasses the original Diaclones, Marvel comics that precede the cartoon, the G1 cartoon, the movie, G2, the Japanese cartoons that were never translated or released in English, and various continuations over the years including the crossovers with Alien, My Little Pony, Back To The Future, Ghostbusters, X-Men, GI Joe, MASK, Rom: Space Knight, and Star Trek.

The cutoff point is Beast Wars, the Unicron trilogy, the Prime universe, Bayverse, Dreamwave, and the two IDW comic universes. Also the Machinima and Betflix stuff. Each of those constitutes a different “generation” despite G2 being part of Geewun, and Beast Wars being canon to G1. Its a fan delineation, not a logic one.

So an MLP Geewunner I assume would be everything prior to the flash cartoon with Tara Strong?

I always thought that hateing something for it’s Fandom is unwise. Can you tell us the other reasons?