I Had So Many Ideas That My Brain Exploded (Federalchemical1728)

EIDT: OKAY I FJNISHED EDITING IT 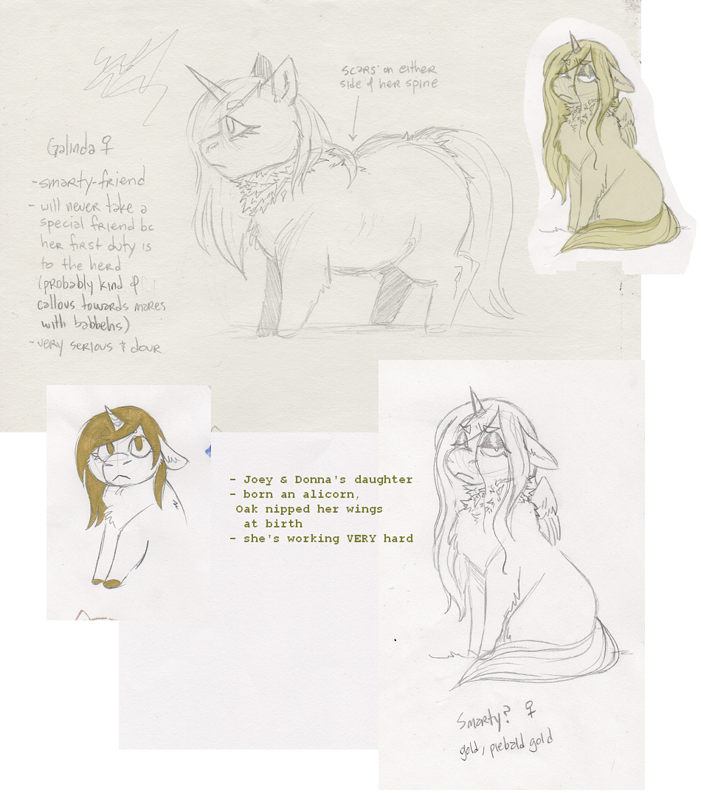 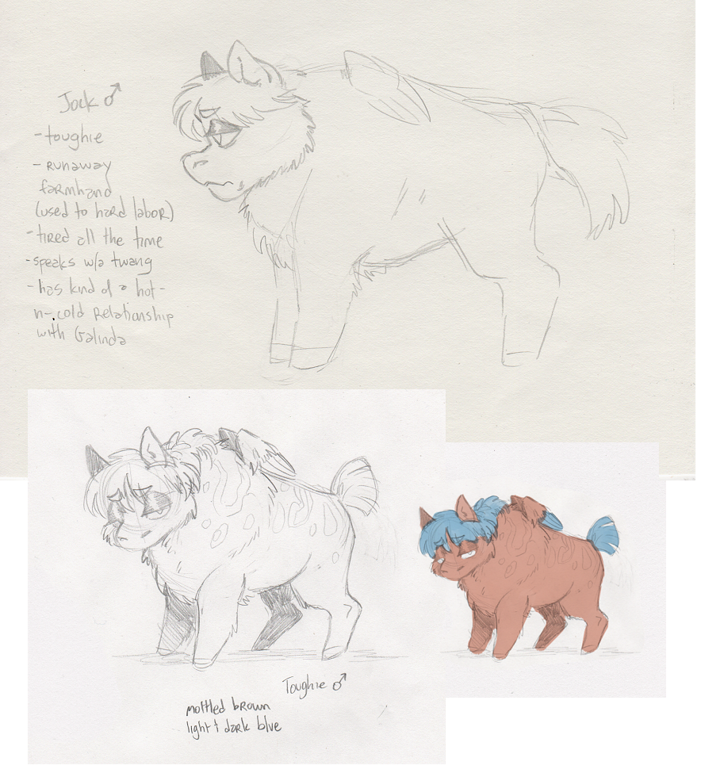 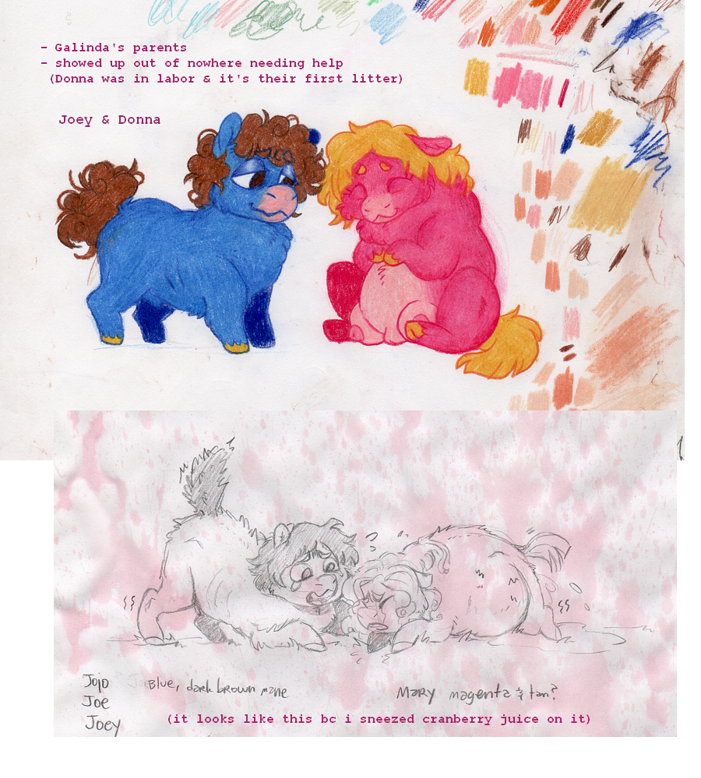 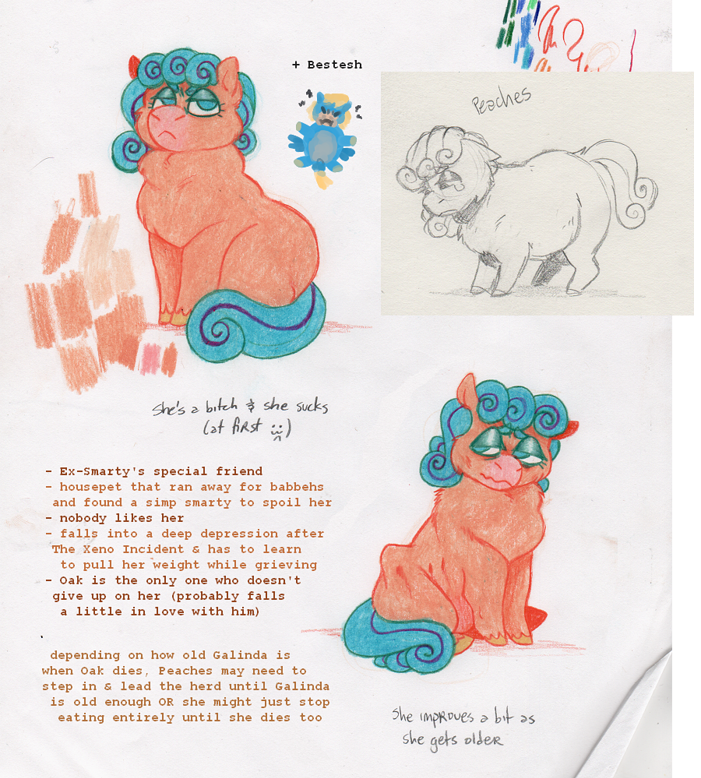 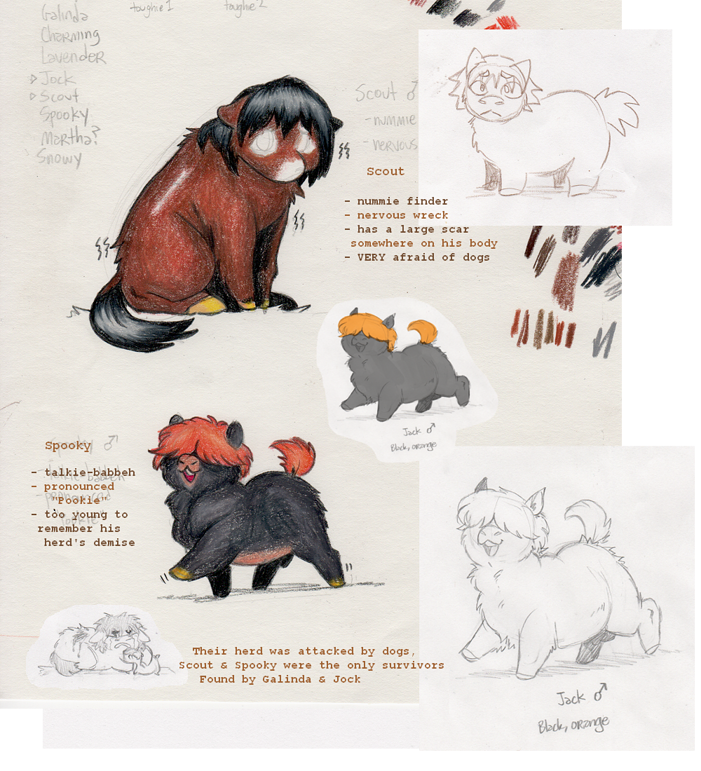 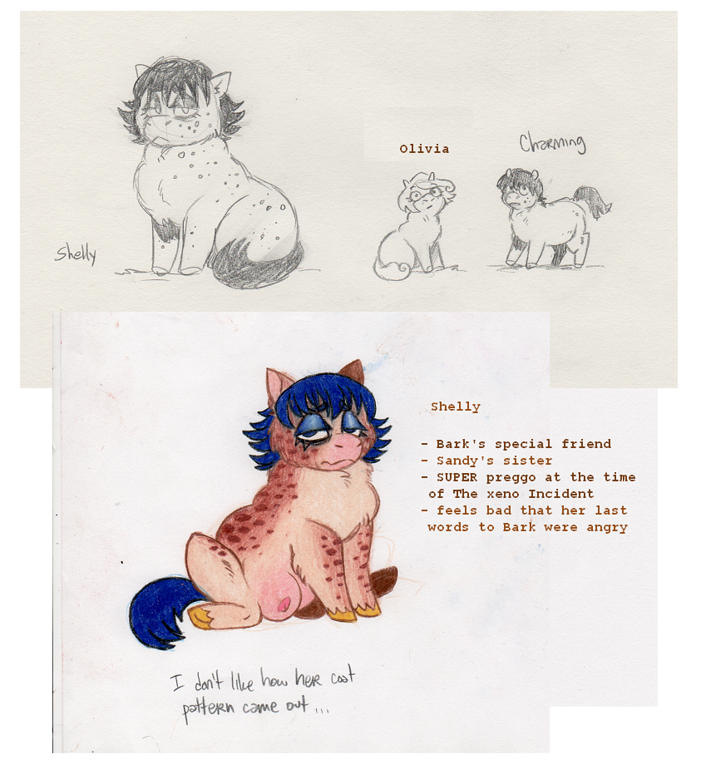 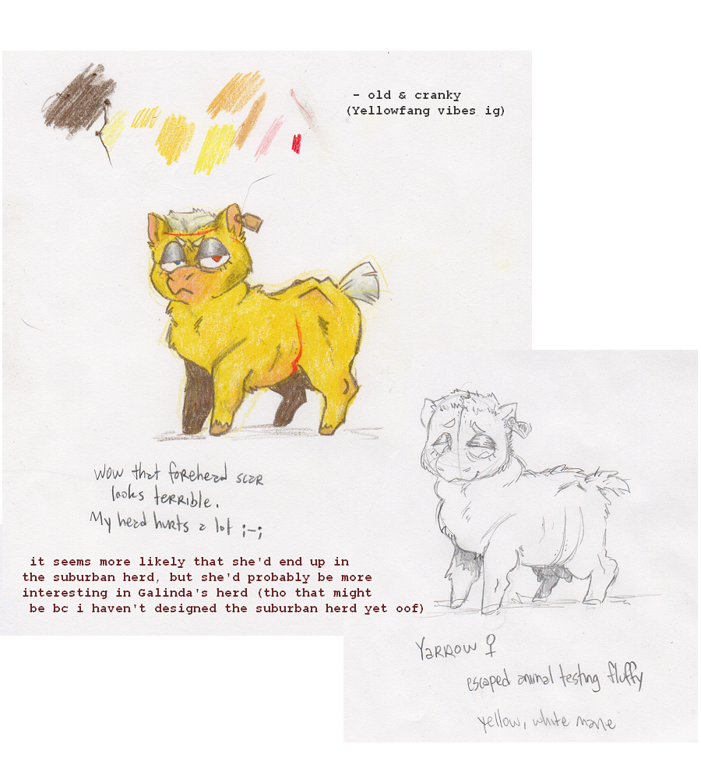 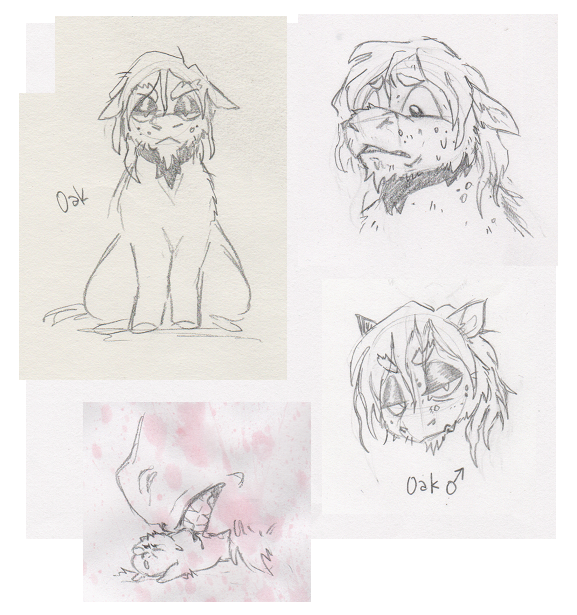 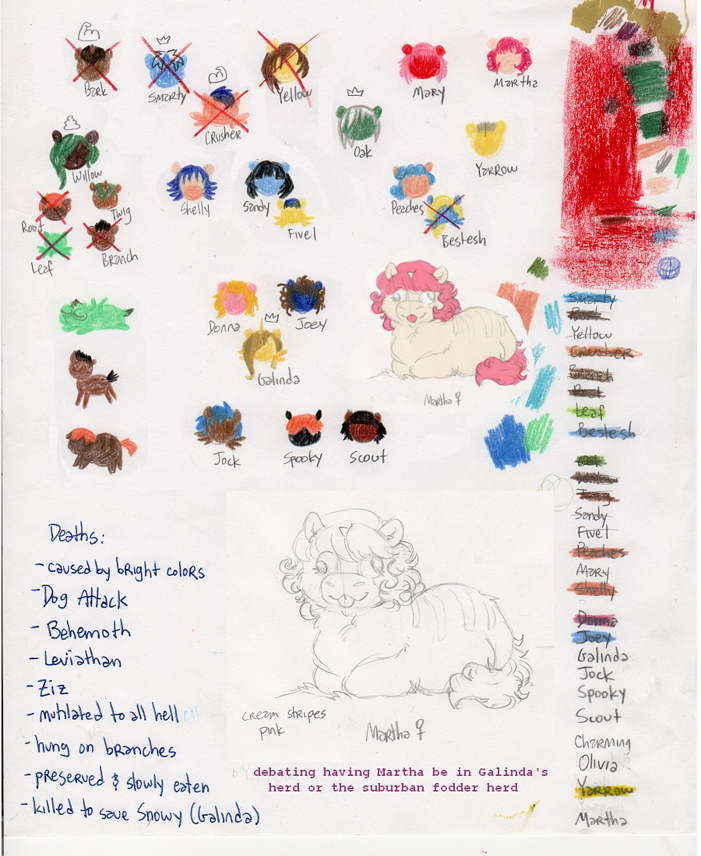 OKAY SO I GOT STUCK (CREATIVELY) AND WHAT ALWAYS SEEMS TO HELP UNSTICK ME (CREATIVELY) IS TALKING ABT IT so we in Info Dump Town now, Pardner
(also i ran out of antidepressants and that always seems to make everything waaaaaay worse

im trying to plan out what happens to the Fluffwich Herd after Xeno leaves, i wanna use them for my yandere cannibal alicorn horrorbox story that im probably gonna call “White as Snow” (Twig & Willow’s fates are a separate story with a probably equally bad pun name. i like Twig too much as a pov character to close the book on her just like that, but I Did Not Choose The Hyperfixation Life, The Hyperfixation Life Chose Me.)

SO my idea is for Oak’s herd to become the one that gets decimated by the yandere alicorn, with a new smarty & toughies & everything (there were only like. 3 herdmates left at the end of Fluffwich Horror so they need new recruits pronto)

Oak is kind of on his last legs so he needs to find & train a replacement smarty as soon as possible. he knows that alicorns are smarter than other fluffies, so when Joey & Donna show up needing help and pop one out Oak has to make a Quick Executive Decision

Oak will get his Hero’s Death, i just havent figured out exactly how yet

i also came up with a dumb biblical allegory where Galinda is like a reverse christ-child (having been born a “monster”), a savior born in a time of need, but instead of dying to save everyone she ends up dooming her whole herd to death (not even through any real fault of her own, that’s just how life goes for fluffies)

@GreaverBlade then helped me expand upon this fluffy-flavored perversion of holy texts with cool giant monsters that i didn’t even know were in the bible (they gave me an alligator gar as Leviathan, im thinking Xeno may have already been Behemoth, & Ziz could be either a big bird of prey OR a teeny tiny little northern shrike that specifically targets pretty colorful foals :3c)

even their “Little Miracles” sanctuary is kind of like The Promised Land. im taking this bible shit way far for someone who knows literally nothing about it skjxjxjjsjsjdjisbjfj

Full Transparency: creating characters for a story from scratch is fucking hard (and lonely if ur like me & your 1st instinct is to isolate yourself and hide everything)
so it does take a load off me to use other people’s characters, but it’s also way more fun bc they ARE other people’s characters (y’all come up with some WILD ideas my ass could Never) and having to get creative to bridge that gap is The Spice Of My Life. my gay little fingers are itching to brainstorm that “how-did-we-get-here” connection that will make their death hit that much harder hehehehehehhe

Not To Be Terminally Online About It, but one could take this as me offering to make Free Content of your oc (writing, drawings, just generally having your character occupy a portion of someone else’s mind. these are things that i like/want/appreciate myself, so im offering them to others as a way of connecting??? i am Socially Awkward help) so long as you don’t mind them dying along with everyone else by the 3rd act like Hamlet

I’m always so pleased to see more of your art.
Would prefer your brain unexploded though.

bro holy shit I love Spooky so much! I think your fluffy foals always look the cutest, but the amount of effort and work behind al lot your pics always makes them 10 times better!

Had to laugh at the “sneezed cranberry juice” it kinda works pretty well, probably the colour!! I love how much effort and thought you have put in, I have ideas that I want to write but I’m too lazy or easily distracted!! Also, please get your antidepressants!! Trust me, you have to wean off that shit, if you just don’t take them/run out, it’s hell!!

kek, from one introvert to another, if you ever want someone to chat with, I’ll happily do a bunch of weed with ya and chat

Yellowfang Vibes? Are you perhaps a fellow reader of Warriors?

damn that had to be a big sneeze

by our characters, would it count if i created floating-in-ether characters? cuz if your soul energy is connecting the dots then mine is creating characters, worlds and stories 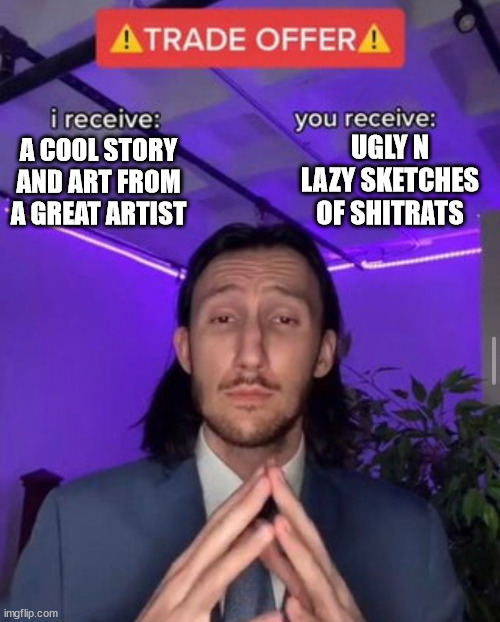