After receiving feedback on ensuring the project has a narrow scope, to make it more attainable. I have a full list of the planned game features ready.

My primary concern for the game is inclusion. I see little point in making a game from the ground up if the majority of folks are unable to ever play it. To this end, my current engine focus is the Unity Web GL engine. Since it allows games to be played from a webpage it should allow everyone that accesses this site and the sub-Reddit to access the game. I also want to include a majority of bio-toy breeds. I hope to add Fluffy Ponies, Micro Fluffies, Bowl Fluffies, Sea-Fluffies, Garden Fluffies, Cotton Puffs, Hunting Friends, and Puffy Griffins to the game. Furthermore, I want to cater to Hugbox, Abusebox, and Sadbox users and so game systems have been planned around them as well.

The planned genre of the game is “Survival Sandbox”. You will start off with some savings, but you will need to take care of your “Energy”, “Hunger”, and “Hygiene” while also balancing paying the bills/taxes and buying Fluffies and food for them. The sole way for you to make money is through selling Fluffies. Since they are bio-toys you can sell them right out of your house like a yard-sale. The main gameplay loop will be earning money for food (for them and yourself) by selling Fluffies while also budgeting to pay your bills (monthly) and taxes (yearly).

The Fluffy raising gameplay has multiple aspects to control. The very first aspect to manage is waste. Fluffies poop, quite frequently. Additionally, Fluffies that spend 60% of the day in poop will lose value and happiness. The value of the Fluffy affects how much you can reasonably charge for it. Happiness affects the likelihood a customer is to purchase the Fluffy. Think rationally, would you really prefer to purchase a toy that’s mostly covered in fecal matter and crying? So the player will have options to either let Fluffies poop wherever they please and be constantly cleaning waste up. They can place down litterboxes that need to be periodically cleaned, or they can try to make a primitive sewer system are lead the poop to a central area to clean it all at once. The next aspect is food. Since Fluffies are small and poop a lot, it’s safe to say they are not getting many nutrients, and given how energetic and playful they are, they need plenty of said nutrients. So you’ll have to carefully budget food for your Fluffies. Too little food and they’ll slowly shrivel up before eventually dying. You can feed Fluffies their own poop in a pinch since so many nutrients get left behind in it, but that quickly lowers their happiness. Also, when you feed multiple Fluffies, you will need to monitor them, as some Fluffies may steal food from other Fluffies for themselves. The final notice about food is that pregnant mares and mares that are producing milk consume more food than normal adult Fluffies. So don’t breed unless you have plenty of feed. Speaking of breeding, you can breed Fluffies to get better ones based on what Fluffies you breed. Though you will need to protect Alicorns and “poopie babbehs” from their mothers if you don’t want any infanticide. The other way to get more Fluffies is to patrol your property and look for Ferals, as well as check a nearby alley. You will be able to set traps to catch ferals to make the retrieval process easier. Though even without traps you can grab ferals and just run home with them. You will also get to see changes in Feral behavior as the times pass and seasons change.

Finally, there are the Fluffy interaction plans. My goal is to have both Hugbox and Abusebox options. So you can pick up Fluffies, and pet them, hug them, and play their games with them. Or, you could also slice and dice Fluffies, bash them with blunt and hard objects, or just straight up throw them. I may be a neutralboxer, that prefers justified abuse, but even so, the idea of picking up a Fluffy Foal and just throwing them straight into a brick wall as hard as I can is funny as hell to me. If you choose to raise and sell Puffy Griffins, you can also feed Fluffies to them! I aim to have as much interaction with the bio-toys as possible so that once you are done scraping by, you can just relax, raise and sell bio-toys, then play around with your favorites and keep them as pets.

Oh, and since you are still going to need to make money selling Fluffies, I plan on giving players a lot of options. One such feature is completely customizable prices. (NOTE: Just because you can charge customers several hundred dollars for a single brown foal, does not mean they’ll actually buy it.) You’ll also have options to set store policies. The examples I have atm are you can elect to ONLY sell Fluffy families to customers as a full bundle (so you don’t break up a family.) Or you could just set up your own Fluffy mill and sell them independently, family shamily! You can also elect to have an “all-sales-final” approach or allow returns or even refunds! You can make and sell Pillow-fluffs, huggie-fluffs, love-fluffies, litterpals, enfiepals, milk-bags at your discretion.

So that is my vision for “Into the Fluff-Verse” Any questions or feedback is always appreciated. I’m AngryHobo2 most places and Peasant_Garvey on the SubReddit. If you have anything to ask, just ask! After all, it wouldn’t be much of a community game without community feedback!

you shoud also be able to do some profitable interactions with fluffies, like alicorn friendly therapy (the prettier the mare, generally the less successful due to the likelyhood of being spoiled), various stages of smarties (ok smarties, rude smarties, bad smarties, and hellgremlins), different stages of difficulty, an alighnment reputation system, and a joke “weirdbox” mode.

possibly with all options unlocked/cheats enabled

The sole way for you to make money is through selling Fluffies.

I know this is a stretch – could it be possible to add a veterinarian mode or training mode so that you can get paid to train and heal fluffies? Possibly even interactions with the mills/fluffmarts to literpal/milkbag fluffies on comission?

Regardless, I would deeply love an option to sell fluffy shit as a fertilizer. Perhaps there could be equipment to store it (a tank) and a way to dry it to make dried fertilizer which is more valuable.

I think what you have planned so far is good, but still a lot of work.

Food quality. Will fluffies be happier if you give them sketti as opposed to kibble? what if you feed them shit? what if you use cheaper kibble? Would cheap kibble stunt growth? Could I force the fluffies to subsist only on “gwassy nummies”? Can i feed the fluffies just shit, piss, and trash?

Fluffy-Fluffy interactions. Will fluffies be jealous? Will they harbor resentment towards prettier/uglier colors? Will they attack or help each other? Will they form a herd on their own? Can spoiling a fluffy turn them Smarty?

Fluffy-mill. How will the building dynamics work? I would want to be able to build floor to ceiling pens with automated feeding, watering, and waste removal (in the endgame). Would you be able/required to hire assistants? Could I make money selling fluffy milk? What about used-limbs? What about accepting biowaste for a fee? (Which I feed to the naughty fluffies that I’ve since pillowed and placed in the pens through a force-feeding tube

I apologize for the wordiness. All in all, I look forward to your game. DM me if you need a bug tester or any other help :-).

I am making no promises here, but perhaps in place of a “Vet” mode instead there is just a chance to get a request to “Raise Fluffy Value” and doing things like potty training, and good behavior training boost the value?

While using Fluffy fecal matter would make getting rid of it easier, not to mention profitable, I just want to be careful and make it realistic. So supposedly, composting manure makes it safe for plants. So while fresh Fluffy scat would very likely damage plants, once composted it might be safe for them? It’s a bit early to get this worked up over shit though.

Food-wise, I have several plans for different food varieties. It goes as follows:

Fluffy interactions? Fluffies will all fall under a spectrum much like people, some are really nice, others are total assholes. It’s random and varied though the majority of Fluffies will fear Alicorns. Furthermore, the majority of Fluffies will also be less than kind to “Poopeh Babbehs” ferals and store-bought Fluffies alike. (Ferals because they feel they have a temporary home in spite of the “Poopie babbeh” and Store-bought Fluffies know that colors mean everything and dislike bad colors.) Inside the player’s home, Fluffies will not form a herd and instead refer to the player as a caretaker and herd leader. Feral Fluffies will have small herds and sometimes Smarties may launch yard invasions. If you spoil a Fluffy excessively it should become a smarty.

Fluffy mill? I’m still working on what players can craft to house Fluffies, I need more inspiration, but above all progress first. So in the mean time, enjoy my “epic artwork” 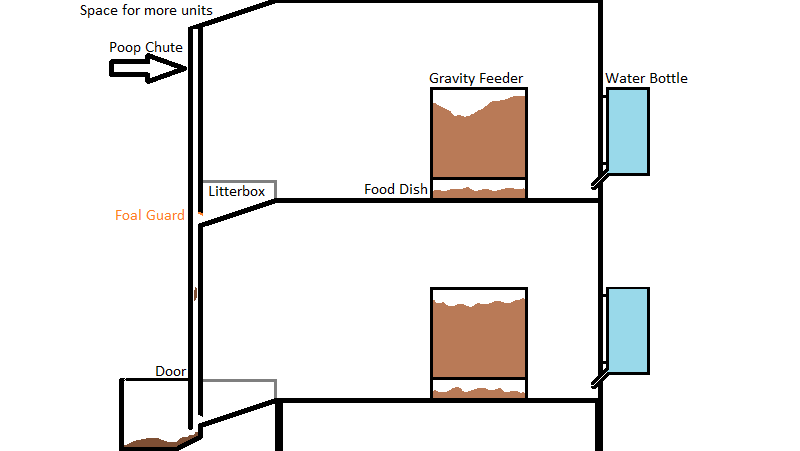 Sorry I didnt see this until now. The stacked pens idea is a great one for industrial breeding. I agree an interactive Vet mode would be it’s own game almost. Behavioural training should be doable though (I would think?) Anyhow keep us updated!

I wonder how things are going.