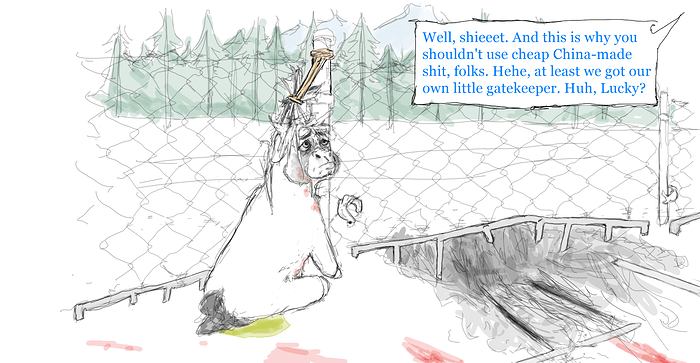 it wasn’t the fluffies that dug the hole.

I have to admit that I don’t know what I’m looking at exactly. I only know that the fluffy is in for some shit and should probably be praying for death right now.

oh, no, that’s just her tail. i originally colored her mane and tail that grey tone, but decided it made it too muddy. cleaned up the mane but forgot the tail it was at the end of an allnighter when i posted this.

Whats the story here, is there some vermint trying to dig its way into the fence with the fluffy guarding it?

the fluffy’s there to warn away any other prospecting herds from passing the fence while the farmer, his farmhands, and his dog finish off the herd from my previous post. ú w ù

I see now its clear, thanks

yup. they’ve actually come in after a herd of feral hogs came through and rooted up the entire field and turned it into churned up mud. they’re just unfortunate to have been at the right place at the wrong time, and the farmer’s mostly venting his frustration out on these unhappy fluffies.

i’m alright with revealing as much i’ve been thinking about making a proper series describing the misadventures of this unfortunate fluffy.

Feral hogs? Damn those feral fluffies wont even stand a chance even with its dumb smarty if they ever met with it.