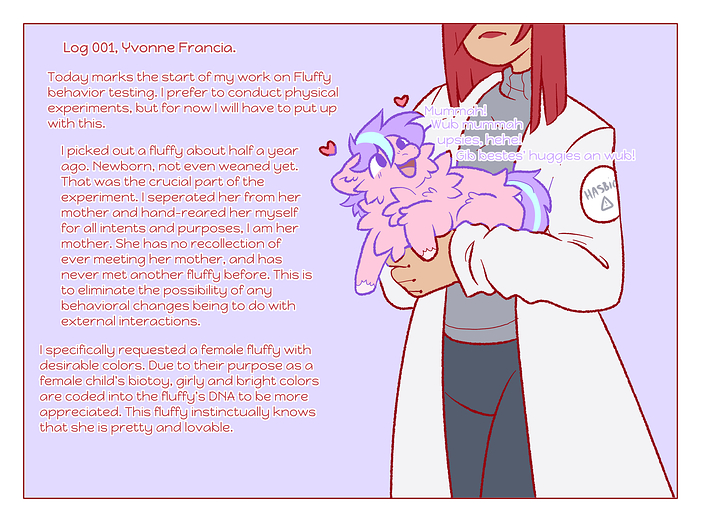 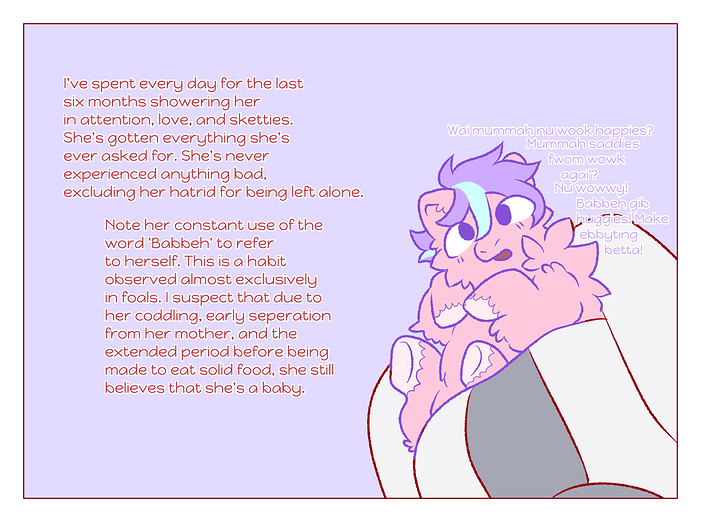 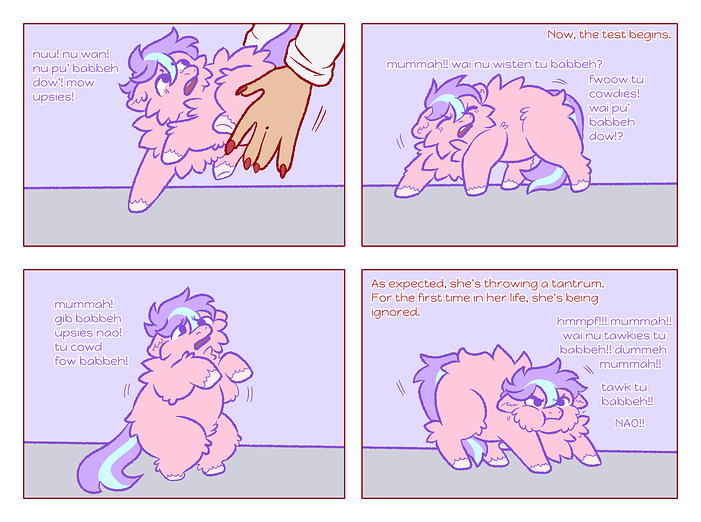 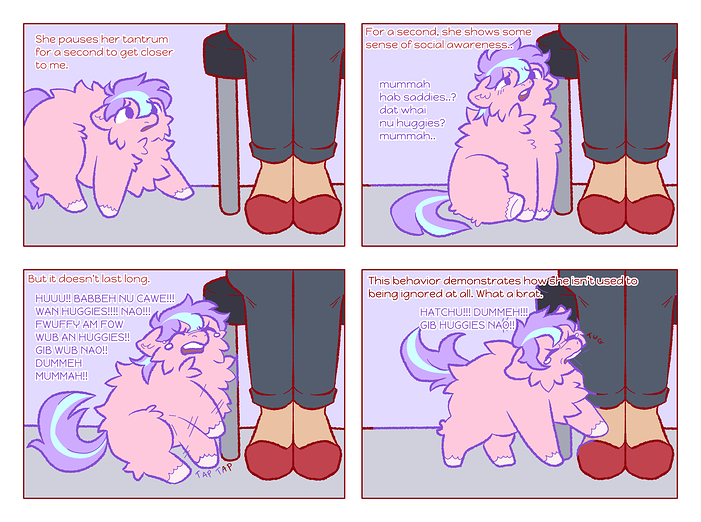 Log 000, Yvonne Francia. This test is to push the limits of how spoiling a fluffy can effect it in later life. Hasbio seems to be unaware of the irritating nature of the products, or maybe they’re just ignorant. I will suggest this test tomorrow, and if all goes well I will be able to conduct it within a few months once the fluffy I picked out has grown up. I’ve been raising it myself, using the excuse of getting attatched. Hasbio needs to learn the errors in their programming, and I plan to show them that, and how valuable of an employee I am. I will continue writing when the experiment begins.

Ill finish this… eventually!
this comic mainly serves as an intro to Yvonne and her experiments. Technically this takes place in the past in comparison to her main story. She ends up fired from Hasbio due to the increasing malice of her tests and the way she treats fluffies. But hey, Hasbio cant take away her doctorate, nor can they ban her from interracting with fluffies.

Can’t wait to see the rest.

~Fluffy is desiccated husk wheezing for attention before it dies~

Wanted to link a comic where this happened in like 5 or so stages of ignoring them and their physical/mental well being rapidly erroding but couldnt find it.

Thought this was the fate of the mare from ‘expiry bin’ till I remembered it was the wrong mane/tail. Then I remembered the timeline didn’t add up and felt dumb. xD

Dorothy happens to be one of my favorite comics and I can see the correlation.

It’s one of my favourites too! This comic is heavily inspired by that one, as in a way i really wanted it to be more drawn out. Hope my comic can live up to how great Dorothy is.

Your art is fantastic.
And I’m looking forward to seeing more.

While I like Spoosh, I always felt Dorothy flip flopped a bit too fast.
Because if that’s the case with fluffies you can’t leave them alone for any amount of time and most pet fluffies will end up dead

I personally didn’t take it as moment to moment between panels.
It makes more sense if it’s anywhere between 10 minutes to an hour each panel.
Explains some of the neurotic behaviors of fluffies and why they don’t like being alone.
And remember, Dorothy didn’t die. She was thrown away. Plus she was a foal.

The topic of neglect has been explored before, but you’ve made the fluffy adorable beyond measure. I’m eager to see this continue.

This experiment will test the hypothesis that if you incorrectly raise and train an animal under very specific unhelpful conditions, it will not be well-adjusted in other situations.

No, that’s not a thing that needs proving, or can be measured in any reasonable fashion by this experiment. But a fluffy is about to lose its shit, so I’m in!

I second this. Or third it. Or take a number and wait patiently for it.

A pain in the ass to deal with irl and worse with fluffies as they typically lack impulse control and self awareness or simply don’t want to better themselves.

honestly i kinda love Yvonne, she’s like the polar opposite of my own redheaded scientist lady. Yvonne is cold and calculating where Lucia is hyperactive and frazzled. Yes, im going to draw them hanging out now you’ve sealed your fate by having a cool oc

i always get frustrated with owners that punish their fluffies for simply reacting to a new upsetting situation in a way the owner doesn’t like (yvonne DOES get my respect for not blowing up at her bratty fluffy, but she did also specifically raise this fluffy to BE a brat to prove a point djjsjsjhdjdjs fluffies ARE disposable, but ppl who cant lay in the bed they’ve made are the WORST

mentally, fluffies are uncomfortably similar to human children. ideally, they would need to be explicitly taught how to deal with certain situations (the price of having a talking pet ig) but unlike humans, i doubt fluffies get smarter with age.

plus the effectiveness of the training/teaching completely depends on your headcanon & the fluffy’s capacity to remember and apply the lessons.

((hi im trying to re-parent myself properly this time so this is what ive got on the brain, apparently lol))

In general, I don’t think Fluffies get much smarter with age, maybe wiser, but not smarter. The nature vs nurture debate is still a hotly contested issue today, so I’m sure it would be too in a world where Fluffies were real.