Sanctum: A Stranger At Your Shelter [ CoronaryHeatingProcedure ]

A Stranger At Your Shelter

You are Stella, a worker at a local fluffy shelter.

You found yourself infatuated with fluffies since your teenhood, so much in fact that you rushed to get any fluffy related job you could as soon as you were old enough to apply.

That was before you knew how depressing these kinds of jobs could get.

You remember stepping into the shelter excitedly on your first day, expecting happy fluffies in little rooms with lots of toys and other accommodations, waiting to be picked up by their new loving family but instead you found rows and rows of miniscule cages lining the walls with barely enough space for the fluffies to move, let alone play.

It was soul crushing, almost making you cry as they called out to you in desperation, wanting you to be their new “mummah”.

You didn´t know if you could handle it at first but slowly you learned to zone out during your working hours, your focus on your tasks and costumers. You don´t know when but you also picked up smoking along the way.

This job really drained you and today was an especially slow day.

Little to no people paid the shelter a visit and the few that did either picked brightly colored young fluffies or bad colored adults. The later would probably end up being tortured to death.

Ugh, you didn´t want to think about that.

You stopped for a smoke break, hoping to ease your nerves. There wasn´t anyone to tell you off anyway, you were alone today.

You looked up longingly towards the starry night sky, wishing you had made a more informed choice back then. Well, it wouldn´t change anything now.

You tsked, turning back towards the shelters backdoor bitterly, stepping in only to be greeted by the sad huu-huu´s of the fluffies once more. Thank god your shift would be over soo-

The ding of the entrance bell brought you back to your senses.

A customer this late? Who in their right mind would visit a fluffy shelter at this hour? Oh no…

You put two and two together right that second, and you didn´t like the conclusion you came to. There was, with utmost certainty, an abuser in the building with you.

Slowly you made your way towards the storefront, secretly hoping they would leave but that was wishful thinking. As you rounded the corner you became aware of just how vulnerable you felt in this situation.

There, around the corner, stood a person with long disheveled hair put hastily and ineffectively in some sort of bun. Their body shrouded in darkness, like a shadow that gained sentience. Their expression, or what you could discern as one, was one of mistrust or perhaps even distress. It was really hard to tell.

Was this some kind of joke pulled by one of your co-workers? Maybe a hallucination caused by stress?

Great job dumbass, you scolded yourself internally as their eye focused on you, making you even more uncomfortable.

“A fluffy” they requested simply, avoiding eye contact looking around the room disoriented “I need a fluffy”

“o-okay…” you trailed off, adrenaline shooting trough you as all kinds of alarm bells go off in your brain.

“Follow me please.” You force yourself to say despite the immense fear, leading them to the cages.

You spend the next twenty minutes desperately showing off the best and worst of the stock, hoping they would just choose something and leave. The fluffies, usually begging to be picked, looked as scared as you felt. Even worse, nothing seemed to interest this strange and unnerving person.

You started to panic.

Then something caught their eye and they walked over to a cage, putting both hands on the bars.

Your heart froze at the realization of whom this cage belonged to. That sick bastard had been looking for a chirpy this entire time. You felt sick.

“Why is this one here?” they asked, no emotion detectable in their voice, their eyes fixated on the newborn.

You looked at the small defenseless creature, laying on a heated pillow next to a bottle of milk. That poor thing suffered enough as is.

“He was rejected by his parents. They didn´t like his color.” You managed to say, remembering the bitch of a mare that almost managed to stomp all her children to death because they were “poopie-babbehs” despite the fact that she herself had less then desirable colors and the stallion that didn´t give a crap about what was happening.

They didn´t respond for a solid minute, watching the dull pinkish purple earthy with the beginnings of an off-white mane and tail sleep peacefully until it yawned and stretched, starting to chirp for love and attention.

“May I…?” they murmured, looking back at you for confirmation to which you nod, fearing what they might do if you don´t comply.

You stood there, too scared to move as they opened the cage and took the chirpy out, the little creature suckling at the persons finger making little cooing sounds, to naive to know what was about to happen.

The anticipation made hard to watch but instead of the expected crushing of the foal they held it gently, a look of sympathy on their face and content washing over their features.

“This one” they stated, absorbed in the moment, planting a soft kiss on the foal’s head and pulling it towards their chest in an embrace. “I´ll take him home”

You were utterly dumbfounded by this revelation. This entire time you were so focused on the abuser narrative that the possibility of anything else slipped your mind entirely. Now you felt really bad for thinking such horrid things.

The adoption process went smoothly, with the costumer even shedding a few tears of relief and giving you a hefty sum of money for your time.

Much happier than you had been for weeks, you closed the shelter´s doors, certain that this little guy had a bright future ahead. It reminded you why you wanted this job so badly in the first place. You wanted to care for these little critters.

Maybe, a fresh start someplace else was the right thing for you. 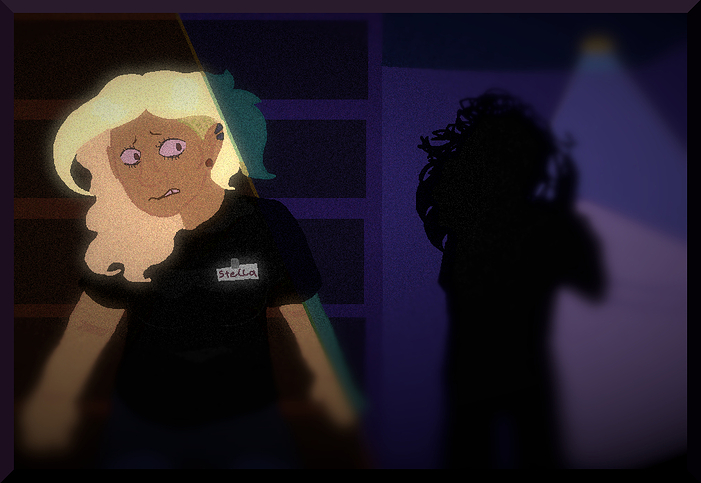 Sometimes scary-looking people are just trying to live and love like all of us.

Neat setup. I particularly liked that feeling of unease/fear in our protagonist of the moment. Really nice touch. Been there in some past jobs where some spooky SOB shows up and you’re waiting for a knife to be pulled or something.

Oh my goodness, that’s your and Turnip’s first encounter! :,D I love this