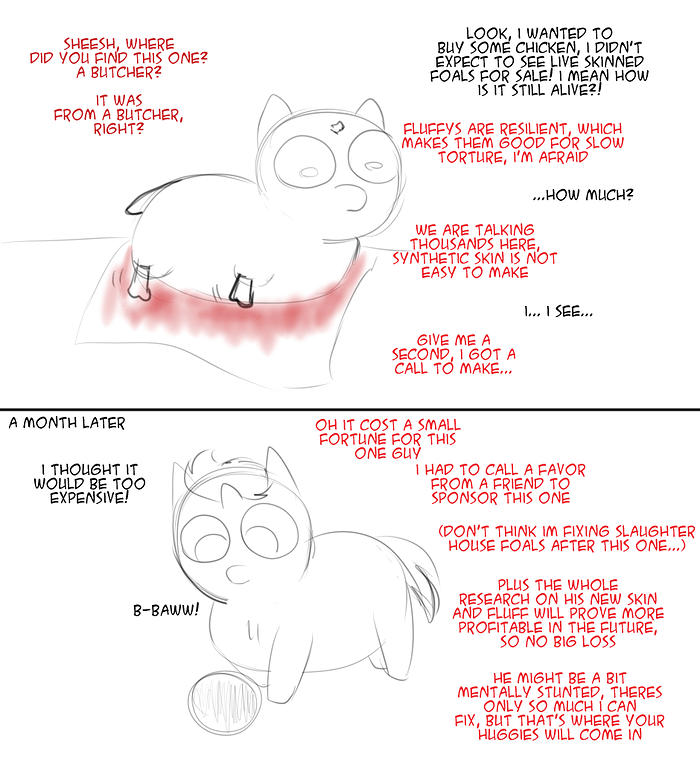 Quick one shot, more to show a 9/10 case for Fixer looks like. The kinda treatment that would be so expensive he needs to call a buncha favors just to get a shot at it

Another route this could have gone is donated skin/fluff grafts. Since he was just a foal just a few adults could have donated without much loss to themselves. He would have ended up a bit patchworked but would have been a fitting name of Patches.

As is, maybe Butch? Roaster? Either way, I’m happy for the little guy. Thanks for another banger.

I wonder who fixer called, It could be anyone.

Boopco: Yes, it could be anyone. definitely, no one with an ulterior motive… -Sips tea-

i didnt think of that lol, dang it missed opportunity DX

Why? You must be new to the fluffy community.

I think it was Ringmaster who skinned all of a mare’s foals and used the skins to make a blanket, which he stapled to the mare.

So, yeah. Welcome to the circus!

Floofco specializes in pelts, unfortunately those pelts belonged to once living hategoats

Does the guy/company have a name yet?

The company name is boopco

Thats gonna be a slowwww therapy for that poor foal.

Meanwhile, in an alternate universe…

The CEO of floofco enjoys boopco products, just not in a hugbox way

XD i could see that being the sponsor as well

Saves you the effort of tediously breading your own foals. Just give them an egg wash and they can roll around in the bowl with the salt and cayenne and breadcrumbs themselves.