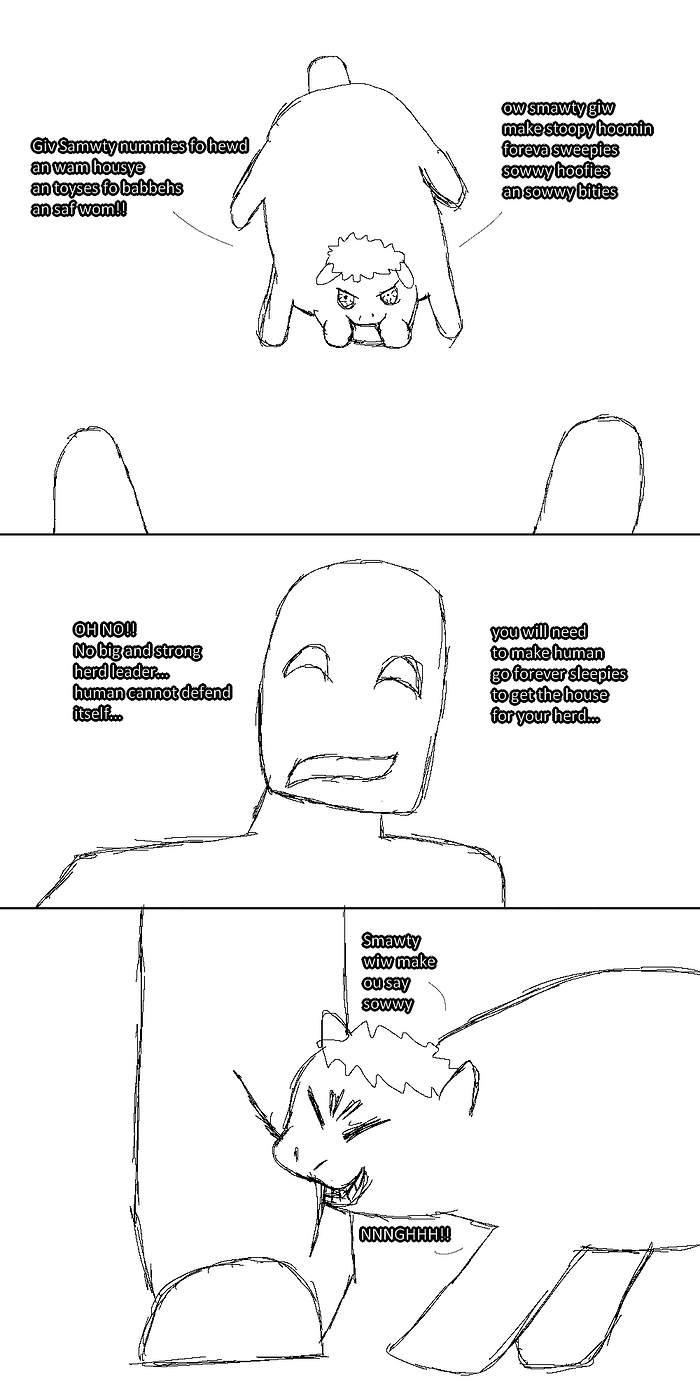 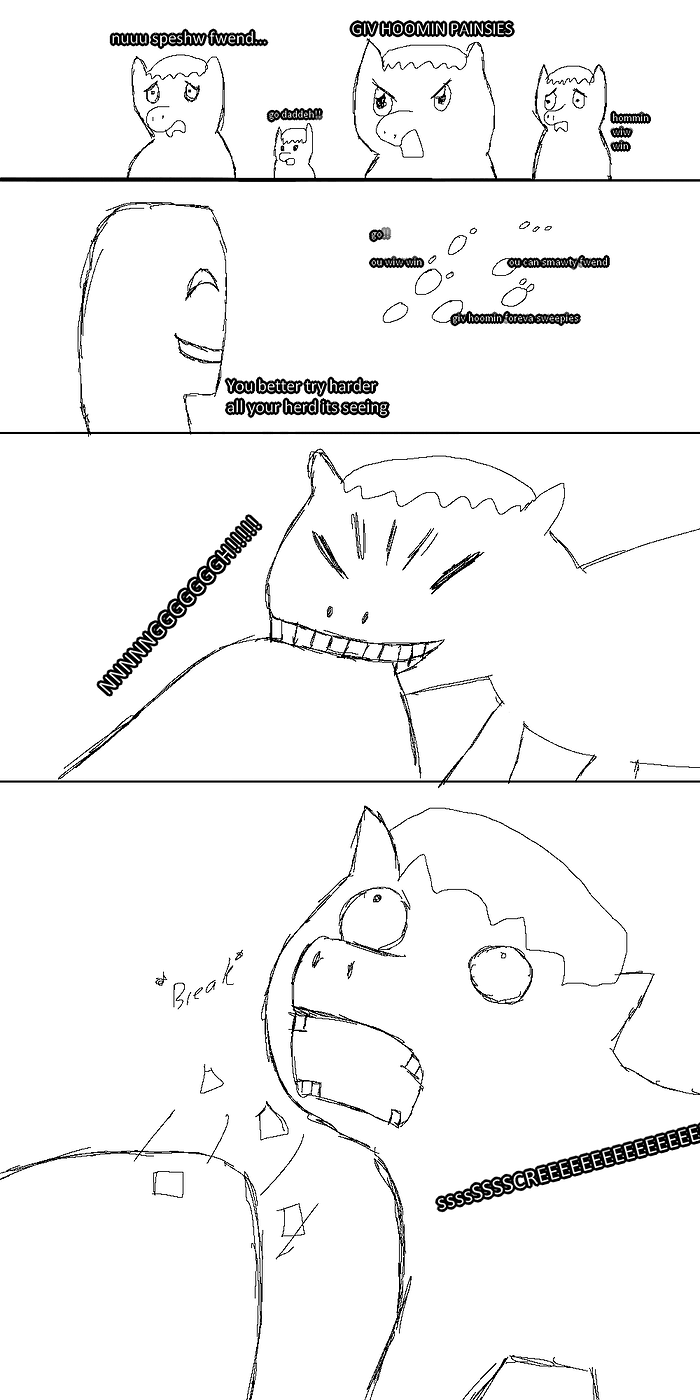 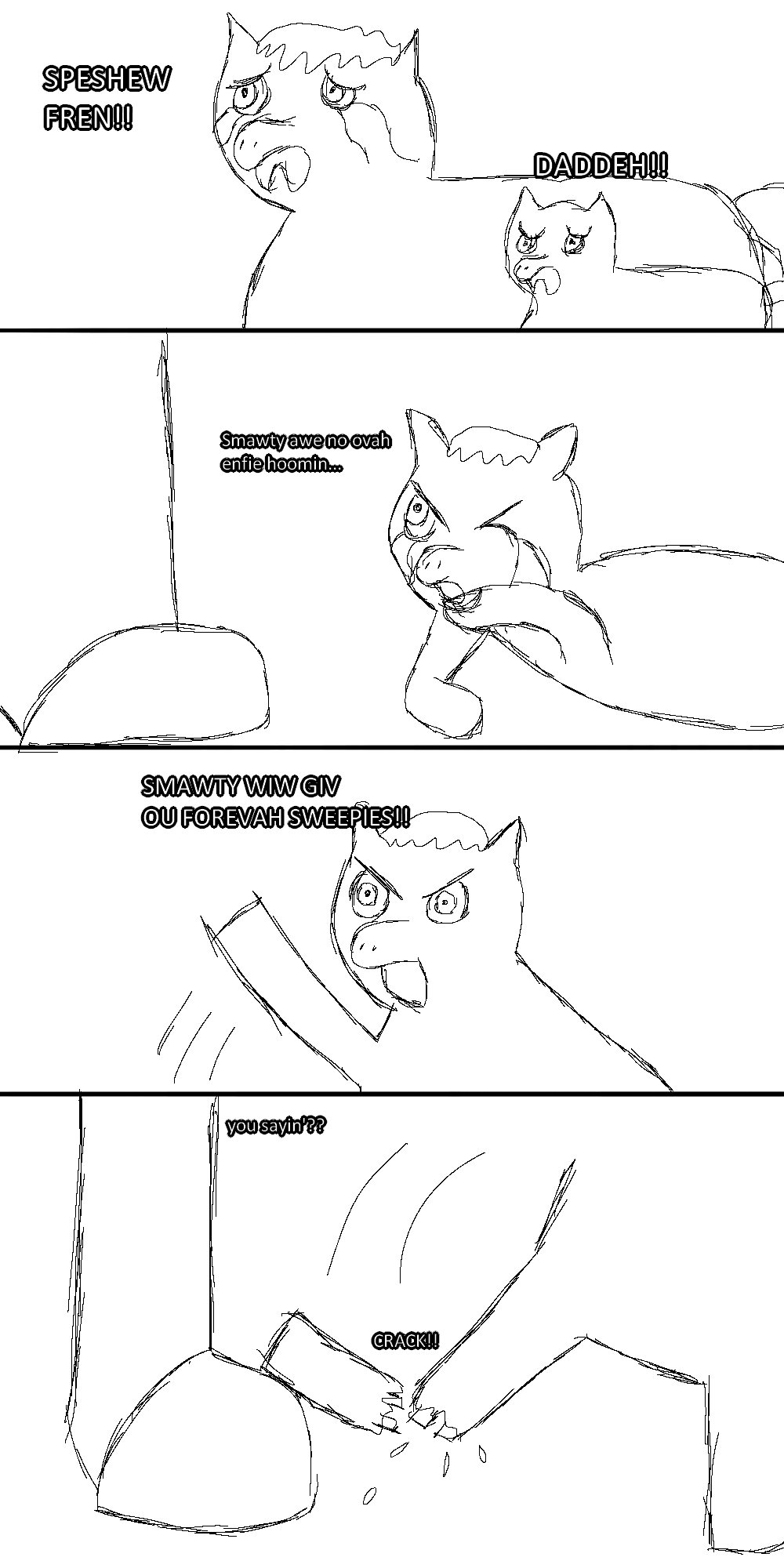 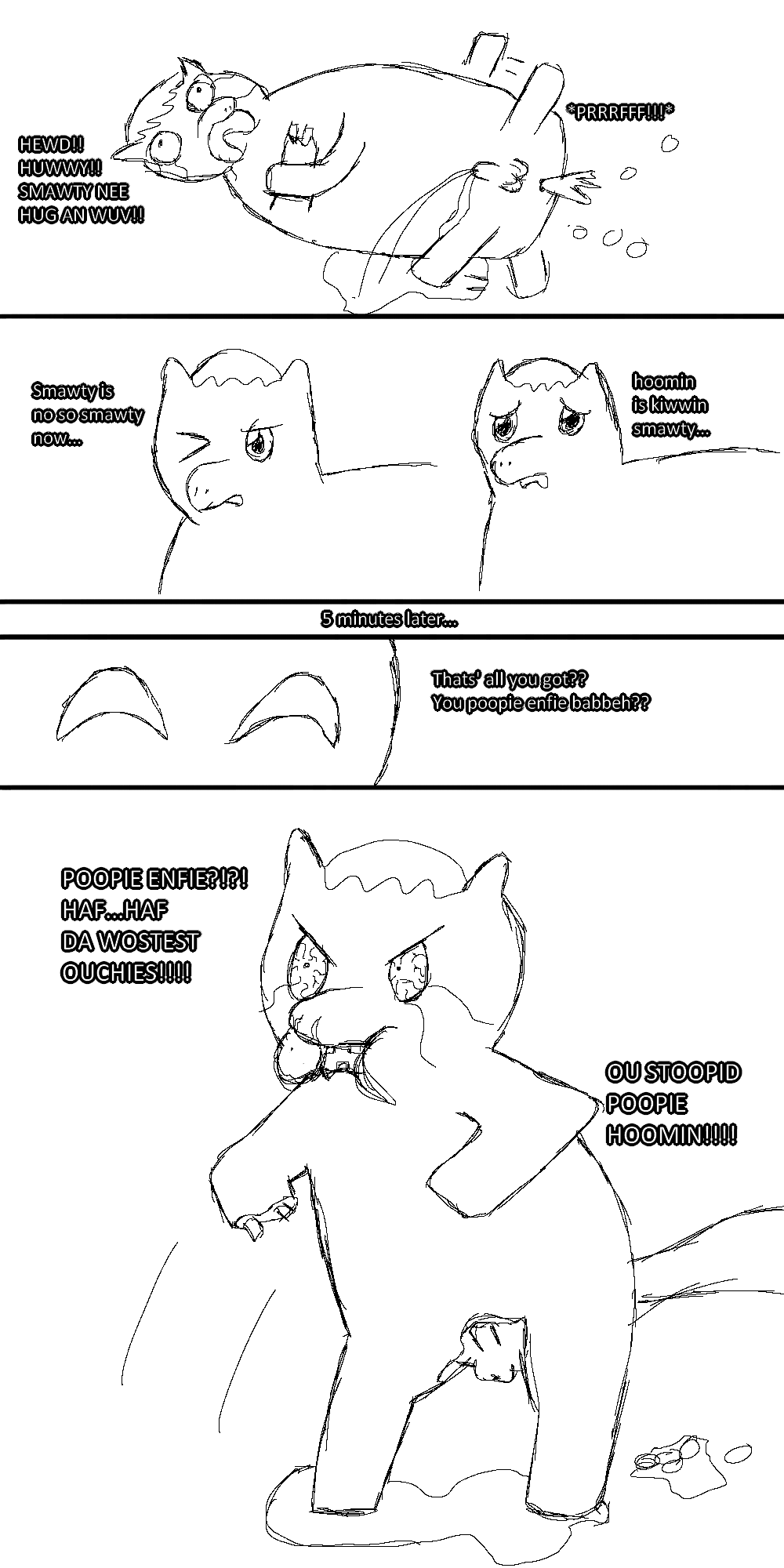 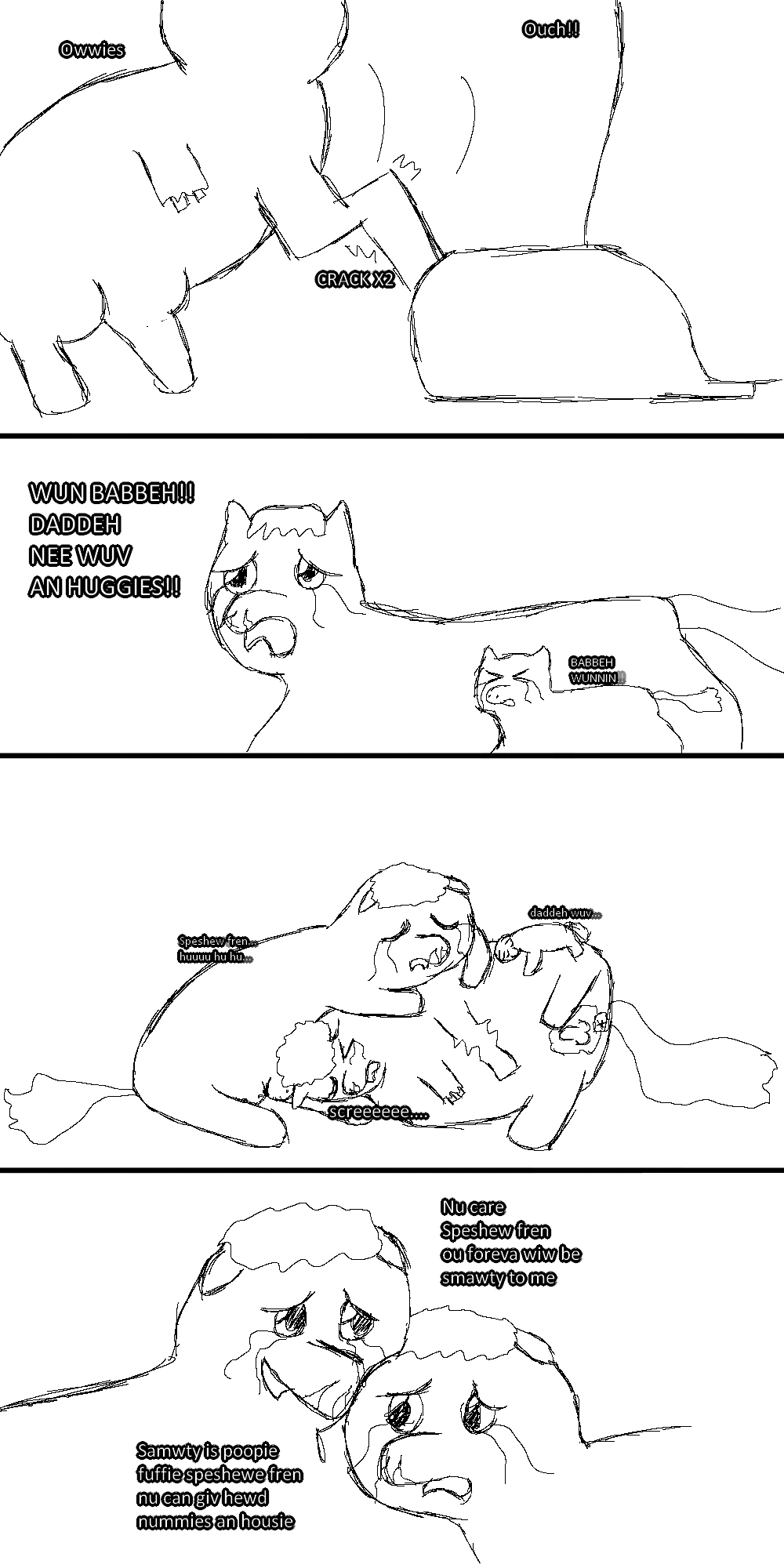 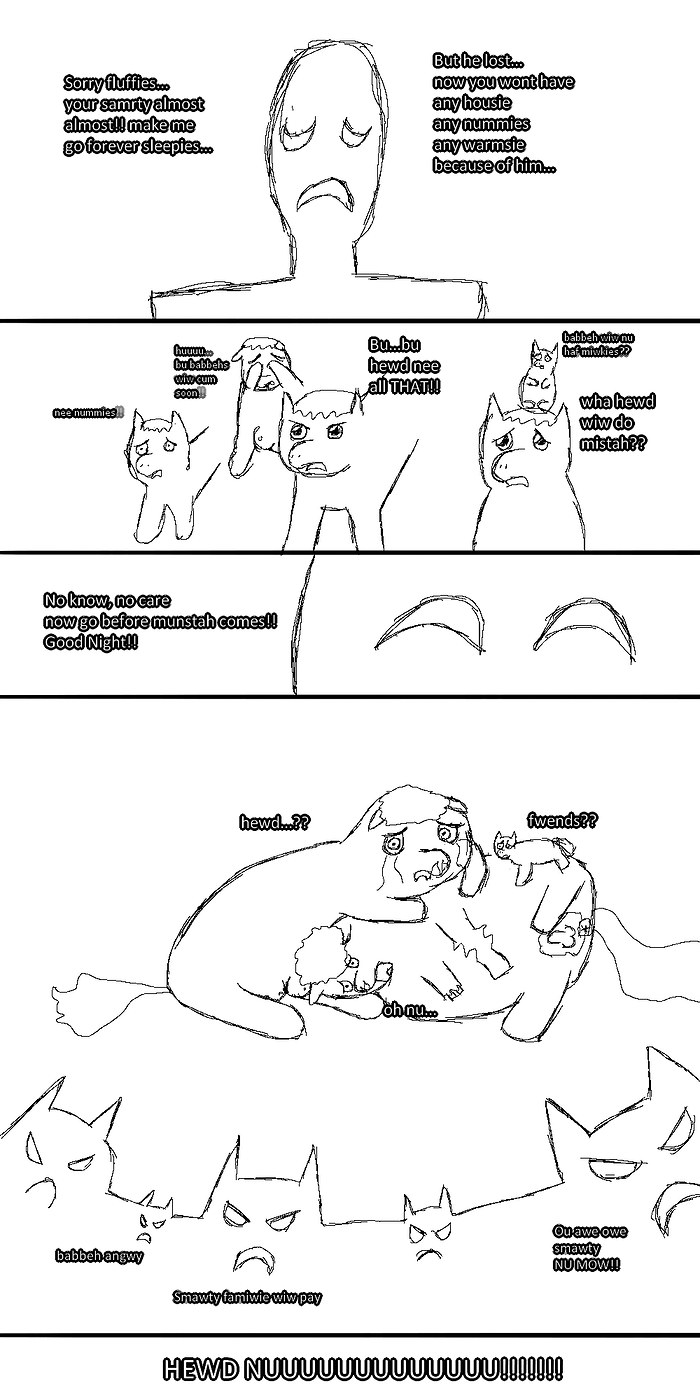 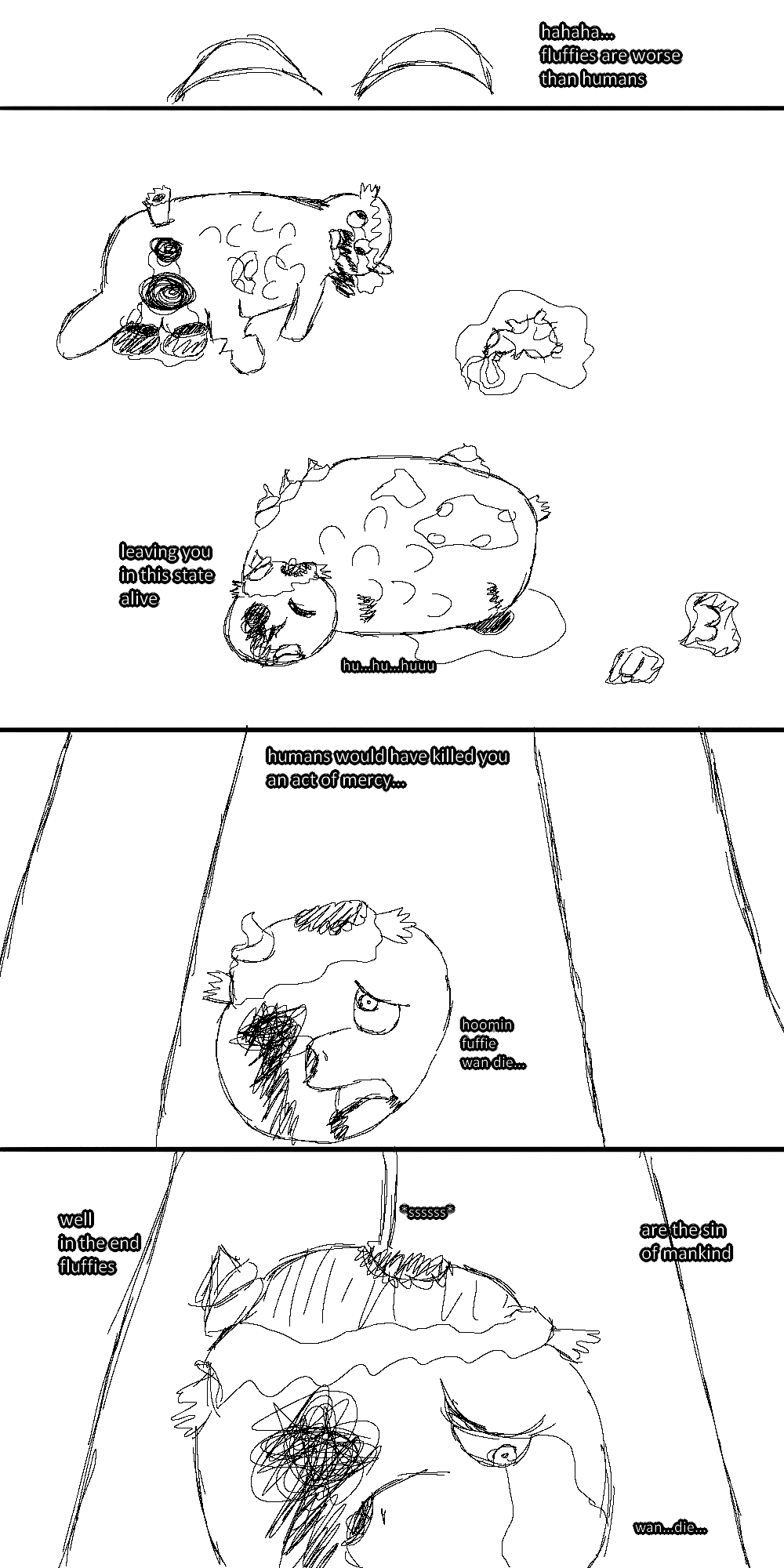 Hello!! My first large comic its done!! Its not the great art but its a great shit (

).
To be honest i was always disappointed of not seeing an smarty humiliation when he threatens a homeowner and the smarty fails before a human doing nothing but mocking of him.

I love that despair, and I hope I have transmitted it to you.

I love the first part where the smarty hurt itself, I love how the fluffies can actually think that they’re strong enough to take on a human even thought they’re like 10 time bigger? So yeah it’s so satisfying to see a fluffy realise how weak it actually is.
I didn’t like how the herd turn against the mare and the smarty but like the human said, fluffies are worst than humans.
Fluffies are absolute monsters to each other.
In conclusion I love that comic, nice art.

“With the power of love and friendship we can do anything!”
~Hasbio programming propaganda

Nice!
Not sure why they’d kill the Foal unless it was nonpleasing colors since Mummahs tend to just collect babies when available. But a very unique take that I absolutely love!

Oh that is why?
Poor fluffies

The unfortunate crossfire of mob mentality. Probably assumed that the shit decision making was inherit. Which honestly if most stories involving smarties were to be evidence I could see where they would be coming from.

I still say Smarty Syndrome being an inherited trait makes no sense. They always die horribly, even if they spread their genes by being the only male allowed to mate they invariably cause a TPK of their herd.

The only exceptions are if almost all domestics have the gene and the selection for colors proliferates it with the idea that killing the Smarty to stop the spread is just idiotic superstition that costs breeders potential breeding stock, or that the difference between a Hellgremlin Smarty and a Smarty-friend or just intelligentFluffy is their upbringing with the toxic lessons and abuse humans impart creates a Hellgremlin Smarty directly or created a Fluffy culture that causes potential leaders to end up rotten.

Is the human made out of metal, lol?

Yeah, mob mentality is the most likely answer given how the ponies are usually portrayed in stories/comics. There probably wasn’t much higher thought processes at work than “this is the worst thing we can think of to do to the smarty so that they know they’re a bad fluffy,”
along with killing his special friend.

Really, the most unbelievable thing here is that they understood that much causality.

Less of it being a genetic inheritance but like you a said a mindset. Barring mental illness or a defect (I wholly recommend gr1ms Skippy series) smarty syndrome is really just unchecked aggression. And when it comes to a species who as a whole are very impressionable and somewhat weak willed that trait/behavior is what grants you power. Throw in that fluffy teaching that to subsequent generation(s) and now you have a problem.

How long would it take the mindset to become permanent though? Depending on canon Fluffies reach sexual maturity in 1-3 months, and live 10-25 years.

I advocate for the idea being weaned and sexually mature does not mean their mind is done developing, Hasbio would not want them to have their personalities set in stone beyond training when sold, and I do advocate for the idea that Fluffies encountered are running mostly on programming because of a lack of life experience to actually learn and think for themselves.

Even a Bestest who is humping shoes should be able to be broken of it, or have it redirected into positivity.

A Hellgremlin that’s less than maybe two years old should be malleable still. Its just if anybody wants to bother.

Well at least the smarty wasn’t being selfish. He was just trying to keep his herd safe by getting them a safe place to stay. Could have done it better tho

Very true but I think at least in a situation involving ferals that means very little. In their heads their God King (or Queen) have been felled, their belief of rule/infallibility/invincibility shattered, and if it wasn’t already so the potential of their herd given forever sleepies.

If the smarty and their family haven’t been killed at this point I would imagine beyond expulsion from the herd another potential smarty would attempt to dominate the former, whether that ends up regulating them to poopie status or straight up killing them. In those instances I can imagine the new smarty might see the children as being potential threats or a means of breaking the spirit of the disgraced leader.

The sins of the father are to be laid upon the children.

It didn’t matter if it had good colors, it was because it was the smarties child that it got hurt.

Thanks!!
Actually i had think an other ending where the human give the herd poisoned sketties in front of the wounded smarty but thats not the abuse i was looking for hahahaha

Thanks Thk!!
Its like @MossyFluff and @StoneRouge say, the smarty wasnt strong enough to win the fight so its offspring will not be strong “good” smarties.

Ill plan on later comics to go deeper in my headcannon but i like fast living fluffies, like you said in a period of 1-3 months they reach their sexual maturity but theyre not adult fluffies per se and fluffies as species have a lifespan 4-6 years.
In almost all cases the domestic fluffies are docile and trainable without needing anything more than a smack and little punishment (if a were a parent i wont like finding my sons fluffy toy raping a barbie as a persistent behavior).

In the regards of the comic, ferals in my headcannon are a little more inteligent (dependign on what kind of feral) and they obey an strong hierarcy where the smarty leads the herd as a king until the smarty dies, or in this case its killed by its own herd and a new smarty takes the lead. of course these kind of smarty are different to the ones with the syndrome and actually are a little more perceptive but no always intelligent.