The Price of Mistakes (by: squidward24) 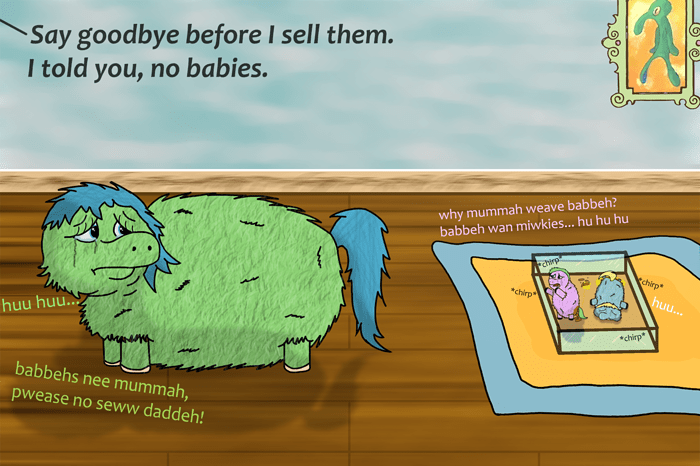 Tried a different texturing style, maybe I went a little overboard on mummah.

As Kharn said the mother, and everything else mind you, looks great!

Love this subject… dunno why, really…

, fluffies are stubborn,never listen to their owners and karma hits them hard.

Does the triggering of mare to have babbehs was by its programing or due to watchin Fluffy Tv? Or pure instinct wanted to breed?

I like this form of sadbox. The owner isn’t flipping their shit and tearing the mares limbs off, but she IS suffering because she was too stupid/ignorant/proud/naïve to obey her owner’s rules. The fact the owner let her give birth and is trying to sell the foals rather than aborting them or killing them in front of the mare almost qualifies this as hugbox.

Gawd, we’re all so degenerate

Ya, I have to pause occasionally and wonder how it got this way, but it’s usually 🤷🏼, life is just strange, innit?

Can’t really fault the owner in this. If the mare was told she couldn’t have babies, and had babies anyway, the babies’ suffering via separation when going to a new home is her fault.

in my head canon I like to imagine they were just programmed to have a single priority: make babbeh.

Makes sense and added the headache to the owner, its funny how a stallion or a mare would pops in out of nowhere even if you securily lock the house.

Things that will never be invented for the core fluffy canon: fluffy birth control (oral, implant, or shot).

Why go to the trouble of inventing that when you can just take a set of pliers to some fluffy testicles? Permanent and irreversible birth control right there

Because 1 intact male can impregnate the state of Ohio’s worth of fluffy mares! Got to get the mare’s reproduction under control. Or go all Dune like and turn them into Axolotl tanks. You’d /think/ fixing fluffies would be required by law, but I’m sure there’s more money to be made in attempting to control their populations than actually doing that

Wow. A fluffy owner having a proportional response to something a fluffy did wrong instead of doing insane horror movie shit.

I mean at the very least the foals are being sold. It could’ve gone so much worse.

It all depends on who he sells the foals to.

Does the triggering of mare to have babbehs was by its programing or due to watchin Fluffy Tv? Or pure instinct wanted to breed?

The latter, exacerbated by the former.

Can’t exactly hold the latter against them, can we?

We think about that all the time.