The "Soft Down" Fluffy (Pt1) [ SireHeartwarming ] 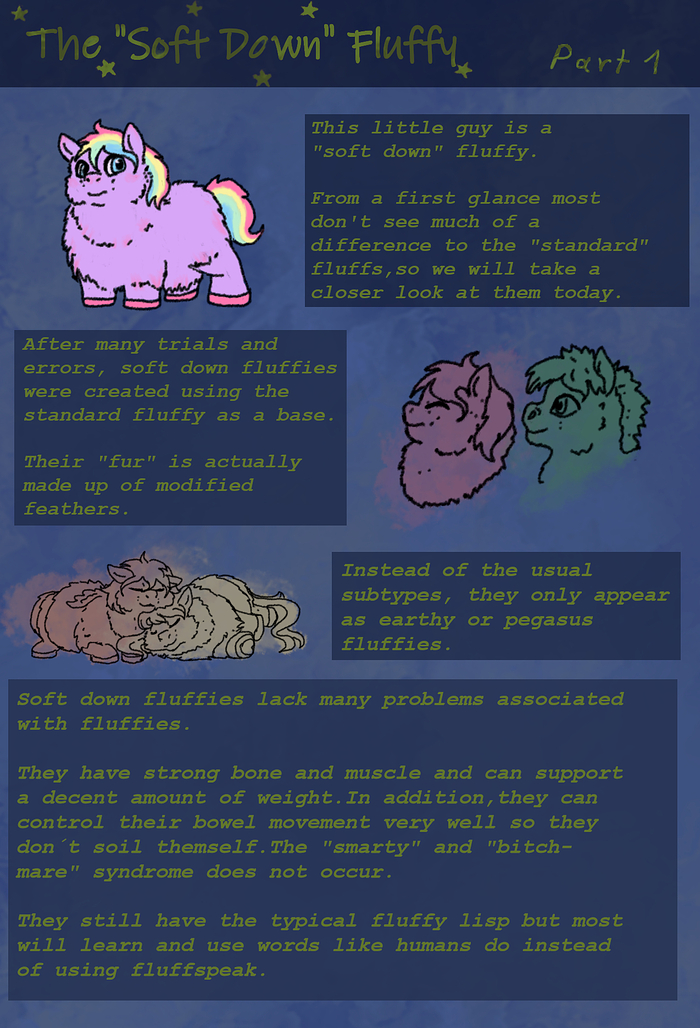 Wonder what happens if a soft down and a kitsune fluffy crossbreed.
Shenanigans, followed by what has science done no doubt.

Why aren’t there unicorn versions?

Maybe a mutation of the spliced genes can’t produce unicorns ?
I mean Kitsune fluffies are mostly earthies.
Because they are already so spliced with other dna and designer bred that kitsune fluffy unicrons pegasi and alicorns, are usually monsterous mutants with massive birth defects that are not viable for life.
And usually die minutes after birth.

How cute! I can only imagine how soft they must be

I feel these sorta fluffies take the fun out of fluffies to some extent lol. They’re just kinda boring to me because they are too perfected. What do you get if you have a fluffy with no horns, unique personality traits and with increased durability as well as more human like speech and intelligence? A fluffy without any real charm. Nevertheless, I like your art and appreciate your contribution to the community.

I’ve always had a certain level of distaste for Fluffy subspecies which I perceived as being too normal, maybe it’s because I like when you can really justify calling them shitrats lol.

*pushes you to What if we create community stories about the same fluffy? and MicroFluff: Fluffy Processing: Chapter 3: [by SilverOwl] *
I think you and @Cecona , could do well there.

One of the softest most pettable things known to man or god.

if they can control their butts and don’t have smarties, i don’t believe it gets to be a fluffy. what’s the point

I love the dreamy night-time color scheme you have going on for the background!

For those fussing over the lack of drawbacks: I wouldn’t worry about it. All the things that were removed (other than having horns) seem like things commonly avoided for hugbox content anyway, and if you remember the herdcanon that every artist’s fluffy content is a different fluffy breed? I would say Soft Down fluffies could also be called the SireHeartwarming breed. Double the cuddly softness, half the trouble.

Why aren’t there unicorn versions?

For safety reasons.
As more parts come out, it will get more clear why.

What are the downsides?

Depends on what you see as downsides.
Not having unicorns and alicorns is one of the downsides for people who want them.
That they confuse other fluffs with their speech patterns could be another.
Some people are allergic to down.

There are certainly going to be more as new parts come out.

tell me, what’s the point of getting rid of all major flaws and not using it as opportunity for adding some of your own brand new major flaws?
example: their heart is not strong enough to support a strong body like that. because of that they are running out of stammina pretty quickly, require a special diet and sleep 12 hours a day. extreamly high risk of a heart attack if they overwork themself. because of this it’s not recomended to leave them at a daycare for more then 7 days in a row, because their desire to not be left out from playing with other fluffies that don’t have problems like that is way stronger than heart palpatations they are getting

Dear Mr_Owl,
this is only part 1 on the “Soft Down” fluffy.
The removal of these specific flaws is important because they were made to do certain jobs which I will elaborate on in later parts. There are for sure going to be other flaws that are specific to these fluffs even if you may not see them as major flaws and thats okay. They are my fluffs after all.