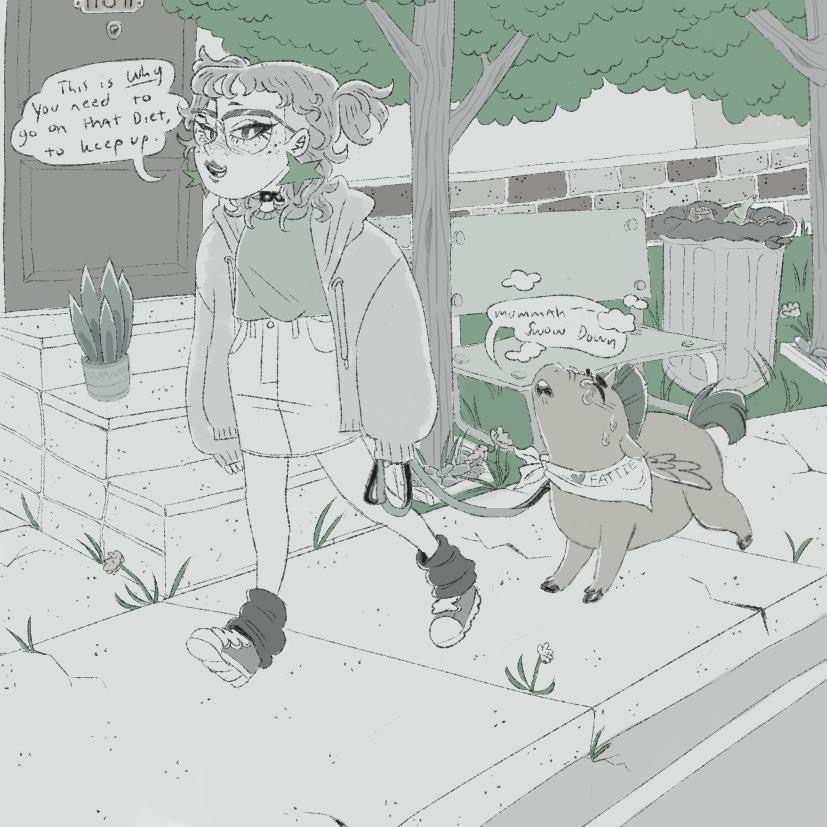 walking frank; he was found as a runt alicorn baby being neglected and the sympathy of that childhood caused his owner to feed him WAY too much, except hes gotta deal with losing it again now that hes grown out of the chunky baby stage.

living in the cleveland area, so the fluffy community has been like a funny inside joke everytime i walk outside and think of it being littered by fluffies(or should i say destroyed by them) me and my friends like to call it skettieland amongst ourselves hehe

also!! i love hugbox and it tends to be the only thing i can come up with; HOWEVER im so fascinated and in love with the abuse aspect of fluffies, so id love some abuse recommendations to draw up for myself!!! i just cant come up with them as much as id like

plz dnt try to touch frank tho hes my baby <3

I’m in this picture and I don’t like it.

I started with smarty abuse and bad parent stories. it’s very easy to come up with ways to abuse the bad ones

and you can make it your own and add your own twists and turns to it! With a bad parent you can evoke emotions for the abandoned/neglected foals and spoil the “bestesh” just to give them a nasty comeuppance in the end for their bad behavior, hope this helps!

Thought that was a bib instead of a bandanna. xD

The curse of having a runt: we often compensate there past with over feeding them and neglecting to encourage them to exercise there extra three, four, or five bowls of skettis and treats.

I’m so guilty of this…

living in the cleveland area, so the fluffy community has been like a funny inside joke everytime i walk outside and think of it being littered by fluffies(or should i say destroyed by them) me and my friends like to call it skettieland amongst ourselves hehe

We are not worthy.

Playing corrupt a wish feels like an untapped goldmine in regards to fluffies.

Take a sharpie to a bandanna, write ‘kick me’ and give it to a feral as a gift. Alternatively ‘Im with stupid’ with an arrow pointing up and to the left and right.

Gather the expired dry ramen from the convenience store dumpsters and make batches of spicy/weird flavor varities as you walk around. Or if you like a particular fluffy feed them a normalish flavor.

Get a pair of pocket mirrors. On one draw a horn, on another draw wings. Show the horn one to pegasi. Show the wing one to unicorns.

Buy stuff at garage sales cheap like hampster balls etc and use them on several bestest babies and then let the mares fight to rescue their child before they run out of air due to scaredy poops blocking the air slits.

Glue a block to the ground, or if you really want to confuse the fluffies to a wall only slightly off the ground so it’s still in their eye level and reachable.

Show ball. Pop ball with knife in front of fluffies. Refill ball with quickdry cement or something hard/heavy the next day and let them injure themselves trying to play with it.

Great sense of style and location in this scene. Looks like this isn’t your first rodeo.

such an honor! was just admiring your work earlier which caused me to finally really want to post instead of just drawing for myself! thank you!

haha these are awesome! ill definitely get around to doing a few and theyre definitely very starter grade for me so thank you!

Your new ‘just my pfp’ piece gave me the following idea.

Trapped stuffy friend - ex: pour itching powder into interior stuffing so each time its hugged a little bit gets sent to the surface cloth.