And so we come dear friends to the beginning of the end. I invite your to see our players. Entering stage right, arrogant, surrounded by sycophants, resplendent in clean golden fluff we see our villain. His name is Xerxes, and he believes he is master of all he sees. Tonight is the culmination of years of gathering power and planning. But there has always been a thorn in his side. A bit of sand that refuses to come clean and it drives him to madness. Tonight for good or ill he will be rid of the pest.

To our stage left, sitting raised, alone, resolved, armed, and prepared for death in the greatest of warrior traditions, our hero. He would not call himself as such, not anymore. For to reach this point he has burned his home, left his children, and understands and hopes to atone for the arrogance of his youth. His eye bears the scar of a great battle past, but his heart bears scars and burdens that would make any of a weaker constitution cower. It is these ghosts, these memories that drive him now to stand alone against the oncoming horde, here in our final act. He has prepared himself, weapons close at hand, fluff streaked in a chaotic pattern of mud. This will be his stand, mark it, and behold, the end of Leonidas, son of Rambler who died in battle against a wild dog, and Flower who with her last breathe commended him unto the arms of Anonymous Yernamehere. The Little Lion, the SnakeSlayer, the Defiant One, the Herd King, lover of she who was Nike, father to she who is Artemis, he who is Duke, and he who is Maximus and last but very much not least, finder and brother to he who was Clyntius. Mark his visage and his fall dear friends, for there may never again be his like upon this earth.

This entry is written in gratitude to all the readers who have stayed with this story from its humble, humorous beginnings, through its heartbreak, and stand resolute to see the journey through to its end. The author invites all readers to play a selection of music they deem fitting for the scene, as a method of encouraging the atmosphere of this, our final clash. For the purposes of proprly telling the events contained herein, there will be an intermission and an epilogue…

Wittew Wion Fwuff 19 (or “The Reaper is the best of friends, for he does not mind to be kept waiting, and he always appreciates additional company”) by Motowhed.

Xerxes plodded along through bramble and brush. Sticks and low branches were swept aside for him but that still did not prevent him from gathering thistles, dirt, or beads of water in his fluff. The outdoors was unacceptable and he made a mental note to never step outside again if he didn’t habe to. Following the fat purple fluffed, grey maned dummy smarty, his mute band of black eyed silver maned and tailed bodyguards and soldiers trampled as much brush as they could in his path to prevent his discomfort. He would habe had them carry him, but Xerxes was enormous and weighed enough to crush them and they did not habe a bier upon which to carry him.

In the distance smoke began to rise, right in the path of where the purple fluffy was leading Xerxes and for the first time that night he felt apprehension. Was this idiot seriously leading them towards a fire?

The smarty cleared the last stand of tall grass and came to the berm at the edge of the clearing leading to what had once been the fallen log nest.

Leonidas stood, back-lit by a raging inferno that had once been the fallen tree, one sorry stick in the dirt next to him, the other, laid at his hooves. The waited silently and searched the approaching horde until he found Xerxes.

Leonidas, picked up a pebble, and kicked it as hard as he could. It arced over the open ground between the horde and Leonidas, coming down to smack a Xerxes purple fluffed companion with a hollow thockbetween the eyes.

“Siwksees, com n take dem!” Leonidas called. And then he pointed across the clearing at the purple former smarty with the grey mane “Juu! Twaitow! Cowawd!..May juu wib…foweba…”. The Fat purple smarty made a small “eep.” sound and waddled away as fast as his bulk could carry him. And here he passed from this story, wandering the world, until at last, he found himself in Scotland. But that is another tale.

The first of the black fluffies began to advance and Leo snapped the little sowwy-stick up between his teeth. “KIWW HEEM” Xerxes raged and the black eyed, black fluffed, silver maned fluffies began to charge. Reaching the edge of the berm they tumbled down into Leo’s sharp stick trap. With wet tuds and squelched they fell on the points sticking up from the dirt, mouths open in silent screams. The few that managed to spot the sticks and stop were bowled over the edge by their charging comrades and ended up victims of the trap as well. As more fluffies poured over into the clearing Leonidas took another of his strike-anywhere matches from the stranger in the park, and lit it between his teeth. Spitting it so it tumbled into the dry brush to his left, there was a responding crackle as the grassed caught wildly and the fire spread, creating a wall of flame that consumed outliers along the flank of the horde. No longer able to circle and surround the fluffy, the horde was funneled into a kill zone in front of the burning nest. And Leo finally struck.

Gripping his little sortystick between his teeth he ran into their ranks, bowling over fluffies, swinging and poking with the fang tipped stick. The venom left in the fang was quickly used up, as fluffies began to drop and foam and make horrible choking noises at the slightest scratch. Leo turned his head and lost the stick finally, as it impaled a black fluffy and became trapped. Retreating gracefully Leo snatched up the second little spear and went back to work. Soon there was a mound of fluffies piling before his crashing hooves and slashing spear. And it still wasn’t going to be enough! He was tiring, and being driven back. The black fluffies seemed to care little for their fallen comrades, only noting them when one fell so they could step over him to take his place. The fire was enough to funnel them into a tight area where thier numbers meant Leo could not be surrounded. But the oncoming press of their teeth and hooves was wearing him down. Even the venomed stick wasn’t enough to keep them at bay and it appeared as if Leonidas would fall, vengeance unrequited, scores dead before him, but his goal ultimately out of reach.

But Leo had once more idea. One that had come to him late that afternoon before he had rested and waited for the horde. He stepped back, back, back…and snatched a burning branch from the mouth of the nest. Swinging the branch like a club he struck out at the black fluffies surrounding him, who instantly blazed alight due to the thin easily sparked fluff. Their pain and fear caused them to race around bumping into each other. The conflagration spread, fluffies diving into the creek to avoid a fiery doom where they drowned in the swift moving, if shallow current. More and more fluffies were taken in the flames as they pressed in, only realizing to late the danger they faced. It was this act of what would typically be madness to a fluffy that broke the remainder of the horde. Leonidas used his branch to combat the remaining black eyed fluffies until the branch grew too hot, too close and he cast it into the face of a silver maned soldier, who let our a soundless scream, bucking and spinning as he tried to douse the flame. Leo dove and slid into the mud at the creek bed, rolling in it to protect his fluff from the flames and when he arose, dripping mud from his flanks he moved forward, striking fluffies who attempted to charge him, catching his breath. It was easy work compared to the manic combat he had just experienced, for the horde had shrunk to a mob and begun to scatter or die in the ruins of his former home.

Leo walked steadily, huffing and steaming up the berm, until at last he faced Xerxes, the two separated by only a few feet of space. Xerxes looked around, observing his fallen army. The sheer insanity, one fluffy had shattered his guard of immortals. One single fluffy had done what no herd had ever come close to. And yet here he stood, and for the first time in his life Xerxes felt a very real chill of fear run up his back.

The pair regarded each other in silence. There was nothing left to say. The hatred, the rage, and the sorrow were already in the open. Lightning smote the sky open above them, thunder rumbled as if the opening bell in a championship title fight, and it began to rain…

GOD DAMMIT! *i am gonna kick your ass
*if you don’t put your name in the title

L-look i don’t want no trouble man! Put down the sorry stick. We’re all cool here! Its cool! (scurried off to add the name) 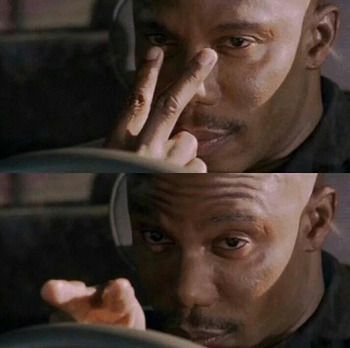 I wonder if those black eye toughies are some genetic fuck up, or if they are subspecies

Working on that. I think they’re Xerxes sons, culled from his unwilling harem and given a touch of…something else.