You won't be needing these anymore by swiftbitches 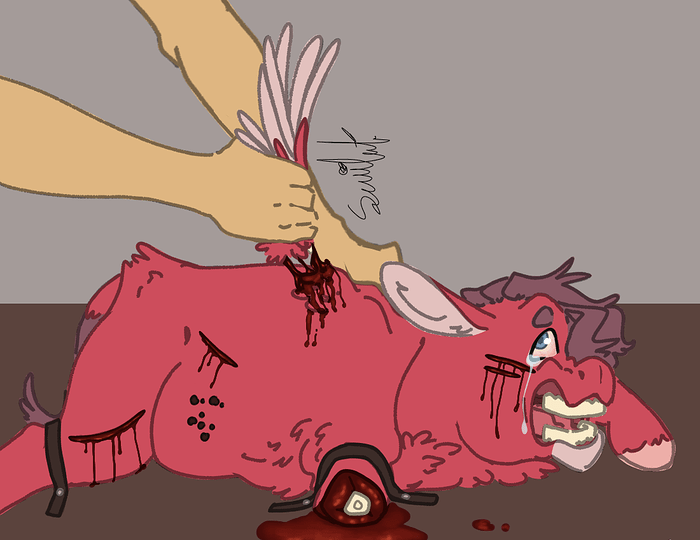 Nooo thats too much poor thing

Good job swift! Love the colors and the gore

Dunno what that pegasus did to deserve that, but I can confidently say it deserves every bit of it.

This should be like fluffcannon, like other unchangeable aspects regarding fluffies (like fluffspeak, naivete, love of bright colors, etc). Killing a fluff to eat, but keeping it calm and docile and happy even through the end just takes all the fun out of eating fluffies

Every story I’ve read has fluffies suffering up to the point where they’re cooked enough to die.

This isn’t the way I would harvest meat, but to each their own.

Ripping off has gotta hurt worse than chopping off.

Especially if you slowly increase the pulling, slowly pulling the wing out of the socket and ripping and tearing the muscles painfully

Fluffcannon, that’s fucking awesome. Fluffies are made to be tortured so I guess they would taste best tortured

Some peeps have it where stressed fluffy meat tastes bitter or just worse in general (since stress hormones in real animals apparently can ruin the meat). So fluffies are treated to hugboxish lives and then killed in their sleep or with a painless method. I know headcannons are headcannons and you can’t be wrong, but eating fluffies without fluffy suffering just feels… wrong. Like eating pizza with a fork and knife, yeah nothing says you can’t, but it’s just weird.

Pretty much on par with medieval torture stuff.

I’m not sure the logic though. Hasbio made them to be pets, they’re a mix of a shit load of things but always partially human DNA, and they’re unfinished prototypes.

How would any of that logically make them taste better or worse based on stress?

Though I admit I don’t get how they would taste good at all. They’re mostly hair and fat, removing the former would be a pain without bullshit hair remover magic shampoo that somehow isn’t toxic, and the latter is usually a negative for meat lovers unless you just want gravy. They lack the size necessary for large cuts of quality fat for meat strips, so unless the carnivore is the type to eat two bites of a dish, down a glass of wine, then fold their napkin and pay the $130 bill there shouldn’t be a logical appeal.
Their bones are too small for soup too.

The only way I can picture it being worth it on an industrial scale is some stupid cultural movement like shark fin soup and bird nest soup had, or if you had a breed with heavy musculature, was at least the size of a pig, or they had only cartilage with no bones so they could entirely render down into stock.