A heart of darkness - Greedy mare (Commissioned for RandomAirPeople) (InfraredTurbine)

Hello,
So, this is a part of some arts I have commissioned for RandomAirPeople.
I did this some days ago, but I was waiting for him to post the part of the story where he reaches this part, so it wouldn’t be a spoiler for ppl xD.

Part 13 of his story " A Heart of Darkness" https://www.reddit.com/r/fluffycommunity/comments/n0h6zi/a_heart_of_darkness_chapter_13_retribution_part_i/ 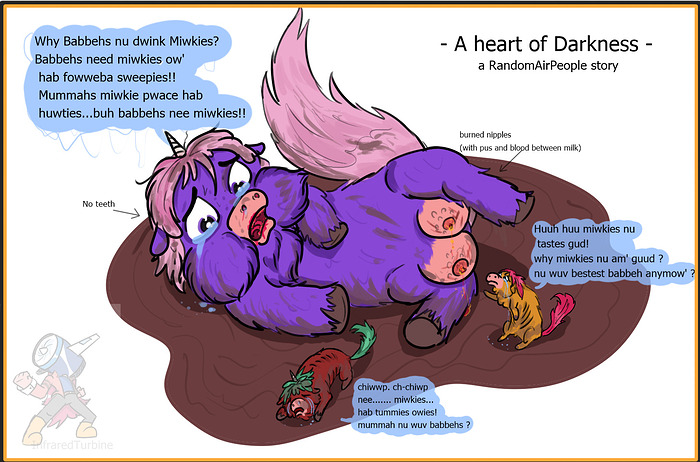 With burned up teats, I guess no foal would like the taste of it, right ?

For commissions, please feel free to contact me any time!

Sooo she somewhat ate something hence the title so the punishment is teeth off and a tortured tits, poor foals all thin and dying

even tho after doing something really bad, she still acting like a bitch, sooo xD

I haven’t started this one yet but imma read all stories you make commissions for.

thanks man, kind words of yours <3

All of her babies. She stomped Chris’s foal Truffle to death, splitting his skull open. She was livid and besides herself that a “shit-eater” had an objectively better life than her best baby (the equivalent of a prince in their herd). The best formula, a super soft bed, a painstakingly built saferoom with all the top of the line toys a fluffy could ever dream of. What set her off the most, was that the brown foal had a name while she and her brood did not. It was unacceptable, and Truffle would need to pay for this injustice.

Now I’m not saying what Chris is doing is the right thing either, in fact he goes completely off the deep end. Its part of the theme of this story, because in the end violence doesn’t solve much of anything. However in the short term its making Chris feel better, he feels immense guilt that he couldn’t save his foals. They were still very much babies, they couldn’t even flee the saferoom from these other monsters. The herd showed no mercy for his foals, thus he will return the favor.

Its on the FluffyCommunity reddit, its called “A Heart of Darkness”. So far thirteen chapters have been written, with about 5-6 left to go.

Only thing she can eat at this point, is the softest food known to any desperate fluffy: Shit.

Congratulations, you’re reaching levels of pity and misery in your fluffies I didn’t believe possible!

Don’t feel bad for this bitch, read the story. Poor Chris found happiness and fulfillment in raising some fluffies, only to have them be killed by this bitch and her herd.

Thank you for the back story, Im surprised these ferals would go bonkers on an owners own fluffies, geez jealousy was like a kill mode for ferals and smarties? Do most ferals invade a house seeing other fluffies have better life than them?? Poor Truffle

seeing her bestesh babbeh all thin and dying makes a satifying punishment and her without teeth, chris would have just smack her with the rifle butt.

the link for part 13 is linked in the beggining of the post, there you just go to his profile and there you can find all 13 parts to read

Smarty, racist/coward Mummah, rapist, and the Babbehs that are loyal and echo the behavior of their adult are almost all Fluffy villains.

Saw that on NekuChan’s When Winter Comes so does Karma, the mare saw Rex (a poppie baby) with toys and happy she was angry and without thinking (as always) rush to kill him and suppose “take over” everything for her and her bestesh babbeh but ended up entangled in the bushes and die and her suppose bestesh babbeh run over by a car.

such a great story

Im surprised some mare THINK that killin an owners fluffy and have her and her bestesh babbeh would be welcomed if they kill its original pet. They just welcoming murder on them. Like your current story.

RandomAirPeople objective is to show specifically this
this herd is so used to win against difficult situations, that they just can’t believe that it all is going down in a bucket of fire now