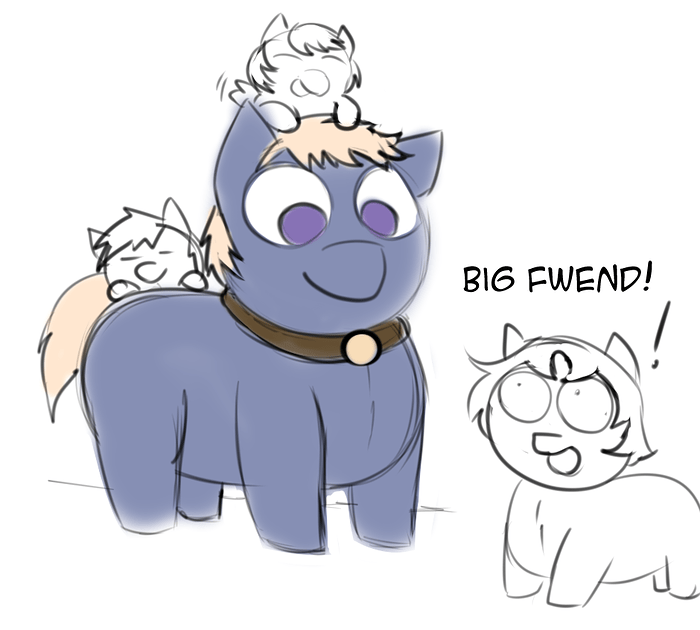 Its a shame that Goliath became an antagonist in Fluffy Runner. He does seem like a nice guy, and reminds me of simialr large fluffies in the past.

The prequel-sequel about him seems to confirm that. He was rough with milk mares growing up and taking care of Shibug but his actions do seem to come from good intentions, which made me happy to see him getting properly adopted

Sadly, as you know, it’s not uncommon for humans to deliberately pit fluffies against each other, and big fluffies make perfect tools for these.

The saddest story in that line, imo, has to be Simmer. Poor girl is manipulated into killing other fluffies for her master’s profit and amusement, while all she wants is his love. sniff.

Goliath probably has a similar backstory.

I still have to get round to researching Santanon. Santanon would be the one of the last artists I’d research due to the volume of his work. Coming to think about it, I would have put KMEB in that same pedigree, but KMEB’s depiction of a fluffy city seemed so in line with Mutagen’s depiction of Greg as an intelligent fluffy.

Part of it is true in the sense that cockfights and dogfights are a thing in the world. But we also frown upon such things in our society such that they “shouldn’t” be common. I get that its not the same for all canon, but its also why in a domestic canon I’d rather see such actions as illegal and frowned upon.

I’m not sure the fights were legal, strictly speaking, or simply decriminalized, it’s been years since I’ve read them. But yeah, I’d say Santanon had as big an impact as KMEB, especially since he was around for much longer and was enormously prolific. He inspired many in the community–he once drew a picture based on one of my comments, I was so proud. I still have that somewhere…

His weird shitty training with shitbug was the worst for a damn project that facility been doing. Why shitbug died.

He stomp the mares for not giving shitbug milk guess he felt that sadness on his late brother.

He reminds me of the cave troll from “LotR: The Fellowship of the Ring”:
Probably a nice guy, but made the wrong friends along the way.

How big is Goliath for a human?

Good question, on Jbergs drawings he looks at least twice the size of regular fluffy

If a full grown Fluffy is normally the size of a terrier, Goliath would be a fat boarder collie?