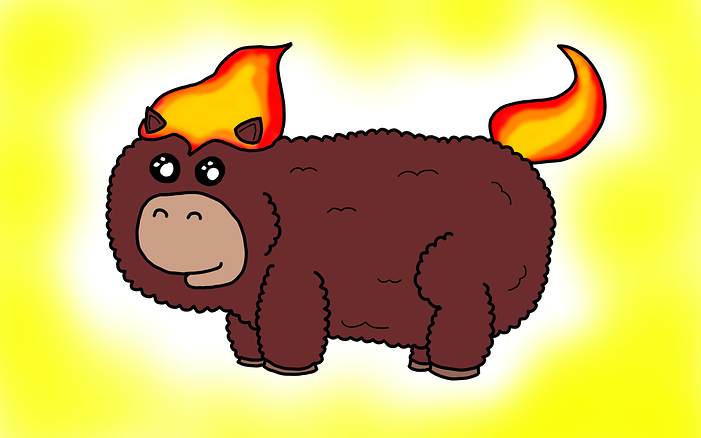 Jolene was not in the mood for this. She was having a nice evening at home with her pet fluffy, Cayenne. They were making chili. Then there was the thump at the front door, and now there was a smarty, a mare behind him with babies on her back, and what looked like a herd of about a half dozen more fluffies in her front yard.

“Can ah help you?” She asked, in her slow drawl. The red smarty glared up at her.

“No, ah don’t think ah will. You are interruptin’ my night, while my fluffy and I are making dinner. Ah am going to ask you to git’!”

The smarty had been creeping forward while making his demands, nosing his way over her threashold. Jolene had noticed and slammed the door in his face. She smiled to herself as she heard a thud on the door and a muffled cry of “wowsted huwties!”.

Returning to the kitchen, Cayenne was waiting for her on the counter where she’d left her. Cayenne was a smart little thing. She knew getting to close to the edge would get her hurt, she knew touching the “stabbeh toysies” would make the “boo boo juice” come out of her hooves. Cayenne was there to do one job, and one job only: taste tests.

“Who was dat, mummah?”, Cayenne asked her mother in a squeaker version of Jolene’s accent? “Was dey commin’ fo’ dinnah?”

“No fire-butt, they were some bad fluffies, and I turned them away. Any more of them, and I would have wished them a ‘bless your heart’.”

Jolene looked to her fluffy. Cayenne sat on her rump in the center of the counter. Her tricolor mane and tail like soft campfire flames wafting gently as she bobbed her head and wiggled in place. “Cayenne, have I told you lately that you are just the prettiest little thang? Can’t believe your momma called you a poopy baby!”

Cayenne perked up even more. “Ya did mummah, but Cayenne awways wike mo wub from mummah!”

Jolene moved to the slow cooker on the counter. She didn’t like open flame around her fluffy, and the slow cooker was never hot enough to actually hurt Cayenne. Plus it made the best chili.

“OK fire-butt, do you remember the recipe?”

Jolene proceeded through the rest of the recipe with her Fluffy, adding plenty of cayenne, red pepper, tomato sauce, crushed red. Jolene liked her chili hot. Cayenne lived up to her name and liked it the exact same way.

Ingredients added to the slow cooker, Jolene and Cayenne retired to the living room for the night to watch FluffTV. Cayenne was tough, but she needed to be held through Fluffydale, the grim life of a feral always something that disturbed her.

Jolene put Cayenne to bed her in her safe room, and moved off to her own bedroom. The faint smell of the chili filing the house, promising to be an absolutely magnificent breakfast for the both of them.

“The fuck am ah lookin’ at out here?”

Jolene had just set Cayenne down on the patio table, along with two piping bowls of chili. Each bowl steamed in the cool morning air, a small mountain of cheese slowly melting in to each.

“Mummah gonna say more bad words, fire-butt.” Jolene looked out over her back yard. Planters knocked over, feces in piles everywhere. Flower beds pulled up, the chewed remains of daffodils scattered about.

Jolene looked down at the same red smarty that had disrupted her time with Cayenne the evening prior. She could feel her blood start to boil in her veins.

“Bless your heart mister smarty, you have gone and put me in a mood.” Jolene glared down at the destructive little creature.

Jolene looked over the Caynne. “What do you think baby girl? Should we show our guests some southern hospitality?”

Jolene looked back to the smarty. “Well sir, I don’t have any spaghetti, but I do have something even better. I have chili. Cayenne and I have a whole pot of it that we just can’t wait to share with you and your herd!”

Jolene brought out the whole pot of chili, along with a stack of bowls, enough to feed the whole herd. She set the bowls on the ground and ladled a generous portion for each fluffy.

Jolene pulled a heaping spoonful of chili and stuffed it in her mouth. She chewed thoughtfully and swallowed. She made an exaggerated shiver and smiled at the smarty.

Cayenne leaned in to her bowl and began to scarf the chili greedily. She brought her head up, her light brown face fluff stained red with tomato.

Jolene pulled out a paper towel and gave Cayenne’s mouth a good wipe. “There you go Cayenne, all cleaned up!”

She turned back to the smarty. “Ya see? Perfectly fine to eat!”

The smarty looked at Jolene and Cayenne, looked at the bowl, and then looked at his herd. “Hewd come get nummies!”

The gaggle of fluffies trotted up to the bowls and together they started devouring the chili.

“Did we make it right, Cayenne?”

Shortly after they had finished downing their meals, the feral herd began to learn the meaning of ‘slow burn.’

“WOWSTED MOUF HUWTIES!” the feral fluffies were all screaming and running in circles in the yard. Jolene didn’t even care that they were shitting all over her yard in their pain and panic. This sight alone was worth it. Cayenne was giggling on the table watching as well.

The creature, no larger than a house cat, bounced of her shin.

Jolene squatted down next to the smarty. The pandemonium was settling, and most of the fluffies were on their sides or backs, softly weeping.

“Cayenne, I have a question for you.”

“These feral fluffies invaded our home, and we showed them hospitality by feeding them. And they thank us by attacking me! Is that how you treat your host, fire-butt?”

“I think you’re right, Cayenne. I think it’s time to throw out these unwelcome guests.”

Jolene grabbed the smarty by his scruff. The sudden movement shocking him out of his daze after his rebound from Jolene’s shin.

“BAD UPSIES!” the smarty shouted. Jolene turned him to stare him directly in the face.

“You interrupt my time with my friend, you destroy my property, you eat my food and then attack me. You are no longer welcome at my home.”

“Gib sowwy-poopies to mean hoomin!” the smarty replied. He had angled his posterior to point at her. His face was scrunched up and he looked ready to burst. But his sorry poopies were a non-starter.

“And then you try to shit on me! Looks like the chili did its work though. Your tank is empty, friend.”

Jolene hoisted the smarty above her head. “All you trespasser better git! This is Cayenne and Jolene land! Anyone not going pronto, gets removed like this smarty here!”

Jolene held the smarty one handed in front of her, wriggling in pain as she tightened her grip on his scruff. She swung him down, behind, and over her head, letting go at the last moment.

The smarty sailed over the yard, in to the adjacent field and landed with a dull thump.

“Y’all come back, you end up in the chili pot next time.” Jolene glared daggers at the rest of the herd. Their terror had overcome their pain, and they scattered in to the field.

She sat back down with Cayenne. “Mummah mood bettah now?”

“Yes Cayenne, mommy’s mood is better now. Thank you. We’ll hose the yard down later and then we’ll go to the store and buy more daffodils.”

@Gal-with-pastels graciously let me adopt Cayenne in her rejected foals adoption drive. I let the character name drive the story. I want to eventually follow this up with an origin for Cayenne and her love of spicy food.

I also wanted to try my hands at an abuse story, but I’m not confident enough yet to go particularly hard. Again, I think I’m best with a low key approach. I also really wanted a character to just YEET a smarty.

Shoutout to @Morton26 for “Fluffydale” and some worldbuilding around FluffyTV.

Well that’s fast.
I like to think i’m fast but I am also a lazy twat.

I haven’t done free writing in a really long time. It’s been nice to get back in to it. I’m not bursting with story ideas, but this sort of stream-of-conscious improve storytelling is fun. A couple ideas that seem fun together rattle in my head, and then I just sort of drop a story to use them.

Neat. This was fun to read, plus I really like the idea of a fluffy who’s into spicy food.

I imagine it takes some time to get a fluffy used to spices. Like how toddlers in India eventually grow up able to eat the spiciest curry on Earth.

I’m pondering the headcannon, but that’s going to be part of the origin story for Cayenne.

Thank you for the compliment and thank you again for the adopt! I’ve got ideas in mind for an origin story. Do you have any specific cannon about how Paprika and Mustards foals were put up for adoption?

they were just put up for adoption by they’re owner dee dee Bixby, who runs a Shop called little miracles , a place that abandoned foals that are alicorns or bad colored get a second chance.

both Paprika and mustard wanted they’re babies to go to good homes, and perhaps see them when they get older.

I remember an old comic that had an abuser giving a fluffy a plate of spaghetti with extra-hot sauce, only for it to gobble it with no sign of distress. We then saw a label on the fluffy’s butt reading “for the Mexican market”.

Love that comic. A partial inspiration.

Good way to deal with shitty fluffies.
Maybe next time a smarty can be pillowed and neutered, be forced to watch their herd get cooked alive, then be force fed the results.