Does anyone here know of any game mods that put fluffies into video games like for any of the Fallout games or Skyrim as example? Would anyone who has the ability to make mods be interested in making something like that?

I once modded fluffies into Dwarf Fortress, but the game is already so brutal that the fluffies didn’t really stand out.

I also tried adventuring as a fluffy, thinking that without fighting ability I could at least make a traveling dancie troupe, but being much slower than a human, that didn’t work out well either. As I could only slip through doors whenever humans opened them, I died at night when everyone was asleep and I couldn’t get inside to hide from the bogeymen. 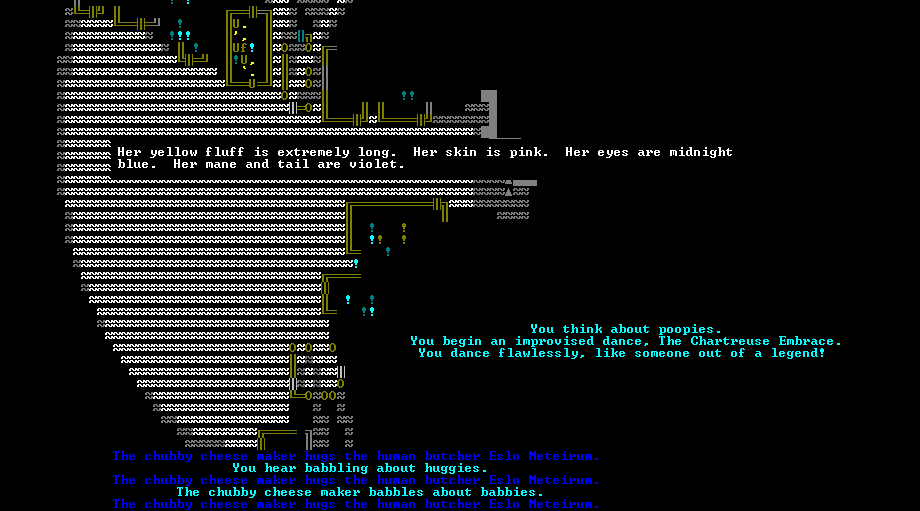 I know someone put them in Minecraft, no idea who though.

I’d like to see some fluffy ROM hacks of retro games.

Fluffies would be right at home in retro games, because, like fluffies, a lot of 8-bit heroes drown extremely easily.

Rimworld would seem like a natural choice for this. I saw that somebody added spaghetti, but not yet any fluffies proper.

Rimworld would seem like a natural choice for this.

“Natural Choice” would be “The Sims 4”. Because it has proper mechanics|possibilities in form of such DLCs like that allows you to adopt & grow pets(and a lot of additional stuff for them, like beds, toys, so on so forth), make a farm & grow plants/animals(like chiks/cow/llamas/sheeps etc.), start your own busyness… So Sims4 fluffy mod should utilize all that possibilities, i think. Like any generic fluffy could be grown as household pet or as farm animal(for food/auxilary products, like milk/fluff/pelts/mulch). Honestly, i have that idea about TS4 fluffy mod for a 4 months allready, & even tried to make it myself, but only result i got - its clear understanding that im very bad at XML-scripting & even wort in 3D-modelling… So, i hope somebody much more profficient in TS4 modding can do it instead of me.

Someone PLEASE mod Ark:Survival Evolved and make a Fluffy skin for the Lystrosaur.
Processing: Lystrosaurus_Dossier.jpg…

i made a fluffy texture pack for minecraft a while back.

but its just textures so who cares.