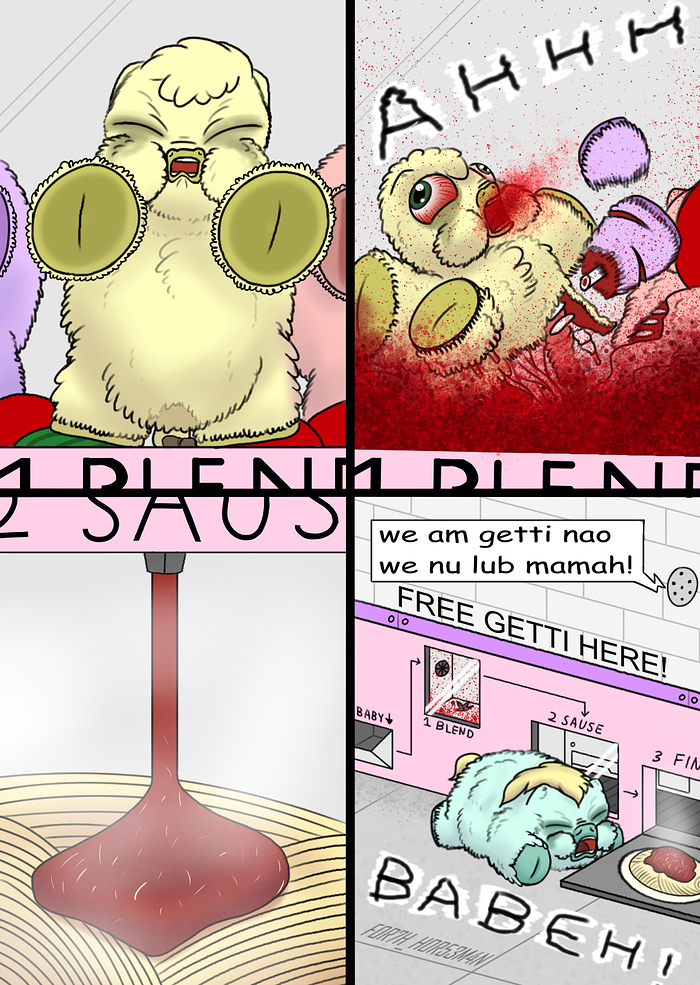 Jack: [It’s creepy how good you are at mimicking fluffy speech]

Boss: [they’re based on me after all, our VC should be similar]

Jack: [yeah… so where have you been this few weeks?]

Boss: [Turns out, the investment we got is less than enough.]

Boss: [if all goes well, mothers should kill off their own babies soon]

Jack: [you need a therapist boss. Putting infertility and silencing drugs in the Spaghetti too? Jesus…]

Boss: [Hey, the fluffies will eventually succumb to their base desire to consume them. And they cannot breed or warn others after eating their own babies]

Boss: [some other fluffy will eat it, either way, one less fluffy to deal with]

*Artist’s note: Feel free to come to me if you have any ideas on what to do with fluffies, be it abuse or hugs, sending me a few bucks will really help me out a lot, why? Because a new semester of university just started and I REALLY need the money to pay for the tuition…

Great work! Although I suppose that fluffies can’t really see what’s going inside or there wouldn’t be any need of muting them so they can’t warn others.

The yellow fluff in the sauce is a nice touch.

Oh I didn’t even notice that, I thought it was cheese.

wonderful just plain wonderful, the speaker at the end and the transparent parts, wonderful, probably sad and desperate to do this and then, yo can nearly taste the agony

We need more of this!

The fluffy speak just went Adios in this comic.

These guys are stupid, but I don’t think they’re knowingly-and-willingly-blend-up-your-children-and-consume-them stupid.

ladies and gentlemen. we have found McGonagall’s successor

Hunger is the best motivation, if they eat their live foals to survive themselves I don’t doubt they would turn them into sketties

Of course. Humans too can be driven to that level of desparation

Great tactic. Most fools who make these machines leave verbal abuse or taunts behind but if you have the voice pretend to be the children the stupid foal will likely believe it or other fluffies will hear it and even steal Foals to put in and get food! Brilliant. This Tactic is expert-approved.

-from your local fluffy expert.