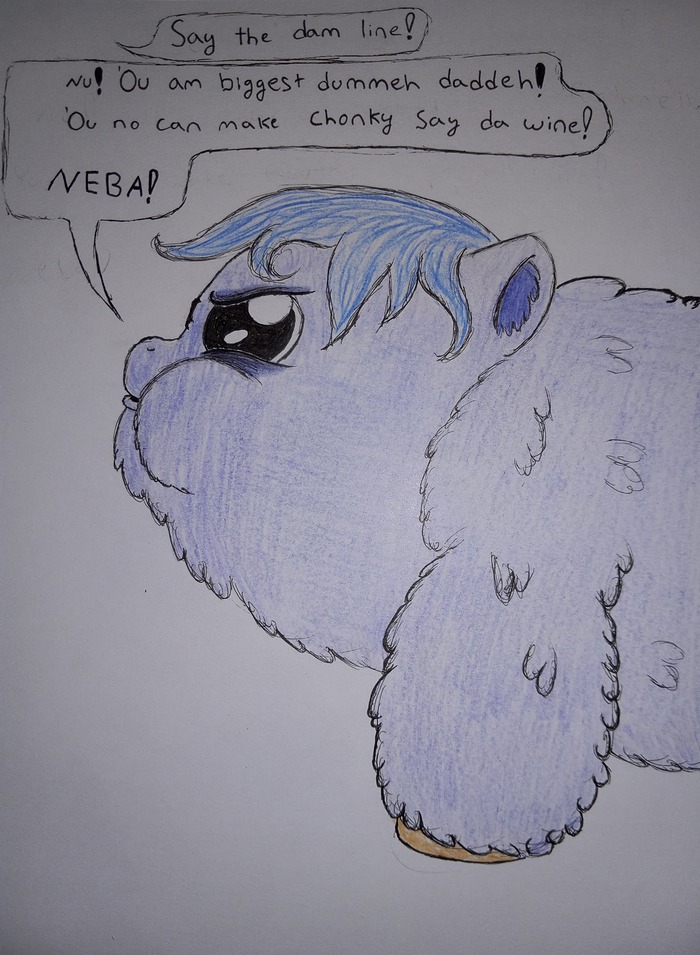 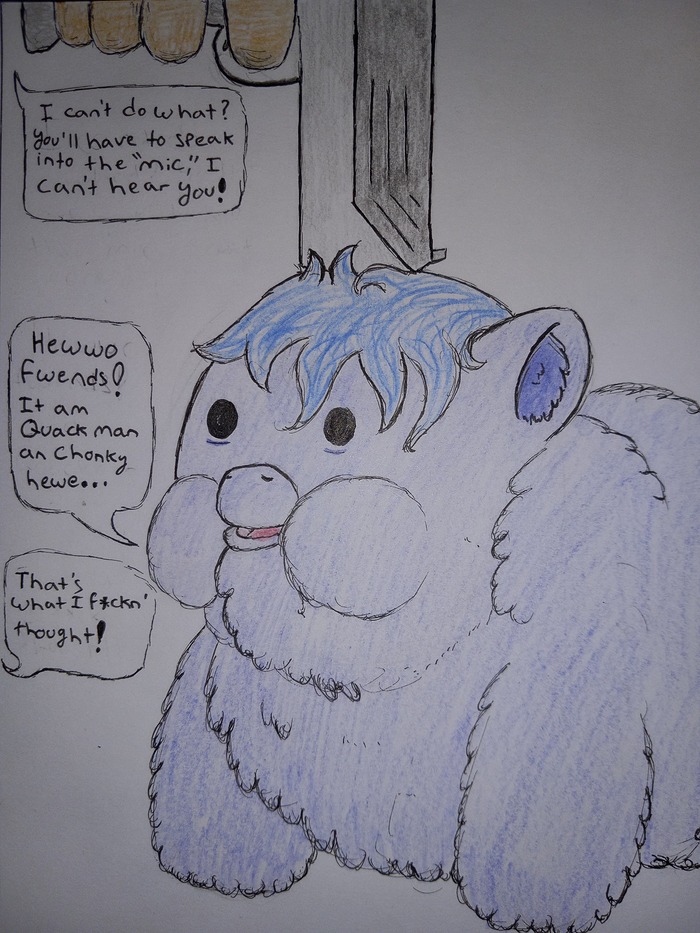 It’s-a me, Quack-Man! I’ve decided that, since I’ve gotten kinda good at drawing, I’d like to hear from you awesome peeps!
What would you like me to draw? Do you have any good ideas? Hug/abuse/weirdbox are all welcome!

I believe there is a tag called what-to-draw.

Also, here is a running list I keep of every weird premise I’ve thought of. Maybe one will give you some inspiration.

Severely injured fluffy pleading with a stray dog to take care of her foal.

A fluffy at the counter of a fast food place with a small pile of coins and coin shaped things they have collected, begging the cashier for food.

A fluffy with a super cut up mouth because she made a nest out of fiberglass insulation so her babies would survive the winter.

A fluffy being force fed condoms full of cocaine, then later being terrified so it shits them out.

A raccoon eating out of a garbage can while a fluffy watches. The fluffy tries to get close, but the raccoon slaps her, and she goes back to where she was and cries.

A sad feral in a live trap that is in a kiddie pool filling with water.

A person petting a fluffy that’s in their lap. The fluffy is hairless, covered in scars, possibly even missing some body parts like an ear, eye, or leg, and with a sad, defeated look on its face. There is a caption that reads something like, “There are no smartie fluffies, just owners who aren’t willing to take the time to train them right”

A pillowed fluffy that has been forgotten outside crying as a bird is pulling its fluff off.

A person catches a feral fluffy looking for food in their kitchen. The fluffy is begging not the be put back outside. Saying it would even prefer “forever sleepies” to being out in the cold.

A happy family scene where some parents have gotten their children a foal. In the background, a full grown fluffy is peaking out of a garbage can and crying.

A gross, sick feral with their back legs (or possibly even their entire hindquarters) crushed standing by the mouth of an alley, offering every passing human a hug, promising to anyone listening that they will be the best “huggie-friend” ever if you take them home.

A fluffy tries to make friends with a police horse. The police officer gets back, and unceremoniously maces the fluffy.

A full sized fluffy is stuffed into a hamster cage. Out of frame, someone insists it is a micro fluffy because that’s what the cashier told him he was buying.

The lotion scene from Silence of the Lambs, but it’s a brown fluffy with a colorful fluffy in the hole telling it “rub da sketty on da fwuff” or something like that.

A person introducing their new foal to their adult fluffy. The fluffy looks at it, then stares angrily at the owner and says something like, “Fwuffy not dead yet!”

An ad for some sort of special toilet seat that allows fluffies to use the bathroom instead of a litter box. The fluffy in the ad is freaking out because it is scared if drowning and has to be physically held onto the seat. (the product doesn’t obviously appear to be dangerous)

A pillowing assembly line, with one fluffy not tied down and trying to run away from the saws on the conveyor belt

Makes me think of those foal eating stories that were a brief trend.

A fluffy un-pillowing line. Something weird but cute. Legs might not be fluffy legs: robot legs, chicken legs, human legs, whatever.

flying micro fluffie’s getting swatted out of the sky, or flying into a bug zapper

your doing real good on your fluffies

A shaved, pillowed smarty covered in sketti sauce about to be devoured by the numerous foals he abused.

medical fluffies trained to sniff out diseases in their owners