The girl at Fluffmart probably hadn’t meant to make Bob feel like a perverted shitheel. Something about the way she looked at him when he quietly asked about “estrus-scented lubricant” was all it took.
“Those sorts of…products…are in the back room. You’ll need to show your ID when you go through the door.”

“What sorts of products?”

She huffed in a disgusted way “I don’t know, I’m not old enough to go in there.”

Bob opened the black door and was immediately met by a more accepting and…shall we say, flamboyant… assistant. After a quick check of his age Bob was allowed into the special stockroom.

“Okay sweetie, and you’re sure you want the Heat Scent Lube with lidocaine? The kind without the numbing agent is half the price, and it makes the experience soooo much more satisfying, no matter who is using the lube!”

“Super! Okay, here you go sweetie, all wrapped up nice and neat so nobody even needs to know. And if you want to use it, there’s even an exit door back here! Unless, there’s something else I can show you? Maybe something silicone, or leather, or …metal?”

“Noooo, I think this is all I need today. Thank you!”

“Okay sweetie, you come back and see me any time, 'kay?”

Crap, no, it really wasn’t all he needed. He’d have to go back out through the front of the store to get the other items…
When Bob came back through the black door, he noticed the young assistant girl talking with another girl of similar age. They both stared at the old man as though he’d been the subject of their latest conversation.

Bob picked up a value pack of stuffed Huggy-Pals (Only five dollars for a dozen!) and carried them to the counter. There on the wall behind the cashier, he saw what he really needed, though.

Bob had left the engine of his car running to keep the air conditioning working.
Gus was laying in the passenger’s seat, humming along with the radio, seemingly oblivious to the words of the song.

It was hard to believe that this happy little bundle tried to stare him down two days prior.

Bob placed all of his purchases, including the little tube wrapped in a black bag, and the very long one in the back seat.

Time to get back to work.

Back at the farm Bob covered Gus with a towel before carrying it back to the barn.
He wasn’t sure which he wanted less questions from: the fluffies, or the Cooter.
Once inside the barn Bob unwrapped Gus and laid him on the workbench.

Gus curiously eyed the very long item Bob had bought.
It looked like the longest sorry-stick Gus had ever seen. It was nearly as tall as missuh fawmuh Bawb, and it had a black funnel on the end.
Gus was afraid to ask what it was for.

When bob came back to the workbench he unwrapped the lube from the special stockroom, and unboxed it. The tube even came with a handy applicator.
He looked into Gus’ eyes and sighed
“Well little buddy, today’s the day we’ve been getting ready for.”
“huh?”
“Today you’re going out with the stallion herd.”
Realization darkly crossed Gus’ face. If it could have hid it’s face, it would have.
“Su, tuday Gus gon’ be dewe enfie bebbeh.”
“Yeah, that’s right. Do you need to make some good poopies before we start?”
Gus nodded, so Bob carried him over to the garbage can, and held the box vertically. Gus had realized that no matter how the box was turned, it always felt like a tight hug.
Gus huffed and voided it’s bowels into the can. Urine dribbled out of the ragged hole where the no-no stick used to be.
With that done Bob took Gus back to the workbench, gently cleaned Gus with a baby wipe, and flipped open the tube of lubricant, squeezing out a bit onto the tip of his finger. When he pressed the lube to Gus’ poopie-place the fluffless fluffy shuddered, trying to smack away Bob’s hand with the little bit of tail it had left.
“Hey, stop it. I’m trying to help you.”
Gus began whimpering.
Bob gave the lidocaine a few moments to take effect as he screwed the applicator onto the lube tube, smearing some of the clear liquid onto the tip, and pressing it to Gus’ poopie-place.
“Okay little buddy. You’re not going to enjoy this, and neither am I, but here we go.”

Gus felt the tip of the applicator push into the poopie-place and gasped. Huwties-wawa welled up in hims see-pwacies, blurring the room around him. But, once the tip was through the passage Gus realized that it wasn’t so bad. Gus couldn’t tell how far it had went inside hims poopie-pwace, but it was getting easier to tolerate by the moment. When Farmer Bob pulled the applicator out Gus gave a little sigh. It sounded as though it was partly relief…and maybe a little pleasure.

The stallion herd was lounging in the mid-day shade beneath the sweet-gum tree.
Many of the boys were bent double, licking at their no-no sticks, wishing that the throbbing in their special wumps would subside. But that dummeh fawmuh took them away from all the pretty mares and fillies, so every one of the boys was aching. Many of them had begun trotting bow-legged to keep from accidentally bumping their special wumps with their weggies.
And now to add insult to injury every one of the stallions and colts could smell a mare in heat. She seemed to be just inside the barn. Their no-no sticks peeked out of their sheathes.

The barn door opened wide and Farmer Bob came ambling out into the sunlight, carrying a box with a handle…and a face?
The man set the box down in the middle of their group and all of the boys stood up and gathered around the new arrival.

Bob started walking back to the barn
“I’ll leave all of you to get reacquainted.”

The boys chattered amongst themselves.
“No smeww wike Gus”
“Smeww wike…wike, pwetty mawe!”
“Yuh-huh.”
An inquisitive fluff pawed and pomfed at the metal enclosure Gus was living in.
Gus didn’t mind.

A dark gray stallion spoke up. “Cwowd fink Gus ib munstah. Gon gib hims sowwy poopies!”
The gray turned around and raised his tail to do just that,
but a sudden streak of color flashed out from the barn and struck Cloud on the flank, splattering against his fur. Many of the boys scattered, stopping a few feet away.
Farmer Bob was holding the funnel of the longest-sorry-stick close to his mouth. He pressed a button on the side of the contraption and another colored ball fell into the tube.

“Boys! Gus is not a litter pal. Don’t you dare try to poop on Gus. I’m watching you.”
The paintball blowgun seemed to be the perfect tool for this job.

Beef Supreme approached Gus again, with his giant bell around his neck, and his speciaw wumps throbbing. He knew two things were true;
Gus smelled like a pretty mare
and there was nothing the fluff could do to stop him.

Beefie put his front hooves on top of the box, and unceremoniously shoved his no-no stick into Gus.
A loud, whimpering squeal shuddered across the pasture as Beefie hurriedly enfed at the boxed fluff.
“Gu-u-u-ud Fee-e-e-ews!” the red stallion muttered as his eyes rolled back into his head and he sprayed no-no juice into the enfie pal.
The other stallions waited only long enough for Beefie to step away before they jostled forward to have their own turn.

After a few moment Gus had stopped squealing. He wasn’t even crying, now.
Gus…actually seemed to be okay with the current situation.

Bob had to shoot a couple more paintballs at impatient colts that thought they would give Gus enfies in the mouth,
But after two hours of constant enfing, the boys were laying in the shade, with many of them asleep, and All of them feeling more content, and acting more docile.

Bob knew he had made the right choice, and that Gus was now one of the most important members of this herd.

As night fell on the farm Bob went out and picked up Gus’ box, turning the fluff to look him in the eyes.
“Hey Gus. You okay?”
“Yuh, Gus ib otay. Dat wun’t so bad.”

The fluff didn’t want to admit that it had begun to enjoy the process, near the end.

“Alright. Let’s go get you cleaned up, and then you can have your sketties.” 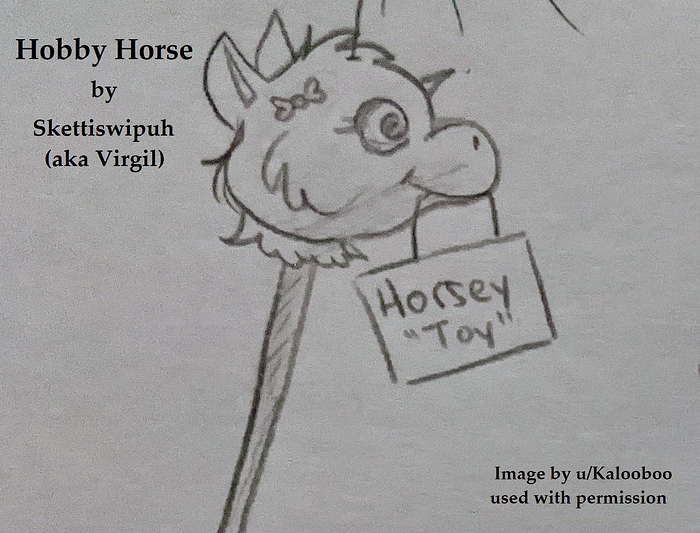 Poor gussy. Could be worse for him, though.

I challenged myself to come up with a way to have a happy enfie pal in a story.
Gus was the result.
Little did I know he would become one of my favorite characters.

I think this is about as far as I managed to read on the booru, are the next chapters in progress or did I just not find them last time?

And it came out surprisingly well. He seems to have it better than other fluffies, even

There’s a bit more that is written, and the rest is still in my head.

I don’t care what gus did. I love him now because of how much better he is

Can’t wait for for the next chapter.

Let’s say that he has a pretty optimistic outlook on life taking into account he’s been pillowed. Also, I’m very confused by the chapter numbering and I think I may have missed something but I’m completely hooked up on this.

I honestly confused myself while I was writing it, going back and adding chapters in between others. At one point I even lost a chapter entirely and had to recover it from the archives.
At some point I’ll have to fix that.

Never thought I would think it but the little bastard has grown on me.

Better than he deserves though. He was a Foal raping, sorry pooping, disobedient Toughie. He got treated far better than his behavior warranted.

Yeah, that’s a theme I’m trying to keep going, in my stories

At the very least he has a purpose/use now. Not saying he doesn’t deserve it after all the shit he’s pulled but I enjoy the scenes of humanity(?) between him and Farmer Ben. Puts a bit more complexity into that little bastard’s life then he could of ever had.

Oh certainly the scenes are very good. I did not mean that the story should be altered. I was pointing out that Ol’ Bob is actually treating these Fluffs better than they deserve in most cases, and I suppose I should add that Ol’ Bob also seems to be developing as a character, and is learning to treat the Fluffs that DO deserve respect (Like the Feral family) with the care a person should, which is rarely seen in the Fluffy-Verse. O.o

Ah I never meant it is as changing the story either but more so that he enables Bob to change and expand himself. Whether it ends up as a good thing for Gus is besides the point but that he is a going to be a key player.

But we can agree that Beef is probably a bigger asshole.

Well, um, no, Gus will have the much larger hole by now O.O

How’d I not find this yet? This shit has some character growth.