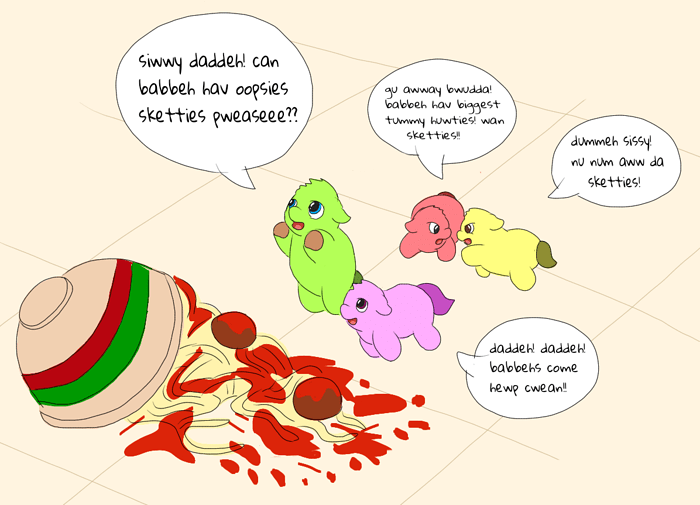 One of Carpdime’s older images. The green foal is not Avocado, but was a recurrent character in a lot of Carpdime’s early hugbox/neutralbox art about foals.

This image was used as the illustration for the Interluder piece of the Avocado series.

Wow. Those are crazy disciplined fluffies.

I think people get too carried away with depicting fluffies as unruly. I prefer the SOL settings, as well as the more grounded stories that explores fluffies may change a society in a believable way, especially one that doesn’t over-emphasize their negatives.

misinterpreted SOL as shit outta luck, not slice of life. makes much more sense as the latter

I notice Carpdime gets referenced as an in-universe breed the most, including by me.
I wonder how many folks are doing so because they genuinely feel the artstyle is how they want the audience to picture their Fluffies, or as a narrative shorthand to say “this character will be in the same vein as Avo in terms of being a smart sweetie”.

Your foals are so cute

But no spaghetti for them! - I’m a meanie

the red and yellow ones can watch the other two good fluffies eat oopsies sketties from the sorrybox. name calling and sorry hofsies not allowed. if you can’t use your hoofsies for good I’m going to have to take them away!!!

I’d probably quickly scoop up those meatballs and make a new batch of spaghetti. 5 second rule and all.

Tbh at my house I’d eat that oopsie sketties. But not if the bowl is glass

If they wasn’t he had to punish them.

Ehh the yellow one is telling the other to share, I think he’s more defending hinself

Maybe. still looks like quarreling to me. SORRYBOX FOR ALL. (can you tell i grew up in the bullshit 0-tolerance schools.)

I do that kind of thing. My stories focus a lot on the relationship between humans and fluffies, the fact that the point of no return has been crossed, that the two species’ destinies are inextricably intertwined, and what happens when there are entities who see humans the same way abusers see fluffies.

Really, if you’re the kind of person who denies fluffies mercy because they’re weaker than you and they can’t stop you, then you can’t complain when someone stronger than you denies you mercy because you can’t stop them. If you think it’s okay for humans to treat fluffies like vermin, then why is it not okay for, say, vampires to treat humans like walking Happy Meals? If you want mercy, you need to show mercy. If you don’t, then you don’t deserve mercy. That’s a major theme of my works.

There are also parties actively working to help fluffies become their best selves, because it will help humanity in the long run too. They want both species to thrive together. And this works, because fluffies have the same capacity for evolution that the many species comprising their genome have. Even if Hasbio limited that capacity, it doesn’t mean the limits can’t be undone.

But it’s a slow process. Someone tried just engineering a fluffy with supergenius intellect but… it didn’t end well. So, instead they’ll take it one step at a time.

The green one and the pink one have the skitties, execpt the red one and the yellow they look like smarty