The sun started to rise on the horizon of the peaceful blue and green ocean. The water glistened with a layer of boat oil, and the air was hot and still. The hot, cigarette butts, and crushed aluminum can filled sands of Ocean City New Jersey were alive with locals and a few tourists.

On a large ‘California Raisins’ blanket a portly man named Carl sat and enjoyed the sun. He was rather pale, but his body hair shielded his skin well from the sun. Carl had a fairly impressive sweater made of manly curly hairs. He smelled like a mixture of fast-food, cigarettes, and light beer. Around his neck was a gold chain, and he sported his pair of beach sweat-shorts, which he made himself by cutting a pair of sweat-pants. His feet were protected from the hot sands by a pair of green rubber flip-flops. In an uncharacteristic display of athleticism, he got up to walk along the beach. He takes a deep breath of the funnel-cake, pollution, and ocean smelling air. He walks along the shoreline, notices some attractive women in their twenties and smiles, “Hey!!! Ahhh!! You two hot broads wanna get some wings with me or somfin? Yeah?”. The women look horrified and shield their faces as they turn to walk in the opposite direction. Carl thinks to himself, ‘They was probably thinkin Im too manly for em!’. Carl continues to strut down the beach enjoying watching the people and the nature around him. A flock of seagulls gather in front of him, around something. Carl approaches the gathering of birds with a confused look, “Hey birds there somethin there or somfin?” He approaches slowly, and finds a green seafluffy with white foam as a secondary color on its flippers.

Carl squints at the struggling creature. Around its neck is a plastic 6-ring beer can holder, and it struggles to breath. Carl has never had a pet, and at first he wonders if he can eat the seafluffy. The idea of a pet appeals to him in some way, at least he could talk to something at home. This could be pretty cool, he thought. Picking up the seafluffy, he dusts it off, and gently takes the plastic ring off the fluffy’s neck.

He frees the struggling fluffy which starts to chatter at him, “Fwuffy wuv ou fank ou nice mistah fo sabe fwuffy”. Carl squints at the chattering thing, that he perceives as a talking green seal. Carl looks at the creature, confused, “You…aaaa…some sort of talking seal horse or somethin? You’re my pet now I guess, I’ll name you Poseidon! Yeah!!! Poseidon!!!” Carl starts to do this awkward dance with the seafluffy in hand letting his belly and chest jiggle, as beach goers try not to watch him. He happily walks off the beach while badly singing Whitesnake’s, ‘Love ain’t no stranger’, loudly.

Carl squeezes into his Mazda Miata, which he also labors to get out of. Most of the time he keeps the top down to make entering and exiting the car more manageable. He puts the seafluffy down on the passenger seat as it starts chattering, “Fwuffy ne wawa fo swim an pway”. Carl looks over at the seafluffy, “You aaa need water you say? Yeah ok, I can give you water”. Carl thinks about something he can put the fluffy in with water, that he has at his apartment. An idea hits him, and he wears a satisfied grin driving home.

Carl and Poseidon enter his one bedroom bachelor pad. In the corner is a cardboard cutout bikini beer advertisement, a decent sized television on milk crates, and a mattress on the floor in the bedroom. In the kitchen are scattered fast-food bags and wrappers of various kinds all over the counters. Carl rummages around until he finds a large 7-11 plastic big-gulp cup with some left-over mountain dew. He doesn’t bother to rinse it, he just adds some tap water to the cup and walks into his living room area cup in hand. He places Poseidon into the mountain dew water and the fluffy snugly fills the bottom of the cup where it is narrower. The fluffy can barely move, and carl nods, “There its a regular seaworld in here now”. Poseidon looks disturbed that this is his new tank to live, “Posaidon ne moar rwoom to pway an swimmies”. Carl looks annoyed at the idea of having to do more for Poseidon. The fluffy chatters on about needing more space, salt water, food, and entertainment to Carl, who is asleep on the couch after 15 light beers.

You’re Poseidon, you cannot touch your back flippers or bend over in the plastic cup. It is large enough to simply turn inside of but any other movement is impossible. You have barely enough water to stay hydrated as a seafluff, and you are very hungry, but have no food. You spend days without food and are forced to num your own poopies, because you are so hungry. Why hasn’t Daddy given you any good food? Or enough room to swim and play? Are you a bad baby? These thoughts parade through your mind as you think about food, and the need to move, but you cannot. Minutes seem like hours, and hours like days. How long have you been in his tiny cup of dirty water? You have no idea.

The next day at 2:45pm, Carl wakes up to find the fluffy had knocked its cup-aquarium over during the night, and lay on his carpeted floor drying out, and wheezing. Carl discovers the spill, and picks up the cup, fills it with more tap-water, and places Poseidon into a cardboard drink holder from Taco-Bell. The fluffy survives living in the plastic cup for 3 months, until Carl stumbles on a 5 gallon fish-tank by his neighbor’s trash. The side of the tank has a crack in it, which Carl seals with gorilla glue. The fluffy enjoys the extra space, but it is still very small for a fluffy that size, which should have a 50 gallon tank minimum.

The small fish-tank is usually full of seafluffy shit, and whatever Carl thinks it should be fed. Sometimes that’s left over fast-food thrown into the dirty tank, sometimes Carl is too drunk to think and gives it some cigarette butts to eat like, “Your natural habitat da beach!”. Carl fancies himself a fluffy expert at this point, and offers to teach others in the art of seafluffy care. Seafluffies are amazingly resilient and will not die from caregiver mistakes, even large mistakes, like Carl makes on a weekly basis. Poseidon’s water, as usual was full of cigarette butts, seafluffy shit, and a half bag of cheetos, which Carl fed it that week. The fluffy lived in these conditions for 5 years, malnourished, plagued with infections from the dirty water, and usually sick in general.

Poseidon was close to the wan die loop but not quiet there. Poseidon usually didn’t try to talk to daddy because it would result in something like cigarette ashes being added to its water, or Carl just doing something like peeing in the fish tank because “its all water, none of this matters”. Poseidon didn’t see any light at the end of the tunnel. He was to live seemingly forever in this tiny fishtank, which he was too big to turn around inside of.

Poseidon has gone days without food, and Carl spends most of his time drunk on the couch watching TV. Poseidon sticks his head out of the dirty fish tank, “Posaidon wan some nummies, tummeh have worstest hurties”. Carl wakes up for a few seconds and blinks at Poseidon, before getting up, and dumping a nearly full light beer into the aquarium. Poseidon, filters the alcohol though its seafluff gills and quickly becomes intoxicated. A couple of hours later, Poseidon is floating unconscious from the alcohol in the dirty fish tank, which smells more like a rancid toilet. Carl notices Poseidon floating, assumes he’s dead, and looks annoyed at the chore ahead of disposing of it. Carl, not wanting it to smell worse in his place, hauls the fish-tank, fluffy and all to the curb. Carl believed Poseidon was dead, but really he was just unconscious. The seafluffy lay in its aquarium barely alive, twitching, on the curb, with a pile of trash.

Who wants to adopt Poseidon from the curb in his dirty fish tank? 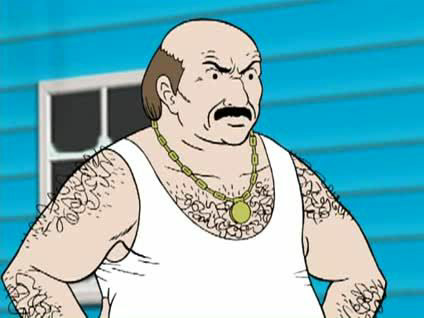 I don’t want to adopt him, I want him to go live with Carl some more.

at least he could talk to something at home

Other than his McDonald Meal

It don’t matta…None of this mattas… lol