Smarty gets a new home (part 2) the choice! (drawn by Man-Bat-Person-thing) 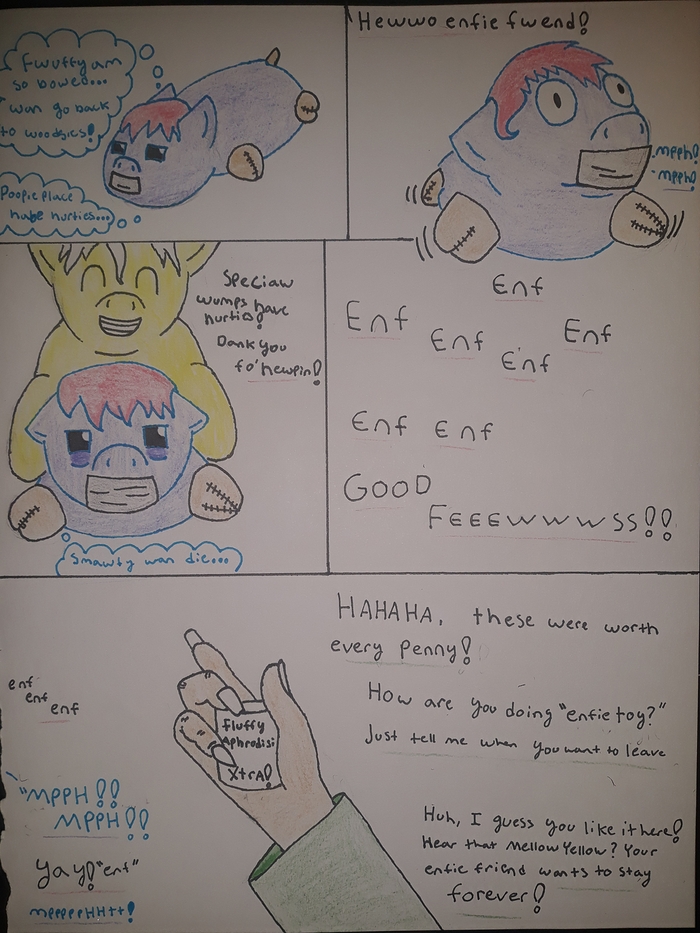 Did he really have a choice?

Quick question: isn’t any stallion who would willing use an Enfie Fwiend a smarty? A regular fluff would see it as a special friend even if babbehs aren’t possible (a stallion can be easily fooled into thinking another stallion is a mare, and fluffies don’t understand fertility so they’d never catch on why the special friend isn’t getting pregnant), cuz enfie friend/pal pretty much means “rape buddy” in fluffy vocab.

Face in the second panel, though. So good!!

That would be true, except that mellow yellows owner convinced him that his new “enfie friend” wanted to be an enfie friend and help mellow deal with his special lump hurties (thanks to the aphrodisiac.)

She told him that he wasn’t forcing special huggies, as if he was the smarty would tell him so.

(Note how smarties lips are ducktaped)

K. Lying to a fluff (and throwing in boner juice for good measure). That makes mellow yellow a good fluff I can root for and not a hypocrite rapist. I was afraid we were trading one smarty foal-rapist with another smarty regular rapist. But knowing the mummah is manipulating Mellow Yellow makes this soooooo satisfying.

The smile drawn on the tape;)

Hope Mellow Yellow gets a lot of mileage out of this one before it stops breathing.

Well, he had a choice

He could’ve chosen to not ask that woman to enter in her house. But here we are, as a yellow stallion’s enfie pal