Such A Little Jinx part 17 by bunnybunnyhops 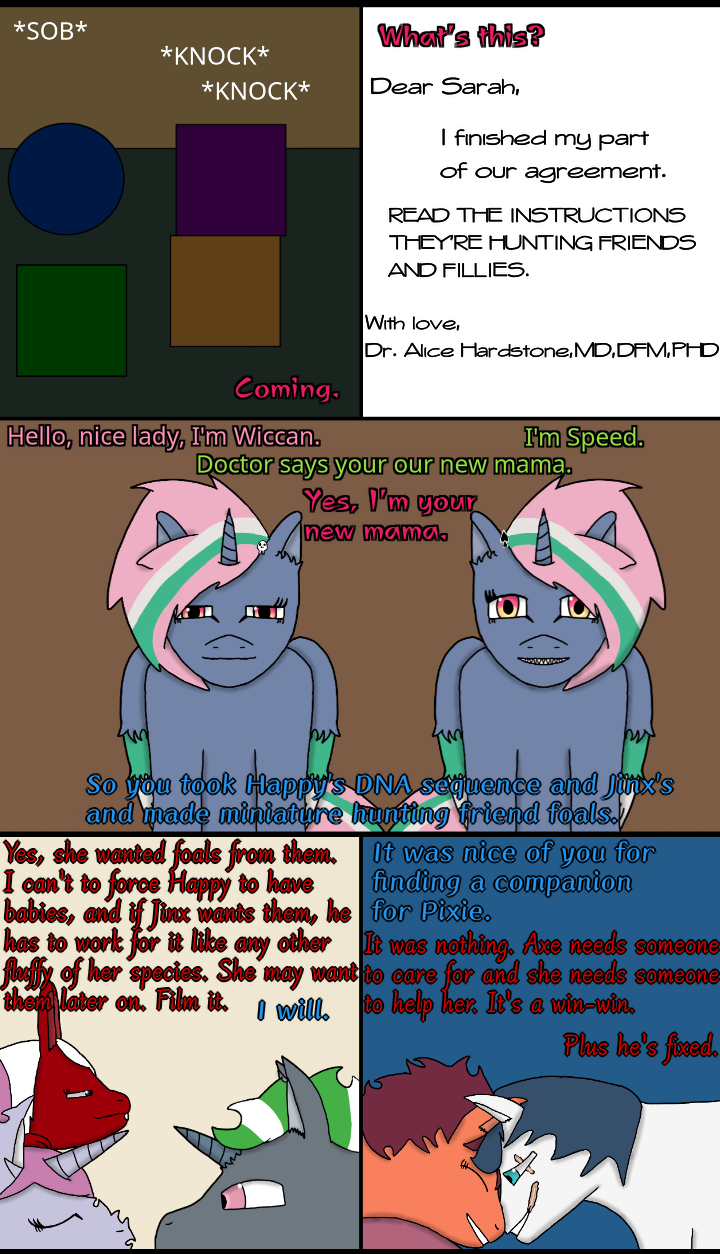 Skull and spade, gotta remember that

Can you tell me more about hunting friends?

Hunting Friends are lab made cannibal fluffies. They are smarter, stronger, faster, more agile than a normal fluffy. Their horns are longer and they can fly. They generally have cat eyes. Sometimes they are mute. They will turn on a person if the person hurts them on purpose.

If they can talk, they can talk like people. They can eat any meat based food. Dog food, cat food, mice, fishsticks. They mate for life. When choosing a mate, they have to impress their desired mate, this is usually a fresh kill. They usually breed with another hunting friend, but they can breed with any other type of fluffy. They foals are usually hunting friends, except with cannibals, the foal s will always be hunting friends. They only have one or two foals. Like horses they can self abort unwanted foals. Females are the leaders in herds. They fight for dominance.

Happy isn’t normal in Hunting friend strandeds. Her eyes can switch from hunting mode to normal mode. Because of her dwarfism, she is considered a Defect and would have been destroyed if no one feared Alice.

How do they differ from the swirly-eyed variety of cannibals? Are those not lab-made?

They are similar, but different. Cannibals are born with a mutation that makes them cannibal, but other than the spiral eyes and sharp teeth, their like any other fluffy. I know AtlanticHillfolk has a cross between the two and call them cannibals, but they are the exception, not the general cannon.

Bunnybunnyhops is right on the money there! My ‘cannibals’ are normal fluffies who are surgically made into cannibals via lobotomy and the mutated into something akin to hunting friends, like hybrids of a sort.

But the standard lore on hunting friends is usually that they have to be made in a lab, from scratch, like designer fluffies!