The Specialist # 17 [by: FallenAngel] 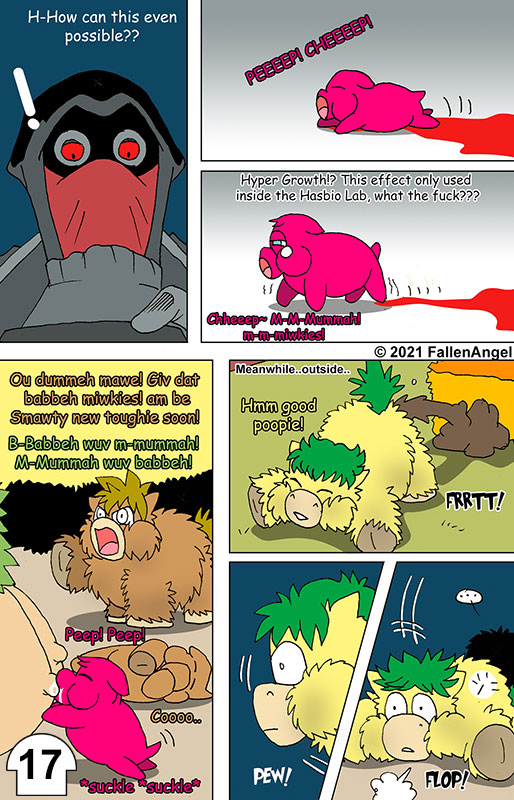 Wow, hyper growth sounds cool, but doesn’t that mean the fluffies will get old much faster

Not in an instant but like rather week it might msture by 3 days, this is why this herd seems like a lot, they chose foals to be his toughies , food gatherer and kidnappers and the rest are food or enfie.

In my lore this method is for Habio research on fluffy seeing its condition when at its peek age.

I feel that the hyper growth may be caused by a mutation of immortal jellyfish DNA. Immortal jellyfish can turn into children when stressed or in danger. But the fluffies are doing it backwards

but the mystery is why its out and that smarty can use it. Its suppose to be a lab used instrument and worst…since the owner of the design left it was suppose to be not on use anymore, someone’s gonna be pissed soon

It would also mean their metabolism is much higher. That would explain the cannibalism.

The tranq dart isn’t so easy to read. Probably could do with more line rendering.

But I love the poop-shock-paralyzed sequence of panels. Super smooth!

Goddamn, that fluffy’s poopin’ like when a pipe is getting mud cleared out.

So that’s why they take other fluffies (well mostly mares), they kill the ones who didn’t inherit their jacked-up genes. My money’s still on these fucks being a military experiment or Habio or a third party traying to fix fluffies.

Hey, fallenagel. What’s your cannon. Does Hasbio still exist in your cannon?

Wait does that mean that was one of the things Cassandra created when she was working on fluffies?

They are, it has the same prob but with few changes. Few key scientists who work on the first gen left in disgust due to the rush and low security on the lab , the raid by the activists and the constant bickering of the executives.

The main key executive left but leave it to his right hand act as the head. But he constantly observe them in the shadows

But the idiots who ransack the lab of the first gen fluffies where found dead in their organization with insects coming out of their bodies.

Bingo! Yes but its not intend to be like this, someone perverted that creation so this is part mystery and slight espionage but on the side only.

She and few key scientists left the conpany in disgust after the raid and worst her researched been stolen and she personally track them down one by one.

Oh, okay. Interesting. Was it the mistress of the garden’s doing, the deaths of the PETA idiots that is? Interesting cannon Hasbio still around, but they are greatly weakened, unlike most other cannons where there still around but not nearly that affected by the Lab breach incident or were racked over the coals and forced to shut down in some others. Did I get that right?

In my version, hasbio still the top dog but few secrecy that even the top executive didn’t know ( the reason he left the board and into the shadows to investigate ) and other greedy executives cant forced him out cause he holds the biggest stocks and share and he slowly uprootin those involve in backdoor deals.

The fluffy eradication unit is just a shitty way to take money by the board.

And yes never mess with a girl who have mysterious ways of brewing genetics. Cassandra always have a rune mark in her every work for precautions such as that incident.

A leak perhaps? A failed attempt from one of Hasbio’s rivals to steal their corporate secrets that caused feral fluffies to come into contact with hyper growth?

Could be whoever did they are in for a very , very, rude awakening from its raging owner.