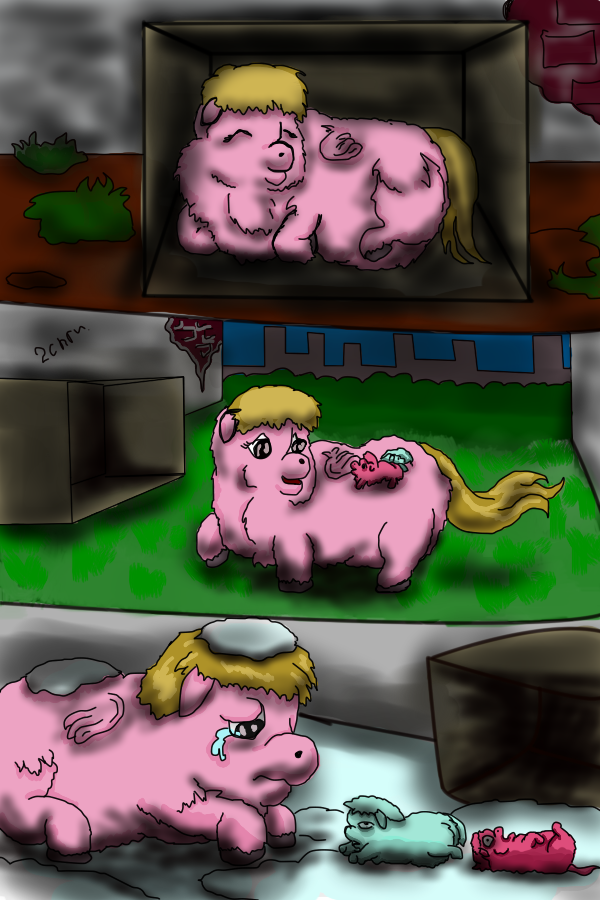 This comic approved by House Stark.

If I could have taken her in, they all would have been warm and fed for the rest of their lives*.

[* If you know me then you know how this ends.]

Nothing to do now but eat the babies.

WOW, to write this story you must have a COLD heart… just like the foals.

PS: I don’t believe the author is cold-hearted, but the foals I’m certain.

Fatten em up and ready to be cleaned , skinned and chop.

As an expert in fluffy food @FluffiesAreFood is there a way to calm fluffies ready for slaughter?

I know smarties and dumbass is worth them screamin while been boiled, skinned and chopped up. But for those simple who can like accept calmly and willingly to be human consumsion.

I keep wondering how many times she’s gone through this exact same thing.

So, in my headcanon the best way is to keep them convinced that their heading to the chopping block is a good thing. So in my fluffyverse, fluffherders convince their meat fluffies that Skettiland is a real place where all good fluffies eventually go, and that going there requires playing the Knifey Game. They are not told what the Knifey Game entails, they are only told that only the bestest fluffies get to play the Knifey Game. Then at harvest time, they inform the fluffy that they are going to Skettiland. The fluffy is given a special bow or cap to wear in celebration. After all the cheers and goodbyes and lastest huggies, the fluffy is wheeled to the butcher room where they are secured in a legboard or skinning harness. They are told to close their eyes, count to three, and then they would be on their way to skettiland. On the count of two, their throat is cut, severing the exterior blood vessels and the trachea below the wind pipe. By the time the fluffy realizes what has happened, they are very much in the process of dying.

It sounds convoluted, but fluffherders in my fluffyverse have this down to a science. It can be, and has been, industrialized. One billion fluffies a week die believing that they are going to Skettiland.

To be fair that’s one of the least abusive methods I’ve seen based on comics I’ve looked at. Quick death and lots of happiness before. Sounds quite thoughtful.

Given they can have many litters a year? Probably a few. I bet summer is it’s own kind of awful as well.

And in the harvesting process: that’s work. When I lived in Georgia my friend who hunted deer told me that a “bad kill” would cause adrenaline to go through the body and negatively impact the female of the meat.

Likewise here? I’ve got friends that swear by locally pigs (raised or feral) that have the chance to eat a lot of fruit like lilikoi, guava, etc, because the meat is supposedly sweeter.

And get any foodie to talk about grass fed beef!

Honestly, while a lot of the abuser focused “fluffies as food” bits might be cathartic for some, to me it looks like it wouldn’t take good because of how they die, how badly some live, etc.

I think having lavender to soothe them would be good. I keep thinking that and CO2 might be an easy way to do it en masse. Or gradually lowering the temperature to something very sleepy-making then flash freezing like the way Japanese do tuna. Especially if it’s going to stores later.

Well, if you’re considering gas one tip is that nitrogen works better. CO2 the body registers as dangerous and triggers a suffocation response. Nitrogen, on the other hand is more than 75% of air and the body ignores it. So it can be used to asphyxiate without the body noticing. Less painful.

That’d be it then.

Thank you this gives me a good idea what to do on a future fluffy butcher story.

I’m really glad to hear this!

If it helps: in my fluffyverse, about 300 million fluffies a week die at the hands of smallholder fluffherders with personally owned herds of about a dozen fluffies. One-third of those herds are in Mexico, the rest are in what used to be the United States. The other 700 million or so die in industrial operations where the “trips to skettiland” are like theme park rides intended to maximize joy just before the fatal blow.