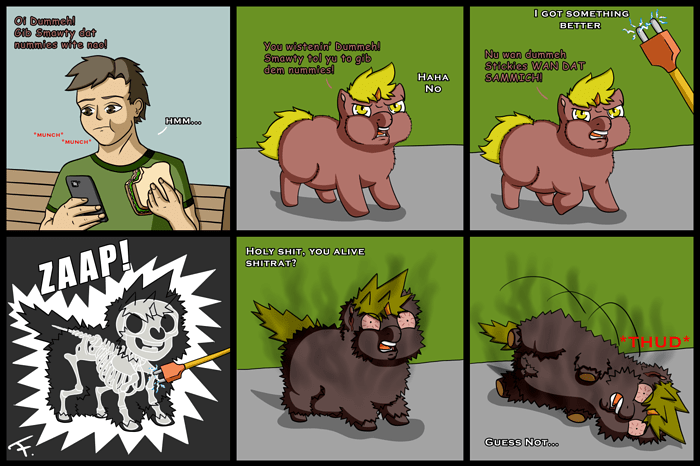 He’s got a weapon in pubic that isn’t a gun! Shoot him!

I wonder how much of a shock that rod would have? Not like you would need that much to kill/incapcitate a fluffy.

Complicated answer. Scientific one. Which is why the law is iffy on the subject, and generally decided based on precedents (like the police are always right) by ignorant judges.

Most of the energy of electric weapons discharged does not enter the target. This is because voltage is the energy provided, but amps are low due to inefficient delivery. Using water as a metaphor, amp is pressure but volt is volume. High amp low volt will kill, low amp high volt may kill you or do nothing at all.

Most of these devices do not actually tell you the amps because in addition to the device itself, conditions factor as well. Being wet boosts amp, your diet, the temperature and humidity, the elevation, and so on can effect amp in important ways.

The average taser releases 300,000 volts but only around 50,000 enter the target, mostly localized where it hit which is why its murder to tase someone in the chest but torture to get them in the sides or back.

We have Hivecanon. Fluffies are small, and electricity does effect small things much more than big things regardless of voltage. But Fluffy fluff is very flammable, meaning its a good conductor of energy, while Fluffy flesh is less so. That’s how they can cause a lot of damage quickly unless an abuser is keeping them contained, they’ll create a raging inferno as they run around and spread it everywhere.

Fluffy fluff is soft, so its produced close to the skin and not likely to provide an efficient channel for current to penetrate muscle.

So a Fluffy will almost certainly fare better than any animal of comparable size.

So in order to produce that effect, full body paralysis via locked muscles after a moment of contact, that man is carrying a VERY deadly and illegal weapon around.

That said, Fluffy biology works on plot mostly. In this case you could argue that because the beat between death and falling serves as the joke then comedy physics is at play, so it may merely be enough to cause a bit of static cling.

But in the interest of an actual scientific answer and not “LOLIDUNNO, FLUFFY GO SCREEEE” the man’s weapon could probably kill an elephant and its only a matter of time until his actions kill something else too.