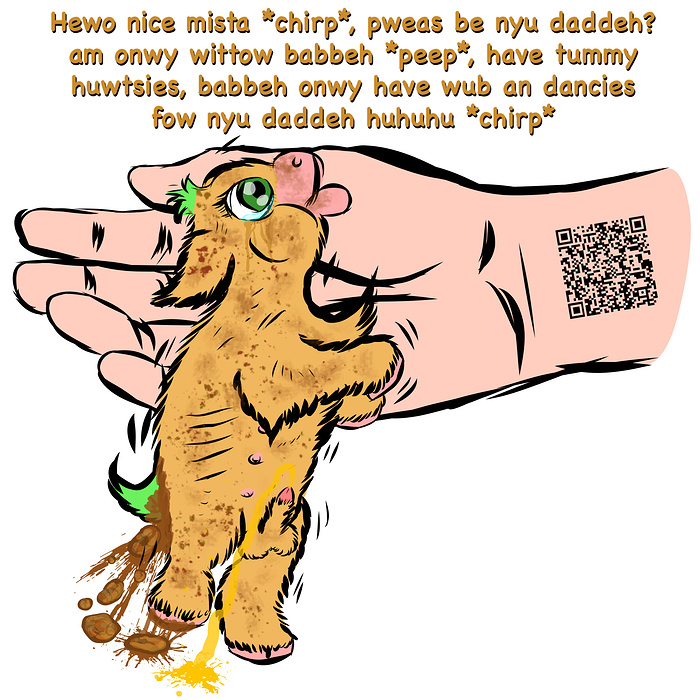 And so, the Dancie Babbeh was adopted and was very happy for ever after… Or was he?.

There was some comedian saying he never felt love like he did when his dog/pupply peed a little because it was so happy to see him. He said none of his friends did that!

At this point I am neither impressed nor grossed out. I’d want to see more. Granted, that’s more an aesthetics thing. Let’s see how the personality is!

Or you take care of it too much and accidentally pop it.

I know a QR code shouldn’t make me think this specifically, but I wonder if the person with the tattoo is like a Hasbio researcher or something. And that fluffy is just in for invasive testing. 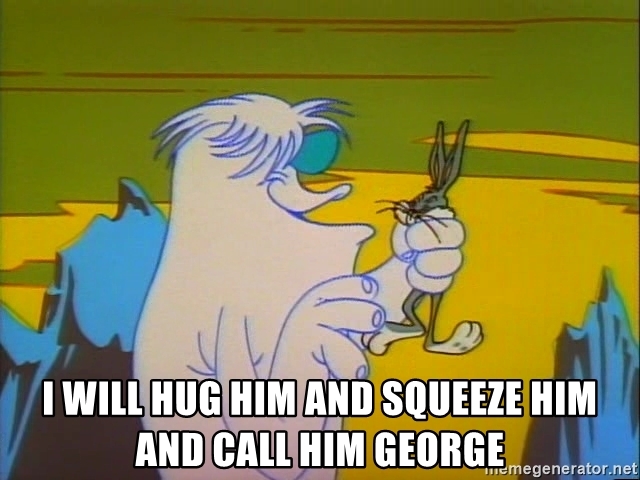 I just want to snap one of his legs and make him a crying baby.

Why is the QR Code on the human? Are they some clone?

GI Joe and My Little Pony were both Hasbro properties. Usually advertised together until Transformers proved to be the stronger brand and GI Joe was shifted into the secondary role in advertising. Then overwhelmingly so when it was determined that Transformers had genderless appeal compared to the two gender-centric IPs.

Which means its fate depends on which side is picking him up, and how over the top masculine they made it. Fluffies are more gender neutral, so Joe biotoys may be as well.

Also, I would like to take the opportunity to remind eveyone:

Can someone scan the qr code?

I did^^ And actually, I dont wanna spoiler it, but it leads you to other posts, which is a fun idea

“Where I can lick my wounds and plan”

~cut to scene of a unicorn licking Megatron

A missed opportunity to rickroll someone in my opinion

I take it as canon in at least one crossover universe that Megatron comes to Earth just to be with Fluffies.

Fluffsplosion had one where it appears that either Megatron became a Fluffy or taught a Fluffy to transform. Its tagged Transformers, and the logos of the Autobots, Decepticons, and Cobra (who has two Cybertronian permanent members) appear.

Now given BeastWars happens because Megatron II follows the instructions of Megatron, and Mach Kick the horse Transformer is born as a result, who appears in the current comic crossover despite otherwise having been a 100% forgotten character, Megs’s obsession with equines has transcended space/time.

First you feed it until it vomits, next cauterize it’s asshole, them keep the flame under its stomach as it’s food and stomach acids heat into a gas and finally, watch it pop. If it survives, find a litter of kittens and offer it as sustenance and watch it being devoured as it begs for huggies.

@Deliverance If I may offer a little criticism - for a hugbox piece, I think there shouldn’t be too much emphasis on urine and fecal matter. Admittedly, it does depend on how one sees fluffies, but I think hugbox pieces should see fluffies as more than just their negative traits.

As much as I would agree I think it’s really keeping to his style, no? The world he’s established is full of shit, piss, and a grounded sense of grossness. It’s his interpretation of a hugbox situation.