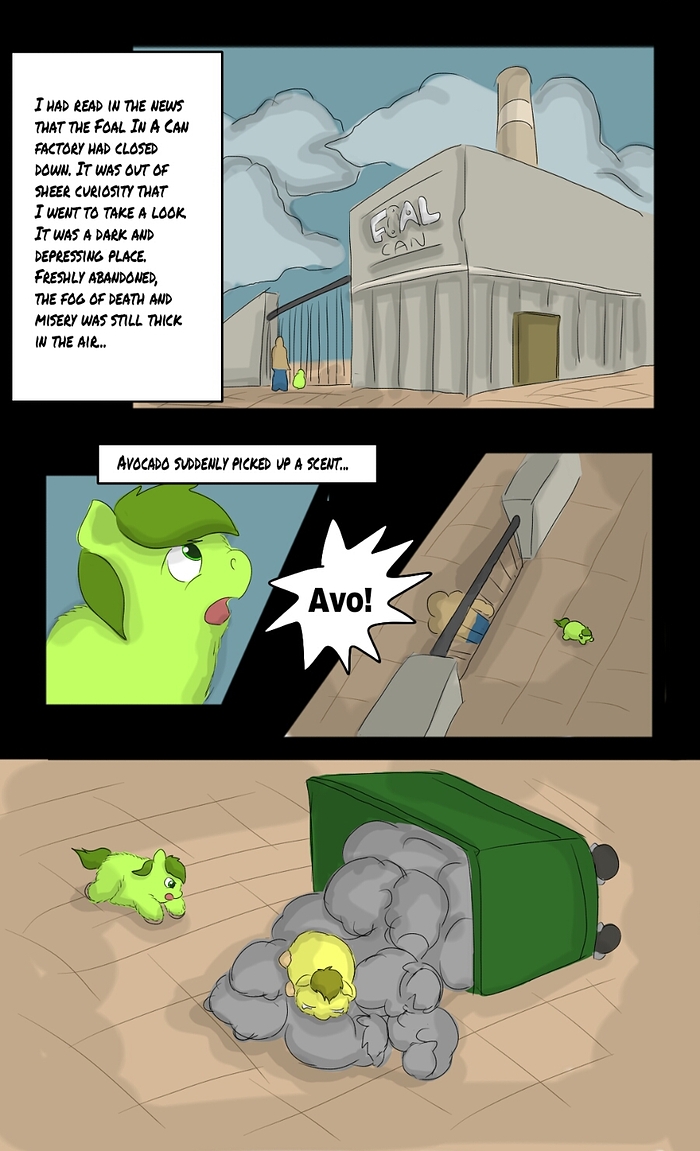 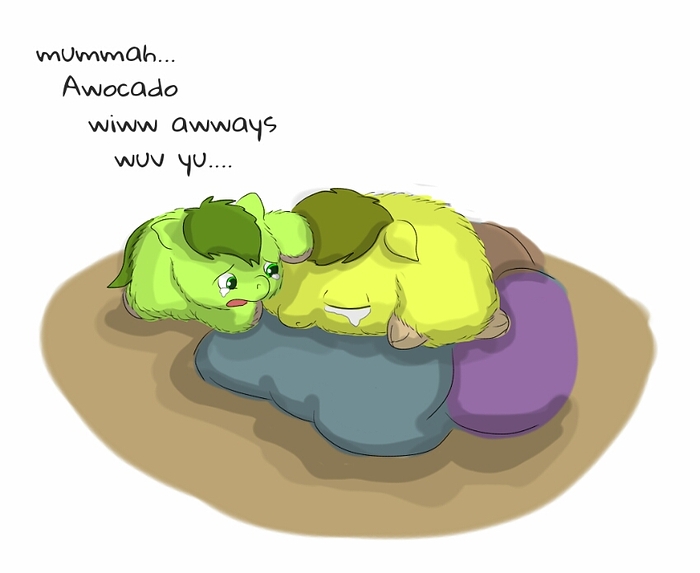 A fluffy never forgets the scent of its mother.

Continued from the Fall of FoalCan Inc and Cleaning up the Factory. . At the time, this was the most significant development of Avocado’s character, as he came to meet his dying unnamed mother, who had been discarded from the factory.

It’ll be a while before I get to this part of the story, but uploading it for the sake of the upcoming Avocadoverse index.

How could he possibly identify her as his mother anyhow?

It’d be pretty funny if this was just a random dam that he assumed was his mother because of lack of evidence to the contrary.

Smell is a powerful sense. If Avocado caught a whiff of his mother before being shipped off to be a foal-in-a-can, her scent can trigger an emotion on maternal identifier. It’s a bit of a stretch for a theory, but carpdime’s fluffs have shown to be far more intelligent than we give fluffies credit for. So a smell making him feel safe and secure, even not have SEEN his mother, could (theoretically) give him the right indication of that being his birth mother.

How could he possibly identify her as his mother anyhow?

It was a headcanon that Carpdime specified in the page of the following picture. I know because I read it on the page at the time, even though no archive of the page remains currently. The idea was that, because Avocado was in her womb, he would retain a base memory of the smell. Its as @Fluffocalypse mentioned.

Keep in mind though, this was Carpdime’s headcanon at that time. I’ll have to check if he maintains it.

It’d be pretty funny if this was just a random dam that he assumed was his mother because of lack of evidence to the contrary.

I actually also like this approach. I like it because, it could be possible that it wasn’t his mother. However Avo’s mother did hail from an origin like this. And based off the design, the mare that Avo saw resembled him (note the mane). I like to think that, just as Avo expressed sympathy and empathy for alleyway fluff, he could feel an empathy for the breeder mare and think of her as being his mother, much like the others in the pile. Mind you, this is my own interpretation and not the canon, but I feel that it would reflect Avo’s own empathy for the less-fortunate, which is why I find him admirable.

REMEMBER THE SCENT OF MOTHER

It’d be interesting if she was actually an older sister or an aunt. In the end I’m not sure who she was is as important as the character development.

If @Carpdime’s okay with it, I’d love to give Avocado a cameo in one of my stories. I’d just need to work out a good place for him.

Probably not the School. Gotta have some normo fluffies in my headcanon.

The idea was that, because Avocado was in her womb, he would retain a base memory of the smell.

@Carpdime we have questions, please <3 is it still your hc?

Its kind of necessary at this point because there’s a difference between Avocadoverse canon that was established during the original time Carpdime was active (aka the classic period of 2014 to 2016), the later booru period when Carpdime returned and I started writing Avocado (late 2020) and the current Fluffycommunity period, wheren there’s even more changes in Avocado’s style. Plus there’s a lot of additional material and related stories that makes the Avocadoverse “quite” complex.

Plus there’s a lot of additional material and related stories that makes the Avocadoverse “quite” complex.

Oh ho, trust me, I know what that’s like. Have you seen my catalog?

This particular piece was intended to be taken at face value. There was no manipulation or twist intended in its depiction. Just a sad yet tender moment. But as always the viewer should make up their own mind about it!

Basically yes. Oculus remembers it correctly. Avo may have been imprinted with the smell of his mother during pregnancy or the brief moments he was birthed and fell into the foal collection chute.

Which brings me to something I’ve never thought of. Avo may also recognize his siblings if they are still alive and he encounters them in real life

That actually gives me an idea… I might incorporate that into a little side story I’ll be doing next month. No spoilers though, but do stay tuned!

This comic right here is in the dictionary under “bittersweet”. To find his mother as she lies dying…oof. At least he got to say goodbye. And based on her tears, she heard him, even if she cannot reply.

Even if she doesn’t recognize his scent (though she might), just hearing a fluffy say this must be bestest happies for a dying brood mare who never got to see her children.

And now I’m tearing up. Great.

She appears to have a slight smile in the last page too, so I think she did hear him.

After everything she’s been through, one last word from one of her children acknowledging her existence and worth as a mother would mean a lot.