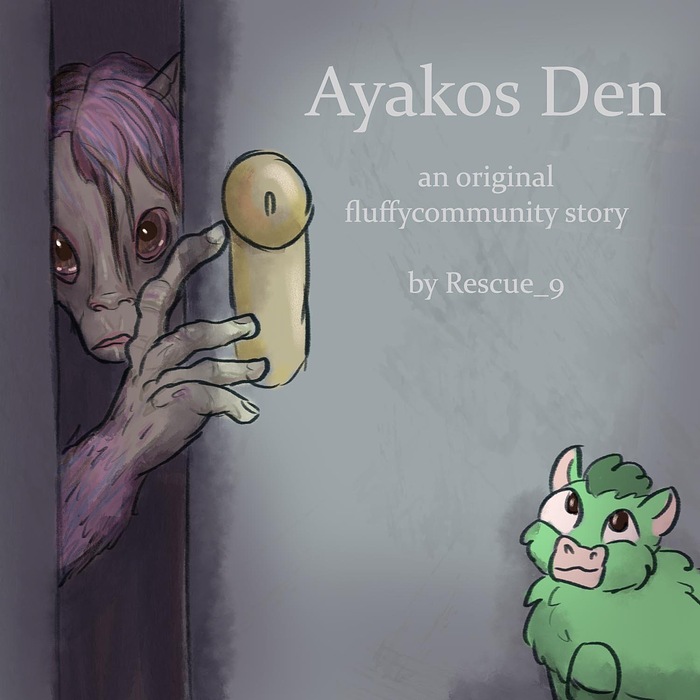 Johannes was the type of person to have a strict schedule. He woke up around 7, made coffee, fed the fluffies, and then got to work. It mostly consisted of working on scholarly articles regarding animal psychology. Although in recent years he had oriented himself towards studying the minds of fluffy ponies, which he spent most of his day doing. Fluffies like routine, and so did he.

But ayakos presence, much like the presence of a large predator, was enough to shake johannes to his core.

The fall morning began abruptly with a phone call. Well, a missed one. From a contact labeled “tanjo”. Johannes quickly yanked the phone from its charger and called. A response was almost instantaneous

“No time for apologies. How is ayako?”

Johannes fumbled for a moment “she’s doing good. The sedatives from transportation must have worn off, she’s eating now, which is good for uh-keeping her alive”

“Mhmm, she’s in the basement?”

“Yea, got her a litterbox and an old mattress. Should be enough for the week”

“-about that” the voice on the other side of the phone paused “ Nancy got arrested this morning. Not sure for what, details are unclear, but that means you’ll have to hold ayako for a lot longer since shes, you know, in police custody”

“Just keep her outta trouble, keep her contained, and keep track of what she does. Just make sure nobody sees her. When I get someone else who can house her for longer I’ll tell ya”

“Can’t you just kill her at this point? If people are getting arrested then it’s not worth keeping ayako alive”

“Shut up johan! It was apart of the nurses pact, and you know damn well Nancy was apart of it. Keep her alive so we can sell her, I just need to do a bit of searchin. Gotta find the right customer”

The phone call abruptly ended. Johannes was left in his bed, alone, staring at the ceiling with the realization he had a sin of nature now living under his feet. A creature of this caliber was something fascinating to study but simply appalling. The sort of thing that left his naturally inquisitive mind in a mess of short-circuits. Irregardless of the bombshell tanjo had dropped on him johannes moved through his daily tasks. He refilled the kibble and water dispensers in the safe room, made himself a cup of coffee, and sat down next to the door of the safe room to begin his daily journal.

“Day 567 of ongoing domestic fluffy study…” he muttered to himself as he scratched the words into his notebook “time is 7:12 am. Four out of the nine fluffies are awake. Cocoa is drinking, lilac and her mate jack are playing, pistachio is…” the scientists pen drifted off. His ears caught the sound of a shrill whine. The unanimous flicker of fluffy ears showed that the sound was not simply a figment of his imagination.

Through the grey basement door, past the flickering incandescent bulbs, and down into ayakos den. The shrill cry only got louder and more present as he approached the door. Upon opening it johannes found himself staring at ayako. She was sitting on the floor, crumpled water bottle in one hand, mouth slightly open.

“Ayako what are you doing? What’s that sound?”

She didn’t seem harmed. No visible signs of distress besides the slight twitch of her throat. For what seemed like an eternity there was nothing except silence and the laser like stare of ayako piercing the mans eyes.

Her mouth tipped open and out came a single whisper-

Ayakos voice was like that of a little girl but with a strange tone johannes could not describe. From what tenjo had told him ayako did not speak. But the contradiction he had just witnessed sent his inquisitive mind spiraling. Seemingly in an instant johannes had gone from fearing the creature “gifted” to him by tenjo, to seeing potential. He took out his pad of paper, ripped off the mornings journal, and frantically scribbled down-

Day 2 of human/ fluffy hybrid study: I’m pretty sure I can fuck it.

Day 3 of human/ fluffy hybrid study: That was a bad idea.

@Rescue9 will we see soon the characters of this story?

GIVE HER THE MIWKIES GODDAMMIT, GIVE HER ANYTHING SHE WANTS

That looked good, but I never watched it.

But I definitely got the vibe from the trailer that the monster was going to bang the dude.

Well its the other way around in the finale

The dude bangs the monster? That’s the same thing.

The guy bang her but the gene they did turned Eve into a guy and bang the girl before he got killed oh and the guy banged “her” died too.

It ended her getting pregnant but sold it to the company once she give birth.

Yup, i though Eve would become possessive with the guy that banged her turns out she eyed the woman all this time as she turned into a man

I hope its not what I think others would think that I think it should but it might not.