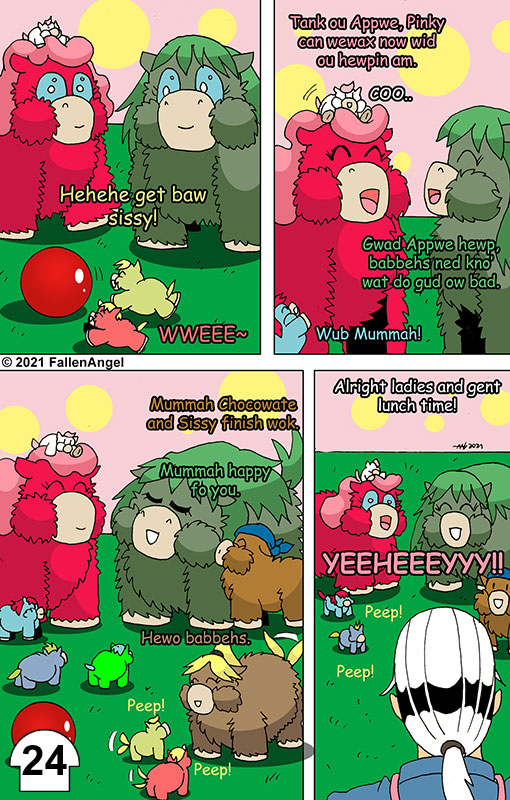 Note: I made a mistake having Coffee saying his name as Chocolate

, I didnt realize I made a wrong name cause I was doing back and forth on pages.

Thanks to @Zaraishu for notifying me bout this.

Awe, this is super adorable. So is this a fast forward to the mare and her children’s hardship, one of the foals tries to wander out before dust, (now named) Apple stops and scolds the foal for going out after dark, this prompts her to tell the story of the struggles of her family before being adopted. Did I guess right?

Chocolate? I thought you named the bandana-wearing one Coffee!

Having brown fluffies as positive role models is gonna be good for the babbehs.

Sorry bout that his name is still Coffee, this is what I get typing both pages

I better triple check it next time.

Don’t have the mother’s need to work for their food and sleeping place? Or are they breeding mare’s and the foals gonna sell when they big enough? Or work in the farm?

It depends most will soon work on the farm but they will still be on display , Samuel has his way if a foal was to be adopted

OK than, so I guess the mare’s that didn’t work on the farm are breeding mare’s than?

Samuel just taking care of them.

I see, so they are able to give milk (even they’re not their own foals). Like a regular cow, for so long you milk it daily it gives milk, even they didn’t have a calf. Work it in that way or am I wrong?

Pinky have foals of her own and two are adopted from an ol foal in a can.

Apple since a mother as well just help with the feeding of those little foals.

I see, so the green one can produce milk because she never stopped with giving milk to foals (or getting milked by a machine).