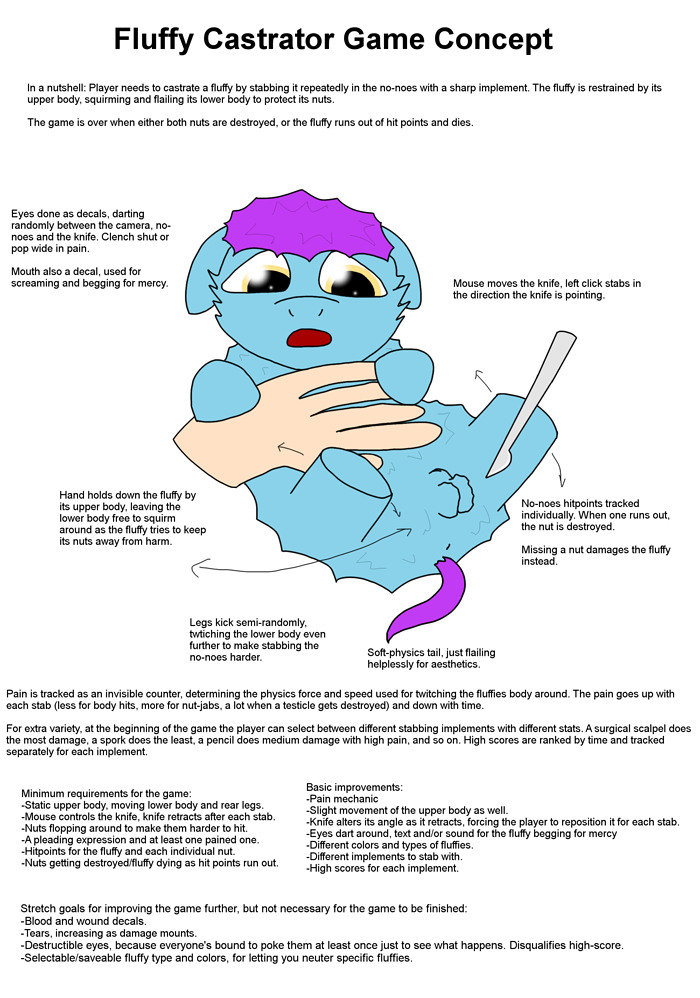 After the success of Fluffy Herder, I decided to draw up a mechanical description for another realistically-scaled fluffy game concept. After the success of Offis Tewwow I’d envision this as the second 3D fluffy game, although a 2D implementation could be possible as well. In either case, this is another project that’s going to need someone with coding skills to take off.

what about hard mode, aka female version (apparently they do have “female castration” in some parts of the world and it seems horrible)

Can we have a free mode where you can just stab the fluffy willy nilly ?

@jimmyhopkins I think you mean female circumcision. Female castration would be splaying, and that takes actual professional surgery to perform.

@AMDk7 Neutering is the win-condition for the game, but you could just stab the fluffy everywhere if you wanted to mess around. Making the fluffy react properly for it would detract from the main point though, as everything is designed around a nut-stabbing challenge.

Thats why I suggested a free mode, just for stabbies.

I think you mean female circumcision. Female castration would be splaying, and that takes actual professional surgery to perform.

still would be an interesting game mode lol

Oo! Fluffy Mumblety-peg! What an idea!

This must be in VR

Quoting my earlier answer to the same question:

It’s the perfect abuse in every way. Obviously it’s extremely painful, and can bring any fluffy to tears even without causing any damage whatsoever. And they’re so easy to hurt too - a tiniest little bump in the lumps is enough to put a stallion in agony for a long time!

But nothing compares to the psychological effect of it, violating the fluffy right in it’s most private place! They don’t even have proper words for naughty bits and barely understand them as something important that makes them a stallion, so you can imagine how terrified they must be to have their special bits hurt or injured!

I see what you did there

De nut 250 Fluffies with 0 fluffy HP being on the fluffy.

Bonus: “Docile Fluffy”, all fluffies trust what you do and don’t squirm or flail until the first nut is destroyed

De Nut 500 Fluffies with each being completely dead.

Bonus: Increased flailing and squirming, and the “Surgical Nut Cracker” means an overall nut HP reduction. With the extra movements, the fluffy’s HP is quickly reduced.

Bonus: “Franken Fluff”: you can take the dead fluffies and use them as “stuffy” dolls to give the new fluffies a 45% reduced flailing and squirming and 35% increase in trust. Does not stack with the Hugboxers bonus.

this makes me think of surgeon simulator but on fluffies.

sound like a more sinester surgeon simulator I approve!

I wouldn’t make it in 3D - making the cursor/knife move in 3D and always point to the fluffy can get quite complicated. But I could make a quick proof-of-concept of a 2D game in Unity.

My idea was that the knife would always point down but able to get into <20 degree angles between jabs, making aiming it correctly part of the challenge. Clicking would instantly launch it in the direction of the blade until it collides with something, dealing its damage to the object and then rising back up in another random angle to prevent the player from just spam-clicking the fluffy too easily.

But I’m very grateful for a 2D version nevertheless. Thanks you!

fuck, somebody get @fluffiesarefood on the line, asap