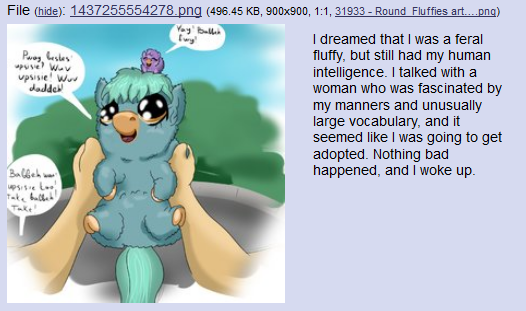 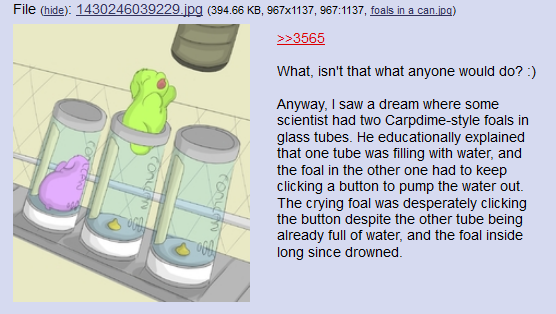 I finally decided to post all my saved fluffy dreams here, after dreaming about Somethingcheeky’s anthro fluffy wearing Senketsu from Kill-la-Kill last night. She introduced me to the concept of jumping between realities, but after than that the dream continued non-fluffy related.

For anyone wanting to remember their dreams better, here’s the memo I wrote immediately after waking up:

“Somethingcheeky killakill gunworld boobcomicfurries everywhere, anomalies with big heads and anomalous mouth, get off my tractor. G8 hurtingspring. Shot through door, shoot eyes instead of punishment, made zombie gunrunners problem.”

It seems like gibberish, but it’s actually keywords for every concept I could remember. With absolutely anything to remember what there was to remember in a dream, it becomes much easier to then sit down and write everything down properly.

Fluffy dreams are always interesting to hear about, so be sure to write them when you see them!

Huh, so even in your dreams you are the Ballbuster. Neat.

That made me smile actually

You’re a nutcase aren’t you?

I wish I could dream of fluffies, for non-hugboxy reasons

Just had a new fluffy dream last night. I was in a world of furries, similar to the world of Toons in Who Framed Roger Rabbit. It was a pretty casual holiday destination for humans, with a comfy Finnish bar, and a parkour-style obstacle course about squeezing through tight tubes which was my favorite attraction there. I also met Snoop Dogg, but most relevant part is that the world also had fluffies.

I caught myself a light grey, roughly watermelon-sized fluffy. It’s fluff was soft like the belly of a cat, and it had a nice pair of marble-sized testicles. At first I tried to punch them, but they were so small it wasn’t really effective so I started slapping them instead. I also pinching them rapidly between the slappings, and while they were small and slippery, the frantic screams of the fluffy made it clear they still hurt a lot!

I also pinching them rapidly between the slappings, and while they were small and slippery, the frantic screams of the fluffy made it clear they still hurt a lot!

When I first joined the booru I had a dream that I went to a comic book convention. In the back room there was a small tent where you could get fluffy pony merchandise. There was a small kids backpack that looked like it was made out of a skinned fluffy pony on the back. Because it was so soft and brightly colored, it looked just like a regular kid’s backpack with a plush toy on the back…

I’ve had one dream about fluffies I can remember.
Not a lot happened that involved the fluffies, they were just there.
There was a bad snowstorm approaching and my cat was outside, so I was looking for him around the neighborhood, then when I get home, my yard is crawling with fluffies, and my cat is running around ripping them all apart, but there’s too many of them to be able to run away, they just keep stumbling over themselves and piling up while my cat was running rampant through the crowd killing. Then after the fluffies started to thin out, a bunch of big, fast lizards showed up, like mean ass alien monitor lizards (fox-sized), and they killed the remaining fluffies and started attacking me, then my cat started fighting the lizards and he ripped a couple of them apart but I could see him getting cut up so I caught him and just wrapped him up like a football in my arms so the lizards couldn’t get him. The images from the dream I really remember that stuck out is the dead lizards and fluffies strewn about everywhere, and me holding my cat with lacerations in his leg from the lizards. 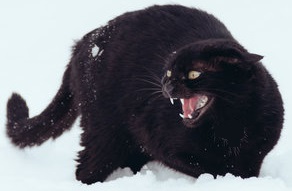 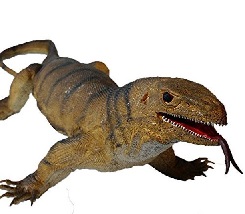 Last night I had my first fluffy nightmare. I was at my old childhood home, and we had a pet fluffy there. It complained about its nono-stick, and I snickered at the idea that maybe fluffies couldn’t get their boners to go down without some form of external help. I flipped it over, but while its nuts were the same size as in all my dreams, they were two separate lumps instead of two balls in the same pouch. Anyway, I proceeded to slap him between the legs - which had no effect whatsoever. I tried again harder, but when that didn’t work either I grabbed his nuts and squeezed. This time, instead of flexing and compressing as expected, they crunched like a bagfull of dry chips, causing me to recoil in horror and wake up.

I don’t think I’ve ever had a dream about fluffies, but I did once dream that my dog could talk like a fluffy.

I’ve written a story about the fluffy Dreamtime, which is basically their dreamed Skettiland, which you might enjoy reading.

I just had my first fluffy-related dream, and it was a very meta one.

I dreamt that the artist Waggytail had joined the site and was starting to reupliad his art. He also gave an “interview” of sorts. I tried to message him, but he wasn’t on.

And then I woke up. And felt even more depressed.

In my latest fluffy dream, I was fleeing something in a small submarine with a fluffy as my crew. I got an idea to pressurize the air inside the ship to make it denser and thus make it sink faster, and then release the excess air to switch from sinking to rising quicker than our pursuer could react to. My fluffy crewmate was a Booperino-style fluffy so I could expect some competence from him, but I still had to think really hard on how to word the orders to him so he won’t misunderstand it and either fill the ship to the point it explodes, or release all the air and fill it with water.

Here’s another fluffy dream from the time Fluffycommunity was down:

I was an agent in a futuristic setting, trying to arrest a woman who had a white fluffy and a polar bear on her side. I had two pistol crossbow-shaped energy weapons, but in a fight with her and her mind-controlled bear they eventually turned out to have literally zero effect whatsoever. However, with some tactical maneuvering I managed to kick the bear in the balls, and THAT worked as well as ever!

I somehow managed to reprogram the bear to be on my side, but the woman had managed to flee through a warehouse. However, her fluffy was much slower, and while I couldn’t catch it due to it running under low shelving units, somehow the bear (now more like a dog) did, and managed to fetch the cybernetically-enhanced fluffy to me. As a standard measure I tore off one of its legs so it couldn’t escape, but then I noticed that the bear had also bit its head off while catching it so there wasn’t anything left to interrogate.

How do you get dreams with actual plots? Mine are nearly always nonsensical-

The most important part is just remembering them, for which I posted my method in the opening post. As for actual plots, I’ve always seen them that way, but from what science says, playing videogames is great for increasing the quality of your dreams.

Since this is a good opportunity for it, I’d like to recommend giving a try to Outer Wilds: an absolutely fantastic game about exploring a strange little solar system:

I once had a dream of Poseiden was battling a fluffy and the fluffy was actually doing quite well.

I remember a seven hour dream from a week ago where I was trying to describe god to my friends in chat based on a polariod of them.

I then took the dog outside and went back to sleep for 2 hours until I had to get up and had a dream from the perspective of my character in rise of the runelords game (a bloatmage transmuter). I just learned alter self is all im gonna say.

I haven’t had any fluffy dreams but I’m convinced I am some kind of intergalactic traveler who jumps to other realitys whilst I dream, I have such vivid dreams where I can feel everything!! It’s hard to tell dreams from reality at times, I often fall asleep thinking about fluffys yet they don’t want to actually be apart of my dreams…yet