I don’t know what you think about it, but it shouldn’t be pleasant to be hugged by a bloated naked skin. 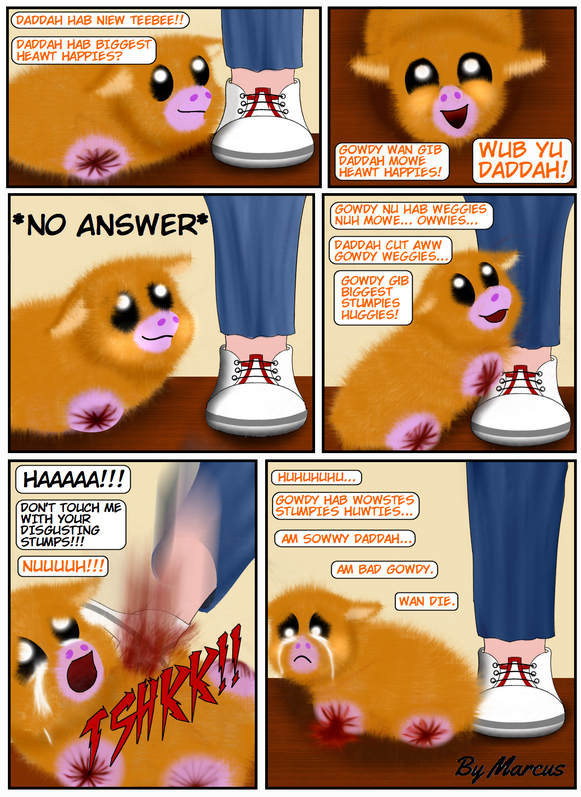 List of the adventures of Goldy the Pillowfluff :
No weggies no huggies
Stumpy huggies
Bad poopies
A walk in the park

By the way, If someone is interested I created a ko-fi page.

As I said, compared to Lilblue story, Goldy suffering will be more psychological than physical. Or, at least, I try to do it this way.

But why do you have low functioning little horse potato if the stumps creep you out?

Fair play to Goldy to not giving up on the hugs despite having no arms.

But that only serves to shit on him even more

The obvious reason would be, “suffering is hilarious.”

Now stomp on his crotch!

Damn, I should have called him “Potato” than “Goldy”…

Shave him and give him a light baking.

I was gonna say ‘That explains the carpet color’ till I realized that it was probably a wood floor.

Figured it was a play on Yukon Gold potatoes.

Love this idea. Bring on the suffering!

Nah, you could have it that he was called Goldy because his owner thought his gold coat would be big bucks. Only for Goldy to produce nothing but shitty colours.

Goldy’s taken away from the breeding, at which point he starts getting antsy over his “special-friends” and babbehs. His owner gets pissed off and takes his legs to keep him still, making the stump hatred all the more heartbreaking.

Probably too lazy to just get rid of him, I know that feeling

Those are some fresh white shoes, I get it. You wouldn’t want a fluffy getting its blood on them with nasty gross stumps.