“Why the hell does Mrs. Cooter have so goddamn many fluffies here?”
Bob had sorted through at least 80 fluffies. It seemed to be a mix of
25% Stallions or colts
35% mares with foals.
10% mares without foals
and 24% babies that were too big to need milk anymore.

The remaining 6% were the shit-eaters.
These were the runts, the deformed babies, and the babies that were unlucky enough to be born to a bad mother, and yet they still hadn’t died from their neglect and abuse.
Damn near every one of them had subsisted on eating feces. They weren’t allowed near the herd, and certainly nowhere near the feed troughs. So if they wanted to live, they had to eat the poopies that all the other fluffies had left behind.

“Kept in the dark and fed on shit. Yeah, I understand you ‘poopie babies’ very well.”
Bob muttered as he chucked one more runt into a 55 gallon barrel.
The wall behind the barrel was starting to look like a bloody bullseye where he’d bounced so many tiny bodies off of it.
“It breaks my heart that you’re dying like this. I wouldn’t wish that sort of life on my worst enemy.
But I have a job to do.”

Mares and babies were complaining now. They had run out of “sketties”. Again.
Did Mrs. Cooter really feed them this much every week?
He refilled their slop from his bucket and felt the scoop drag across the bottom of the plastic container.
“Jesus you fucking shitrats eat a lot.”
The fluffies didn’t care what he said, so long as he kept refilling their troughs with the cold spaghetti.

While Mrs. Cooter seemed to have no idea how to properly run a breeding farm, she did keep adequate equipment on hand. In the medicine cabinet there were a couple hundred ear tags in five different colors, each with unique numbers.
There was even a ratcheting tag-applicator to use them with.

Bob glanced into the room where all the fluffies were now penned, loudly complaining that they had no room, or clambering over each other to get to the last remaining dregs of “sketti”.

“The dumb bitch had actually bought ear-tags, and didn’t ever use a goddamn one of them?”
This seemed to be the case, because the tag applicator was still inside it’s plastic clamshell case. The staples holding the case shut hadn’t even been bent.

“Well, I guess that’s where we start.”

There were four colors of ear-tag.
pink
blue
yellow
and orange
Easy to tell apart from a long distance.
Absolutely perfect.
Pink for breeding mares. Blue for stallions.
Yellow for fillies. Orange for colts and geldings.
All that he had to do was punch holes in about 80 ears.

This barn had been set up for full-sized horses at one time. It had four doors exiting the main chamber of the barn. Each of those doors opened into a different,and separate, pasture or pen.
That was a bit of luck Bob hadn’t expected.

♫ Hay Babies!♪ (this is not misspelled)
Bob sang to them through the doorway
The fluffies were loudly complaining. Most of the bitching was coming from the mares-with-babies pen.
“Aww da skettis gahn an fwuffies wan go pway! Wet fwuwwies owt!”
“Shhhh, settle down, you’re going to be let out. In fact, I’ll let you and your babies out first. What’s your name?”
The mare’s countenance softened considerably when she was told that she would be let out first.
“Fwuffy am Chugah! Chugah da bestest mawe in aww da fawm! Chugah got wossa pwiddy babbehs!”
He nodded “Sugar, you say?”
The mare nodded excitedly and pulled her seven babies forward in the pen
“Yuh huh! Am Chugah! Un dis be awwwww Chugah pwiddy babehs!”
Two runts, three shit-colored chirpies, a blue colt, and a yellow filly stood somewhat proudly at the pen wall.
…
“So you’re ready to get out of the pen?”
“Yuh huh! Yuh huh! Chugah wan go pway nao!”
“Alright then. But we have to do one thing before you can all go play. Do you want to go first, Sugar?”
“Yep!” her little tail wagged furiously, slinging wet shit all over the fluffies next to her
“Alright then, come with me.”

Bob picked the off-white mare up, holding her away from him because she was still flinging shit all over the place, and he carried her into the medical room. He put her down inside the utility sink.

"Chugah wub nyu Daddeh! " Chugah gon’ teww aww her babbehs how Nyu Daddeh sabe Chugah fiwst!
Ye-ah, we’ll see what Sugar has to say when we’re done here, thought Farmer Bob
He loaded the tag applicator with the very first pink tag.
Number 000001
Bob chose to tag their left ear, just because it was easier for a right-handed person to do while the fluffy was looking at him.
He slid the tag over her ear and winked at the fluffy
“Hey Sugar. What’s your favorite thing in the world?”
Her eyes instantly widened and brimmed with happy tears
“Chugah jus WUV sketties, speshuwwy wen Chugah fin MEETBAWS innit an…!”
As the mare chattered on about her favorite treat, Bob squeezed the handle of the applicator, instantly punching a hole through her ear and affixing the tag through it.

It took a couple of seconds for the pain to make it’s way to Sugar’s brain. She had gone on to list three of her favorite aspects of “sketti” before she realized she had been hurt.
Her little jaw dropped open, and she let out her loudest, highest-pitched screech
“AAAAAAIIIIIIIIIIIIIIIIIII !”
“Ssshhhhh, settle, settle, settle” Farmer Bob cooed at the little fluff “We’re done, and you can go out now.”
Bob opened the gate to the North pasture and gave Sugar a gentle toss out the door.
She was still too stunned to completely voice her displeasure.

This process was repeated over…and over…and over…until finally all that were left in the pens were a lot of shit-eaters…and Panini still licking his minuscule wounds.
Mares and their children were sent out into the North pasture.
Fillies that were not old enough to breed went into the West pasture.
Stallions were corralled in the small South paddock.
Unclaimed babies had a creche that looked like it had never been used, in the East paddock.

Bob cast a sad eye over the little shit-eaters.
There were five alicorn in this group. He’d heard about how fluffies would accept unicorns, and pegasi, but if the baby had both wings and a horn they were considered “monsters” by the herd.
Such a damn shame. They could have been incredibly good fluffies.
But Bob didn’t get to make the rules of the world. He simply had to follow them.
He stepped over the pen wall and knelt down among the runts and the deformed.
He picked the closest one up, and watched as it gasped for breath.
It was just about the only fluffy that didn’t shit on him when he picked it up.
The poor thing hadn’t eaten enough in the past week to be able to shit.
Bob took no pleasure in knocking the fluffy’s head against a wooden post before tossing it into the garbage barrel.
It’s just another job to be done.
Just another job to be done.
Just another job.
Just a job.

And at last there were only Bob, and Panini, left in the barn.
Panini had long since curled up and covered his eyes so he didn’t see all the other fluffies enjoying what he still thought of as “His sketti”

Bob stepped across the pen wall, and knelt down across the way from Panini, sliding down the wall until he was sitting in shit-stained hay.
He lit a cigarette and looked off, out the window.
Panini peeked out from under his hooves, covering up again whenever Bob looked his way.

He had burned through half the cigarette before he spoke
“Are you sorry yet?”
The beautiful little mound of fluff started to shudder. Panini mewed remorsefully
“Yu…yus.”
Bob took another drag from his smoke
“Are you ready to be a good Fluffy and do what I say?”
Now Panini looked up at Farmer Bob with tear-streaked eyes
“YUS! Puhneenee be gud fwuffy! Nu huwt ubbah fwuffies nu moah!”

Bob stood to his feet, and reached down for Panini. The stallion started pissing all over himself when he was picked up.
“Settle down, settle down. You’re okay.” Bob whispered.
He took Panini to the sink, and readied a blue tag in the applicator.

Farmer bob didn’t warn Panini as he clamped the tag applicator onto his ear. The wide base of the tag punched cleanly through his tender skin and out the other side, locking in place with a loud CLICK!.
The fluffy wailed as though he’d had his heart ripped out.
He continued to scream and mewl when Bob left the room, and picked up the bucket he had used to dispense spaghetti to the pens.
He scraped his spoon around the edges and corners of the bucket, gathering up a small handful of spaghetti, and he emptied that into a small bowl, setting it down in front of Panini.

The fluffy’s wails were cut off mid-stream, and his wittle…err…Little sad eyes changed almost instantly into happy ones.

Panini wolfed down his ‘sketties’
He promised to be good from that day forward.
He thanked Farmer Bob, and professed his everlasting love to the overseer for his mercy.

“If only they could all be so easy to convince.” 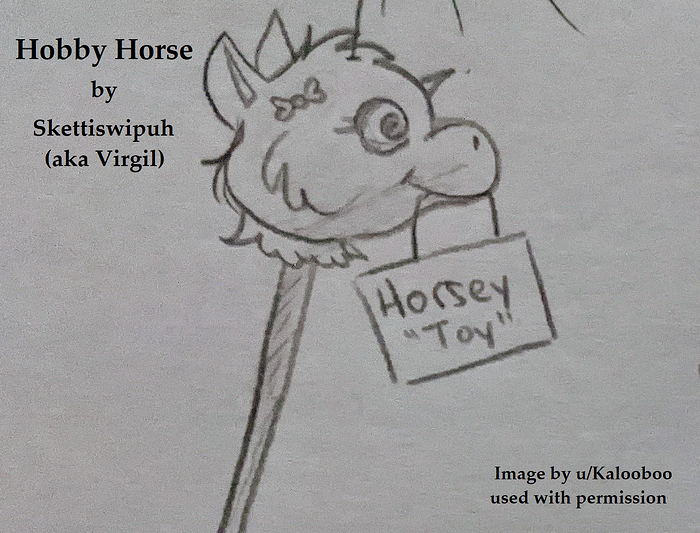 Dude, Alicorns, even “bad” colored ones sell for a lot. Is Bob fucking senile? If he is working with Fluffies he should know what types people want, and even brown or other “off” color Alis sell for bank.

This is the case in EVERY version of cannon that is out there, if that isn’t the case in yours, it would be appreciated if that was posted somewhere so people could get an idea of if they would like reading your stories.

Think of it as a person inexperienced with raising fluffies
thrust into the job with zero training
and who only knew that he had to make massive changes.

But in my opinion, even though alicorns are rare, they’re only worth what people will pay for them.
And people don’t pay for runts, shit-eaters, or generally mistreated stock.

I base this on my years of raising livestock.