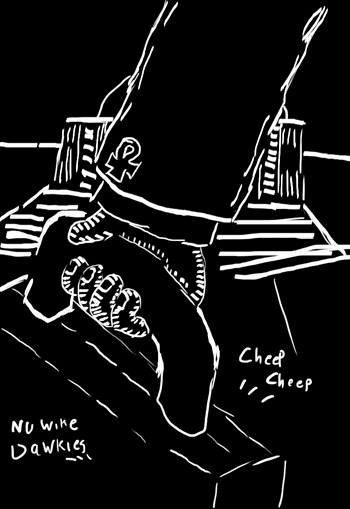 A shrieking protester stood right in Bill’s path. “Shame on Foal-Fucker! You’re Black, how can you tolerate SLAVERY of TALKING BEINGS!!” Nope. Don’t take the bait. You have a presentation to give a bunch of pretentious assholes who couldn’t find the will of the people with… with…

Bill struggled to come up with an appropriate will of the people finder as he sidestepped the woman with hair colors that would be garish even on a fluffy, and into some living pig-man in threeper LARP gear. “Horses are symbols of our frontier spirit and heritage, how dare you!” Bill wished he could crush the frontier mentality as easily as he could a fluffy. There was no frontier anymore. And Symbolism? Fuck, he’d love Cuck Suckmeh, the head democrat. Useless symbolic gestures fall out of that man’s asshole as easy as breathing.

Bill forced his way past, hanging on to his briefcase for dear life, thinking “Well, at least Hasbio’s brought Americans together again” as some loser in a PETA shirt cried out “SPECIEST!” This earned funny looks from the other protesters. Bill hated these anti-humanist fucks worst of all, though the other idiot who didn’t understand how fluffies worked was treading similar ground.

His briefcase chirped as he went inside to a meeting that would determine the future of Hasbio and the world, though not for the reasons he thought.

Bill was scanned for metal, which he had fastidiously avoided in his dress and briefcase. The senate was still on the previous item, so he settled in and waited.
He had never played “Candy Crush” before, nor did it qualify as a “Saga.” But by the time the Senate was ready for him, he was a pro.

“… and as you can see, the silicon “brain” comes pre-loaded with behaviors. They don’t actually feel or think as much as they use deep learning. They’re programmed to behave in certain ways.”

“What if these things get loose?” Senator Burt Sandy, one of the few politicians Bill didn’t loathe on some level said in his grating accent. “All fluffies are sold spayed/neutered, so they won’t invade an ecosystem, and if the unthinkable were to happen, they’re too stupid to last long. Like I said, they don’t really think or feel, they just act as though they do. They’re pre-loaded to trust humans too.”

He reached in his briefcase and pulled a demo foal. “Nyu Daddeh?” it asked as it was shown to the assembled pols. They were hooked. Even gruff old Senator Sandy struggled to maintain his composure. “You can touch it and even play with it.” Bill handed a nearby Senator the foal. “Pass it around, get a feel for it.”

Everything was going great until it reached Senator Ted Cooze.

“I’m going to make you into a sweet heart from the ground-up!” He promptly shoved the fluffy right up his ass.

“I got next!” declared Senator Heehaw.

Minority leader Rich Macdonald rolled his cadaverous eyes. “Gawddamnit, Ted.” he croaked. Bill produced another foal and handed it to Majority leader Cuck Suchmeh, who looked and acted like the product of a Nazi propagandist’s fever dream. “What if someone were to… eat… one of these things?”

“They’re quite edible. Healthy, even. The taste is somewhere between beef and venison, though it’s got a nutritional value like chicken.”

“Are they Kosher?” Senator Suchmeh asked, hopefully. He then passed the foal to equally decrepit and senile Senator Fineschitz.

“They aren’t programmed for that. But we do have a fix in the event of the unthinkable.” Bill pulled out a spray bottle, unscrewed the cap, and took a swig from it. A third demo foal, the “smarty” was readied. “This fluid is entirely harmless to carbon based life.” The smarty raspberried at the senate.“Dis Smawty wand nao! Gib Sketties and Huggies to Smawty or Get Fowebah Poopies!” The smarty turned it’s ass to the senate and strained against the chrome poop plug.

“A defective model. Attempts at loading a “cute, rebellious” persona haven’t gone so well.” Bill sprayed it with the bottle, and it shrieked as it’s skin and bones dissolved. Some of the Senators were disgusted, others intrigued. Most were some of both.

“The fluffy is, in part, a silicon based lifeform. This chemical targets those parts and is harmless to carbon based life. Now if you’ll pay attention to the potential applications of this technology…”

The vote passed 79-13. Fluffies were officially biotoys. And as for the President, well, he’d certainly help a brother out - his daughters adored their new foals. Top-grade pet quality.

This was the first time Bill had beaten the insurance cartels. It would not be the last. They knew Bill’s endgame was cheap organ printing, and he’d bury those jackals with it. He’d managed to swing the guys in the pockets of big pharma with talk of medicinal creatures, which was enough.

But the wife was in town, and Bill had some top shelf booze, pretty decent grass, and a spare foal left over from the presentation. It was immature, sure, but they were going to trash the Royal Suite at the Four Seasons tonight.