Dear abusers,
gimme your worst, gnarliest, terrible, immoral, illegal, and darkest ideas of fluffy abuse. Something you want but no one will draw it for you. Something that’d make serial killers shudder. Something so raw and grim that… you get the point

Do written stories count as ideas? Cause I have a story me and a different user made last year that you could possibly do.

having several foals prepped on a golf course with their mother nearby. abuser asks her cruel questions like “why should your babies live?” or “which foal should die first?” with each failure to answer resulting in the abuser hitting them like a golf ball towards their pillowed father further down the range.

Sure! but imma probably do only one or two scenes, I can’t draw super long comic ^^"

uuu I like that! Now to learn how to draw golf stuff lmao

Nailing a fluffy to a flaing rack, than making a small cut in his belly and starting to pull his intestines slowly out of it but no ripping them. Just getting them out so the fluffy sees it happen. After there all out sprinkle sugar on to Tham and put Ants on the intestines.

I’ve always wondered about skinning. Separating fluffy from pelt so that they’re nothing but all the raw muscle and whatnot underneath. All the real world, associated medical conditions aside (depending on whether the fluffies in in question are susceptible to septic shock, etc.), how would a raw muscle-exposed fluffy suffer?

Sort of a mix of Hellraiser and Event Horizon.

I always love the idea of tearing a Smarty father in half, in front of his Special friend and Kids. oh and by tear in half, i mean hand on top and bottom parts of its Jaw, and tearing till the Tummy Sketti plopps out.

If not strong enough, you can achive the same effect by hooking the Smarties lower jaw to a suspended, as seen in this very crude drawing in MS paint. 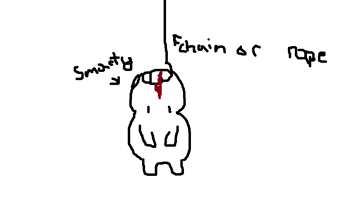 A spider nested in the hollowed out eye socket of an otherwise healthy fluffy and the eggsac hatches releasing hundreds of spiderlings. 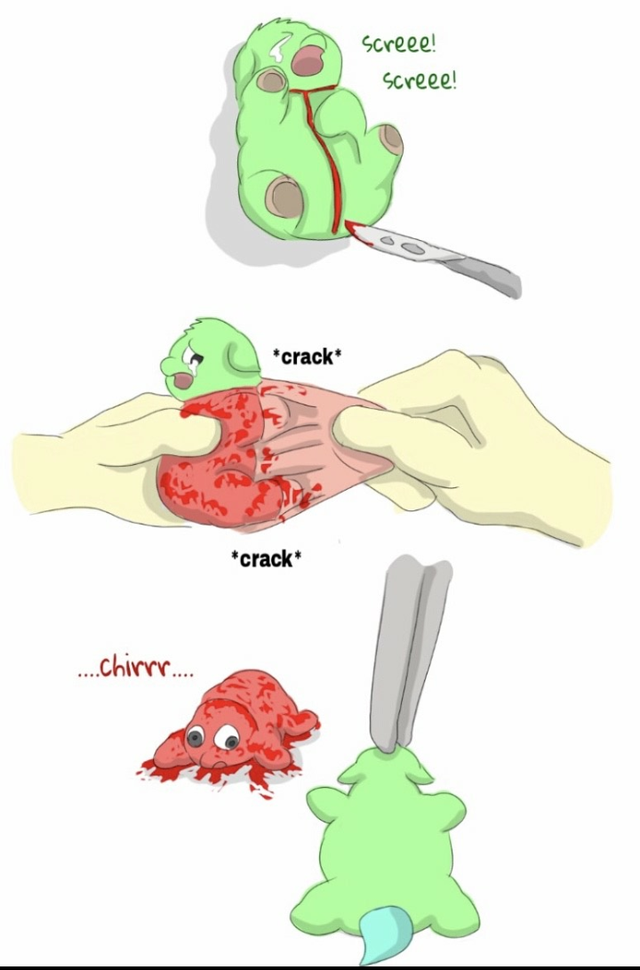 holy fuck, I’d shit myself before finishing the drawing (arachnophobia) but it might be cool with some other, non-spider animal lmao

How about wasps? Then you could have the nest growing out from the eye socket with adults crawling in and out.

Can I use the characters there, or should I use different fluffs?

You can play the fish hook game. Put fishhooks through the lips/legs/wings/horn ect. Then ask a question. If the fluffy answers wrong, pull out a hook. It’s more funny if you ask questions they might know. Then show their new appearence in a mirror

You can have a mother and foal. You can make her choose. Will she be fed/not punished or will you spare the foal. The point is to watch them wither away and guilt them.

Make them swallow glass, then watch until they die.

You can tie up their legs and break them, hobbling them. You can also light their legs on fire, cooking them until they are good. Then make them run away from rats or dogs, which then eat their legs and then the rest of the fluffy.

Alright, here’s an idea I had but never took the time to write.
I’ll be happy just to have the idea out in the open.

Forever Sketties
>Two fluffies are bought from the local market
>Only needed one, but the little gray male was so upset when his pink friend in the next cage was selected that the cashier sent him along with you
>Kinda awkward. Only got one aquarium for the fluffy you’d expected
>Oh well. Whatever.
>Give each fluffy a ball of string soaked in sugar water.
>Feed them one end. They happily slurp down the strand. Neither knew what sketties were supposed to taste like anyway
>Further and further the single strand goes down into their bellies
>Gulp after gulp, they happily cheer at their good fortune
>Some hours later they poop the end of the string out
>Still numming the sugary string
>Tie one end of the strings back to their beginnings
>Fluffies swallow the knot and barely notice that there’s a flavor other than sugar to the string
>Pick both fluffies up
>Put them in the aquarium
>A couple inches of simple syrup in the bottom of the tank
>Have to be careful not to get the level high enough to drown them
>Little Gray is complaining about being bored from eating so much good sketties
>Pink admonishes him for being so ungrateful
>For days the string loops down into the supersaturated sugar water
>Back into the fluffy
>Back out of the fluffy
>Sugar crystals begin to grow on the string
>brown and red strand of encrustations
>Fluffies don’t have jaws strong enough to break up the crystals, nor a digestive tract strong enough to dissolve them
>The rise in pain in their mouths and anuses is so gradual that the fluffies don’t even notice
>Pink eventually comes to be bored, and later scared of what is happening
>Doesn’t say a word about her concerns to Gray
>Can’t admit that he was right
>Crystal-covered string is definitely still sugary
>Doesn’t taste half as pretty as it looks
>Fourth week rolls around
>Monday
>Science fair
>The fluffs are carried off to school in a box
>Gray has long since stopped even trying to eat his sugary string
>Pink would be happy just to be able to poop it out
>Demonstration time
>The young fluffs are slowly lifted by the string protruding from their butts
>Spiked string slides easily through the pink fluff
>Gets stuck in the gray
>Bounce him like a yo-yo until he slides too
>Abject horror
>Sugar crystals rip through their intestines, taking pieces with it on it’s way around the circuit
>Cut the string
>Takes three more minutes to be pulled the rest of the way through the fluffs
>Thunderous applause
>Blue ribbon
>Fluffies crawl to each other
>Huggies to make it all better
>Neither wants sketties anymore

Nothing much I want since you’ve removed humans from the equation, but I can suggest ideas in general. Though torment of real owners with kidnapped pet corpses and random surprise Fluffies airdropped over unsuspecting towns which lures even more are better ideas than most things you could have happen to a Fluffy.

Granting them human intelligence on purpose, then doing heinous things anyway.
Unlocking the restrictions in their programming, attaching a Fluffy brain to a human one in a jar which is connected by tubes and wires back into the Fluffy’s skull, magic, and so on. However you want to explain it.

Its not Anthro, but it is removing the separation between the anthropomorphic horse toys and another human. No handwaves like not having souls, running off literal computer if/then/else programming, lacking the ability to feel more than one emotion at once, or any other reasoning can apply. The torturer seems far more vile and the Fluffy’s pain is intensified with complete understanding.

Basically everything else has been done. Its a far more elaborate setup for anything to hit beyond standard creative Abuse, and even then most things would be for the human or some kind of highly intelligent Fluffy.

Being more general you have tarantula hawk wasp and bullet ant venom, the most painful things we know of that are not lethal. Barring the idea Fluffies can spontaneously sad themselves to death from fragility anyway. While the Elfen Lied “you hit me with the worst pain, now there is nowhere for you to go so I can withstand all else” logic can be used in some cases and after exposure then all other sources of pain for the rest of that Fluffy’s life may be highly mild, but those literally cannot be resisted because their chemical nature forces a response, they interject you with unignorable pain. Just hook a Fluffy up to a steady drip. For a visual you can look up people exposing themselves to it on youtube.

You have some of the horrid myths of slavemasters in the American south telling slaves they’d be slaves in the afterlife too but without rest. Except making it real.

A self-perpetuating mill powered only by sunlight and otherwise fully automated where Fluffies are birthed, raised, and brutally mutilated then fed to other Fluffies in the start of the cycle. Like Carpdime’s Fluffy hunting ground comic, only its a tall factory fenced off on some rich dude’s estate where its designed to just run without aid so he always knows that there is always ten or so Fluffies dying terribly back home and that it will run for at least a century after his death before the first parts start breaking down, but even then it’ll still probably be causing suffering for many years before fully breaking down. Maybe fill them with hope, each age they are brought up a level and they can’t wait for sunlight but conditions get far worse each level until they see sunlight for the first time but are skinless and crippled with muscle ripped off their flesh by needles fiber by fiber, final execution coming after a prolonged siren in their ears so they die at maximum terror.

Maybe the worst would be introducing a mutagen of some kind that would mutate them all into more xenophobic brown cross-eyed Alicorns, maybe saying it spreads through air and manufacturing it in a common product nobody would suspect so it happens almost everywhere, maybe in common cleaning agents. Fluffies would all hate each other, hate themselves, kill each other, breed only through rape with a high chance of females resisting their attacker and sparing no offspring ever. Public loses interest as all novelty of form dies off and Fluffies go 99% extinct.

reminds me - friend’s kitten ate a small string. later friend had to help gently pull the string from the… another end
cat is alive and happy, now 9 years old!