Reuploading this old painting I had posted to the booru during its final year. A few fluffies from a forest herd just waking up to start their day as the smarty sends our orders to toughies to assume their posts. I like to think that it’s an unusually functional herd with a smarty that thinks ahead, understands cycles like seasons and learns basic use of materials found in the woods, like bark for crude back armor, sticks for partially sealing entrances to dens and stones to keep water out of them during rainy days.

A genius between genius for a fluffy then.

I love your art style, looking forward to seeing more of your work. Let me know if you do commissions as well.

Don’t forget your name in the title.

Don’t forget your name in the title.

An all of your posts please. We should’ve told you when you first posted

AAAAaaaaaa!! I absolutely love this piece

Unironically, this is beautiful.

I love your art

Now THAT is a smarty who is actually smart. Much better chances of survival in the forest, making proper dens and hoarding like rodents, than begging or making demands for nummies or housies.

Beautiful work with shadows and lighting,and the twists and knots in the tree look great.

What a lovely picture! I don’t know who first came up with the idea of fluffies living under / in trees, but it reminds me of Wind in the Willows or Winnie the Pooh.

I really love the work here. The detail, everything going on, the characters.

Its an awesome art

Oh, I love the idea of darwinism gradually selecting for fluffies who are smarter and smarter about things like avoiding humans, controlling their population and mutual care. As chimaeras with the minds of 3 year olds, their abstract though is very limited, but it’s so interesting to read stories where the smartest of them are very aware of their ignorance and, so, are able to take precautions by counting on it. I’m more of a hugboxer, but abuse, sadness, tragedy and all the bad things that can happen to fluffies are what gives good things meaning. A story needs

@FosterFluffy89 Wasn’t this an illustration of one of @differential_Sloth 's stories?

Not exactly. Although I’ve recently made a little bit of fanart of some core characters in Kerry’s Story, by @differential_Sloth , this piece was just inspired by the kind of herd depicted in it. Selected to be smarter about life in wilderness, protecting against the elements, rationing food and even imposing population control so they can brave the unknown. 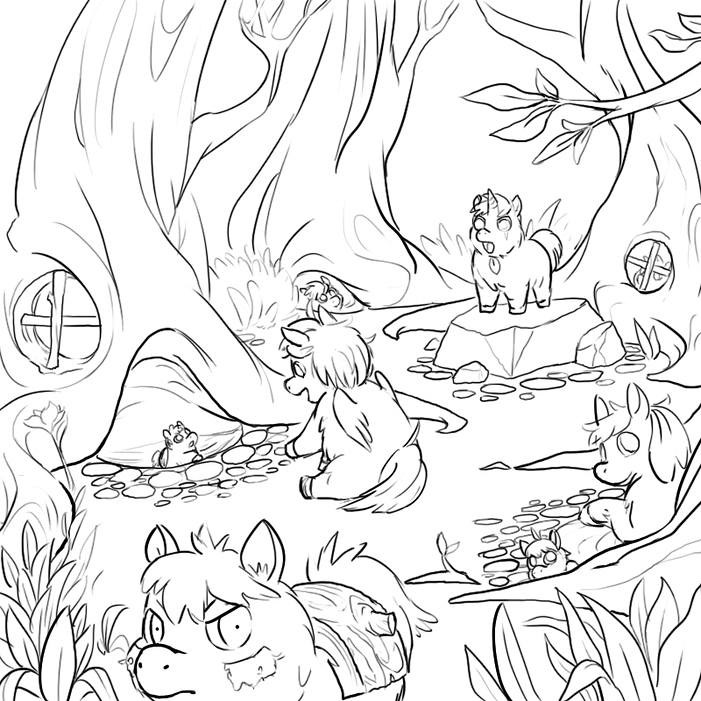