Story and Art by Carpdime

It was Friday night, the time was past 9pm and Ruby waited in anticipation in the dimly lit dormitory for the return of her owner Becky. Nestled in her soft warm blanket, her stomach full from the platter of kibble that now sat empty before her.

In the background, the radio was playing some soft music, tuned to the same easy listening station that Becky had set before heading out for classes and work some 14 hours before.

Just then, the metallic jingle of keys could be heard outside the dormitory where Ruby had spent the whole day. As the door cracked upon, the familiar sight of a young woman with shoulder length brown hair greeted Ruby’s eyes.

“Hey Ruby, I’m home! Whatcha do today?” Becky said in her upbeat midwestern accent, hiding her worries and weariness. She slung her backpack onto a coat hook and placed her shoes into a box beside the door.

Ruby’s observant eyes followed her owner as she tiredly made her way to the microwave to reheat some leftover chicken for a belated dinner.

“Wuby wisten to music an wead about camping.” The fluffy placed her hard, elderly hoof onto the simple fluffy book that was beside her. “Camping wooks fun…”

“Is that the book that Avocado borrowed for you from the Fluffy Library?” Becky asked between bites of her lukewarm dinner.

Avocado was a clever green fluffy that belonged to Mark who was friends with Becky. Though they had not known each other very long, there was an ease and enthusiasm in their manner that made Ruby feel at home in their company.

Avocado had thoughtfully borrowed some extra books for Ruby. The books covered a variety of topics that Avocado found interesting. Things like cars and rockets, animals and nature. Ruby didn’t mind those topics, being a curious and imaginative fluffy herself, Ruby lapped up the content within those books.

“Have you been camping before? I should take you camping this weekend. I feel bad for spending so little time with you during the week.”

The young woman frowned with disappointment and picked up the red fluffy into an embrace.

“I’m sorry sweetie, I miss you too. It’s just that classes and work is so…” she paused. She didn’t want to worry Ruby, “I’ll take you camping this weekend to make up for lost time.”

After she was done with dinner, Becky kept Ruby on her lap as she reviewed her tight weekly budget before starting her homework and assignments which ran late into the night.

The few precious hours sitting quietly on Becky’s lap were the highlight of the fluffy’s day. The clicking of the keyboard and the rustling of textbook pages reminded Ruby of her owner’s presence. The comfort of security eased her sleepy mind into her favorite world of dreams, a world where Becky did not come home so tired every night and where she could spend her days quietly observing the world outside the four walls of their tiny dormitory.

The sun’s first light woke Ruby from her recharging sleep. Much to her surprise, she was still laid across Becky’s lap, her owner had fallen asleep at the study desk.

The fluffy was careful not to wake her owner, but the gentle movement of her stretching to work out a muscle knot roused the young woman from her sleep.

Disoriented and drowsy, Becky looked at her watch and groaned inwardly at her carelessness. Carefully lifting her fluffy off her lap, she placed Ruby back onto her cushioned fluffy bed that sat under the study table.

Hastily gargling a cup of mouthwash, she booted her laptop back up, wasting no time to research where she could take Ruby camping. The frantic tapping sounds of keyboard and mouse woke Ruby properly from her sleep.

Pulling aside her blanket with her mouth, the red fluffy rose from her bed and slowly walked up to where her owner was sitting. Noticing Ruby’s fluff against her legs, Becky reached down and placed Ruby back onto her lap.

“I’m so sorry sweetie, I fell asleep and I didn’t even organize a place for us to go this weekend. There is so little time to get everything organized.” She continued her frenzied typing in search of information about the best and greatest campsites.

Browsing through old webpages of places she had already taken Ruby, she wanted to find a campsite that would be interesting to Ruby.

Somewhere new and different to the fields of pastel wildflowers that they visited in the spring: 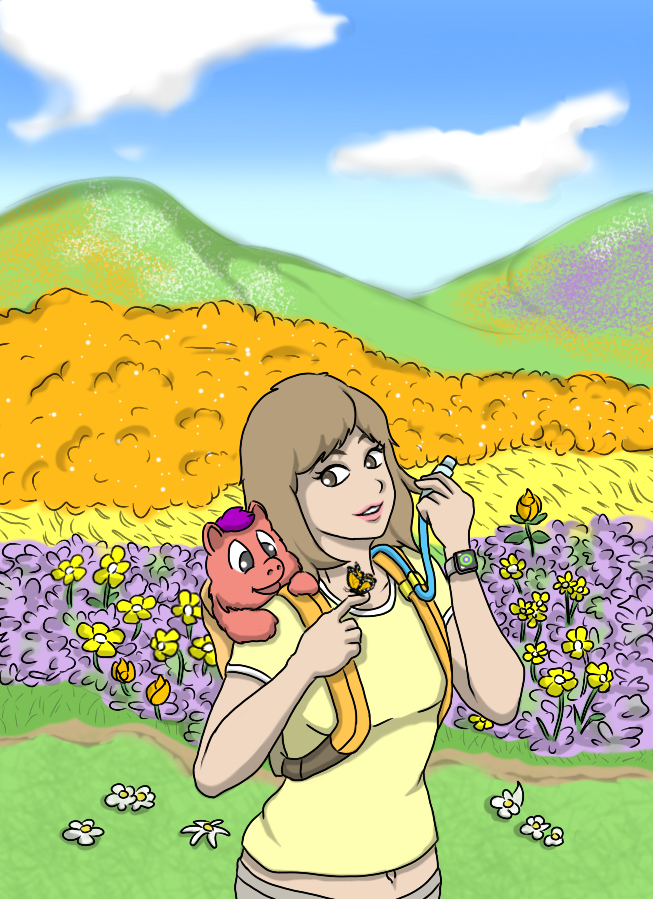 Somewhere different to the glistening beach and crystal clear waters where they paddle boarded to see the sea-fluffies in the summer: 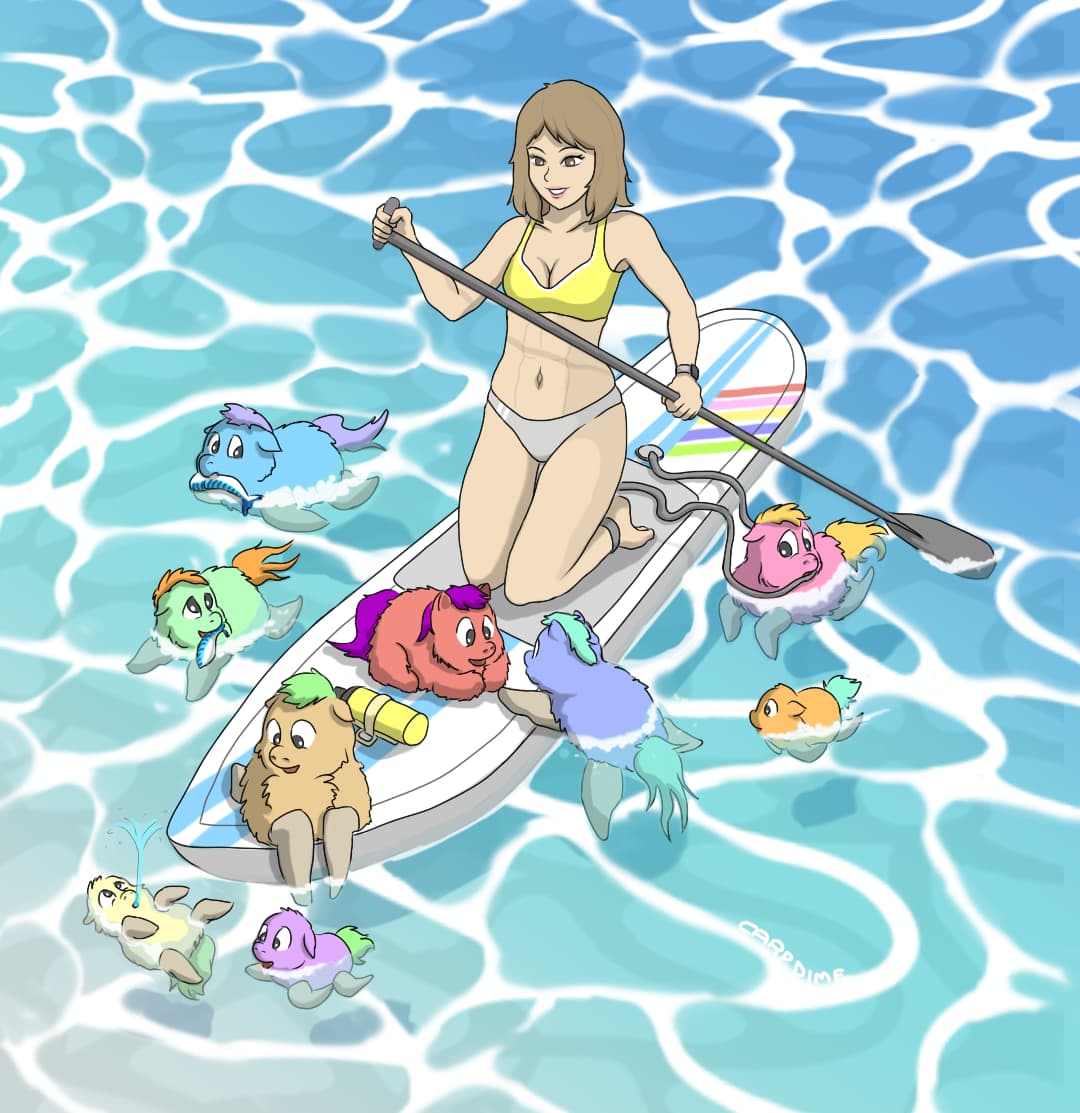 Somewhere different to the apple orchards with the food stalls that seemed to stretch for miles that they visited in the fall: 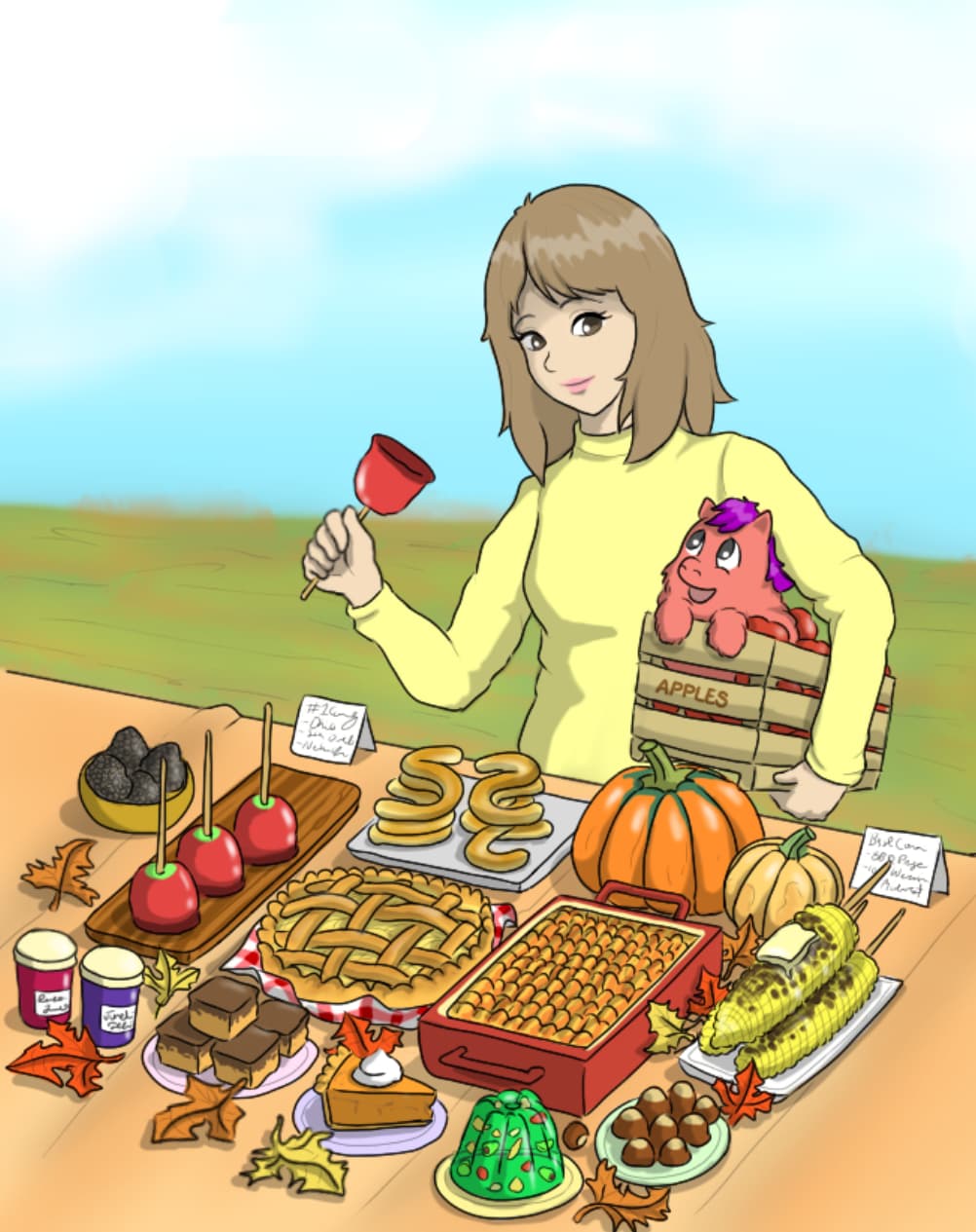 It had to be different and it had to be interesting to make up for the lost time she spent away from Ruby.

The young woman stopped her browsing and looked down at Ruby.

“But Ruby, you’ve spent all week indoors, don’t you want to go out and see something new?”

Ruby tucked her legs under her puffy chest fluff and settled comfortably on Becky’s lap. As much as she loved seeing and exploring the new places that her owner took her, it was just spending time together that mattered the most.

Becky realized that it was the first time that Ruby had called her “mummah” since her adoption.

“Are you sure Ruby?”

“All right if you insist…You choose the movie while I make us some pop-corn.”

From a stack of cheap second hand DVDs that Becky had bought from a yard sale a few months back, Ruby chose a diverse selection of cartoons, comedies and documentaries. As the smell of buttered pop-corn filled the air of their tiny dorm room, the two ladies settled into a relaxed day of movie watching interrupted only by naps and takeaway from the local taco shop.

As Saturday night came to pass, the last movie in Ruby’s selection was playing on the small laptop screen. Becky held Ruby close to her chest and she savored the present moment, free of the worries that weighed her down throughout the week.

It was there and then that Becky realized that we are all not given a short time to live, but that we are wasteful of the time we are given. 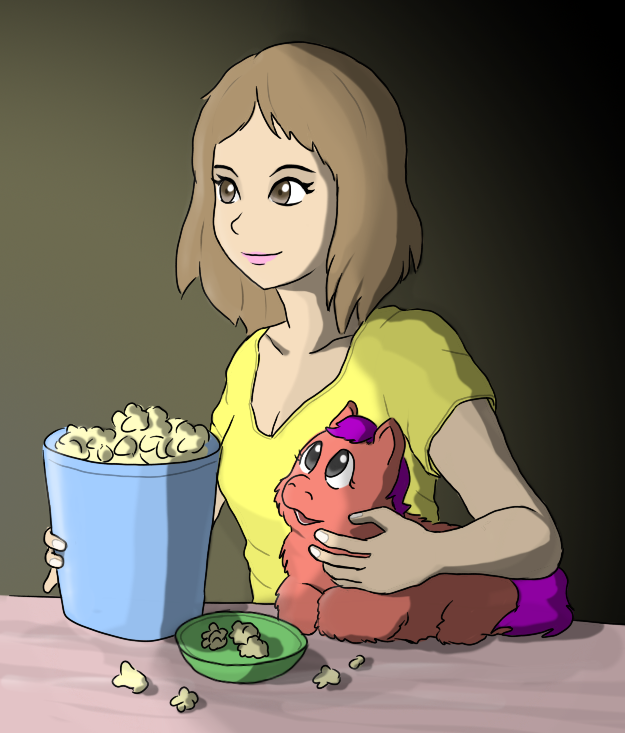 A short slice of life text piece that puts a bit more context on some of the previous drawings done for Ruby and Becky. Also added a new drawing related to the text.

The story is somewhat a sequel to the Fluffymart Connection I did a little while back.

Really lovely work on Ruby, Becky and the popcorn! And this peice really contextualizes the past Ruby & Becky pieces ya did. This story was quite the Easter treat! : D