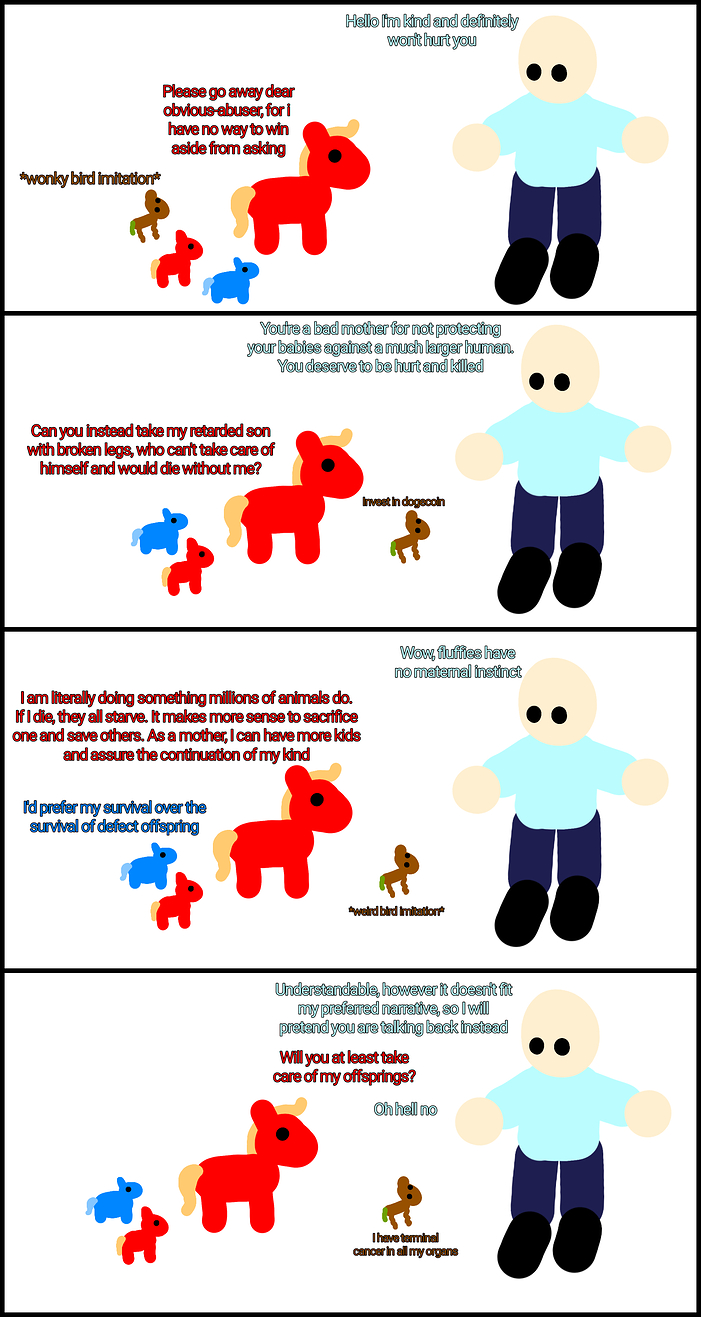 A well-thought out argument against the unnecessary abuse of feral animals and the overreaction towards struggling single mothers?

I have nothing against abuse art, but abuse fans who come up with ridiculous justifications for abuse kinda annoy me.

I prefer either indifferent humans who kill fluffies because its their job OR straight up psychos.

Though the rarest and best is when an evil fluffy gets abused, because then its both fun AND righteous!

I don’t mind some justification, but sometimes it’s really silly and sometimes it feels more like a fable than abuse
i want blood, not moral crisis

Now THAT is a slogan worthy of the old 'booru:

Reminds me of an infamous quote about the MMO Shadowbane:

(Of course, ironically it turned out that a lot of people do play games to metaphorically bake bread–or at least to farm–and Shadowbane failed miserably)

Or stuff like: you ran away, now you go from beloved pet to miserable creature I only want to see die painfully while I give my love to another fluffy.

To be fair, if a toy intentionally ran away and made me worried and sad, and then just came back, I’d be pissed too

That’s something about fluffies that fascinates me. They act so much like animals and essentially just do things other animals do. I feel like the fluffy’s ability to articulate, makes it so much easier for humans to see the fluffies’ animalistic behaviours more as those of a sapient being making a morally wrong choice, and less as an animal doing what instinct says is right.

When I worked with large parrots and we told people that unless you want an attention-addicted perpetual toddler shitting all over your house, parrots make pretty bad pets. I feel the same way about fluffies.

To an extent, I’d be aswell.

But if said animal marketed as a toy told me that it wanted a family and ran away to try its luck, I wouldn’t be dead set on hurting it more than it has already been by life on the streets.

If I truly loved it as I love my cats IRL, I’d also be overjoyed to have it back.

I feel like the fluffy’s ability to articulate, makes it so much easier for humans to see the fluffies’ animalistic behaviours more as those of a sapient being making a morally wrong choice, and less as an animal doing what instinct says is right.

This guy gets it.

I just see fluffies as these tragic creatures stuck somewhere inbetween animals and humans, with just enough intelligence to speak to people but not enough to truly get their point across.

Technically speaking, this is something I’ve found myself wondering about from time to time, when reflecting upon whether or not I’d want a fluffy as a pet, were they real.

I feel like I wouldn’t really be able to treat one as such, due to them being this odd cross between animal acting on their base instincts and sapient, human-like beings able to reason, develop and understand (to an extent and varying for every artist here) concepts such as dreams, aspirations and ambitions in regards to their own lives.

A cat in heat will cross a road to bang because instinct tells it to, but will usually give zero shits about its offspring and come back to its cozy home after the deed is done.

A fluffy might do so too, but end up falling in love with their counterpart, maybe choosing willingly to give up a life of comfort to get a shot at experiencing parenthood.

For this reason, I’d be more inclined to have one as a pet-friend of sorts, rather than a pet I own.

When I worked with large parrots and we told people that unless you want an attention-addicted perpetual toddler shitting all over your house, parrots make pretty bad pets.

Parrots: the Chris-Chan of birds.

That, and Chris-Chan has a fondness for clothes with bright, garish colors, like a parrot’s feathers.

And he often exhibits echolalia…

Which is repeating words other people say…

PLEASE, I need funny stories from your work. That sounds hilarious

We had a couple of female blue-and-gold macaws that came from two separate households and fell in love upon meeting.

So they’d build a nest and do parrot mating behaviours all the time. I was funny seeing how some people, parents and teachers, would react after finding out that the parrots were female and realized were doing lesbian parrot sex in front of the children.

The cockatoo and scarlet macaw each treated the main caretaker at the place as their mate, and would do courtship/partnership behaviours with her. They were also female, by the way. She’d do them back and tell the guests that to be accepted fully by the parrots, she has to be 100% in their “culture.” Part of that was greeting by touching her tongue to the parrot’s tongue when the parrot offered it, and trusting the parrot not to bite your tongue off.

As a funny addition, fluffies remind me of penguins. I used to tend African Penguins at the same facility and they always had baby toys (keys, blocks, pales and shovels, etc) to carry around and mess with as enrichment and some of the territorial ones would run right up and bite you for being on their land. And don’t get me STARTED on the liquid projectile shit every fifteen minutes.

I was funny seeing how some people, parents and teachers, would react after finding out that the parrots were female and realized were doing lesbian parrot sex in front of the children.

Meant to rely to you with my response but I did respond! I’m just inept lol.

it’s fine, those stories are really funny! You worked as a bird helper/wildlife helper?