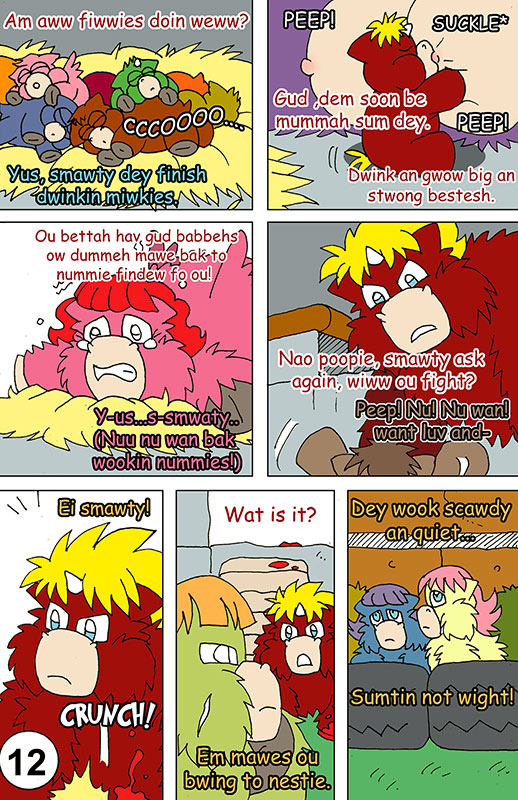 So he and probably most of his herd overcame the “huggies and luv” BS programming, Red has no patience for foals that have no instinct to fight.

Hug and kisses won’t save that runt.

Pax Romana, the Fluffy has no value beyond their utility to the herd, either as a means of war, or production.

Yep, Crowley would’ve loved this guy, still would’ve killed him, but at least he’d feel bad about it

Respecting enemies who have higher idea of a strong herd, I like that.

Yep. When poopie started spewing fluffies are for “huggies and luv,” smarty sees that this thing is useless and a waste of resources to the herd, so he wastes it! like the garbage that it is.

If you can’t fight back than you can’t live, geez that’s a harsh rule those fluffies have but I guess I kinda understand where he’s coming from but still… That was harsh and brutal.

It seems like in average fluffy “families”, shitty fluffy parents are awful enough to be mean to unfavored foals, yet don’t kill them, so they just friggin’ die slowly.
But this guy is all about efficiency apparently. In a fucked up way, even when a foal is killed it has things a lot better than many other circumstances would turn out.

He has his reason and Tank been training him since he was a foal.

The mistake that Smarty is making, which far too many humans make as well (looks suspiciously at the comments), is in believing that safety can be secured through “might makes right”. The problem is that no matter how strong one is, there is always someone or something stronger.

This is particularly evident with fluffies–the smarty’s emphasis on violence is awesomely stupid given that even the strongest herd is easily wiped out by a single adult human. But its true of humans as well–even the strongest countries are helpless against the power of nature.

But where strength fails, cooperation and collaboration can succeed. For in the face of the blizzard, the ‘strong’ herd, having purged its weaker members, will freeze, while the ‘huggies and wuv’ herd will have a cozy fluffpile.

Tank been training him since he was a foal.

And purposely trained him wrong, as a joke?

is in believing that safety can be secured through “might makes right”. The problem is that no matter how strong one is, there is always someone or something stronger.

No to toughen him up for his future.

Usually i care for poopies but he didnt fight so…

Well its because what happen to their old herd, will be revealed soon.

…You do realize that it was a Kung Pow reference, don’t you?