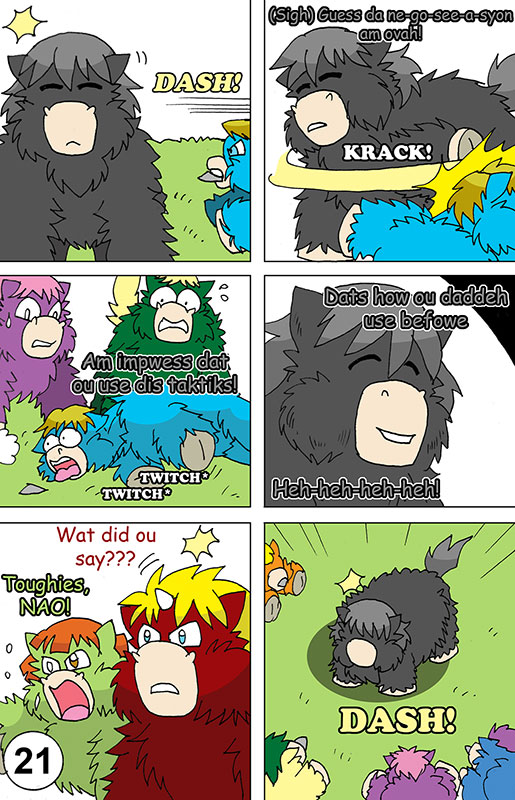 I love the big dude, but now I want to see how he’s going to get out of this. Size and strength can only get him that far, he is bound to have a plan.

Damn you now got me imagining it

Its going to turn from 0 to ip man really quick

Here we have a DragonBall character, but he’s a fluffy.

Well, for now he only dispatched a smaller fluffy.

Maybe he won’t be Fluffgeta and he will have to rely on other tricks other than brute force.

Fair point. I still hope he will use some ace up his non existant sleeves rather than be fluffy hulk, unstoppable and ruthless.

I’m betting the big guy is thinking. “It’s cute they think they stand a chance,” or something along those lines XD

If I we one of those fluffies, the second i saw a herdmate get his neck snapped with one low effort swing, I would just turn around and not stop running until I I couldn’t hear the screaming anymore.

‘Ou daddeh’ eh? Guess Grey Smarty’s seen the knife rock trick before. Wonder if he’s going to be counting on them relying on those tactics- or if he is going to use the knowledge he’s sure the old fluff passed down against those fluffies. I mean, tool use is good but holding it in your mouth means even a normal blow to the face could have the fluffy swallowing that rock. Not a great way to go!

He’s obviously not worried about the rush, my question if I was those fluffies is still how he could take off a fluffy’s entire face in one blow. Or if that wasn’t him …and he’s just led something far worse into this new herd’s safe place.

Hol’d up! So this smarty murdered the red’s one dad and that’s why he is so obsesive over the “only the strong ones live” and " need to become stronger" thing? Because he didn’t want to end like him and now might want revange… Is he turning into the protagonist?.. wut!?