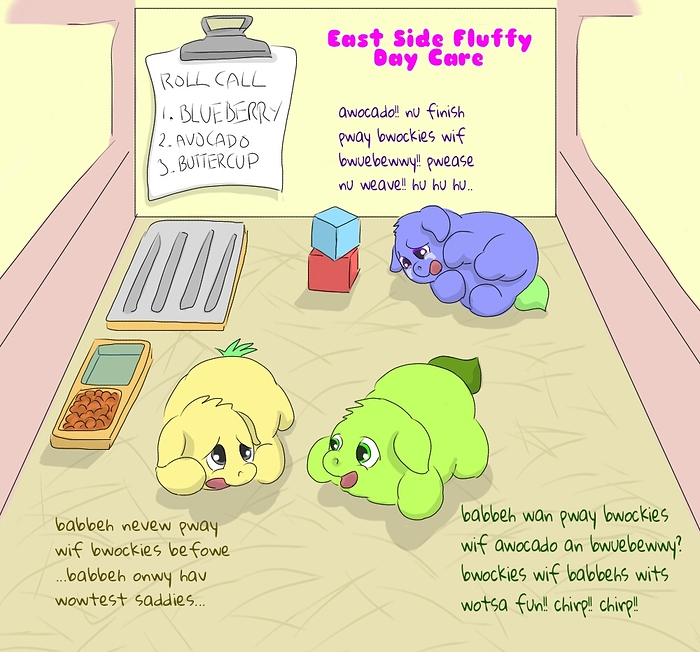 I had used this image as an illustration for the Buttercup interlude of Avocado, but I feel that I should also upload it on its own due to its significance as one of the first crossover images of Carpdime’s three main hugbox characters.

By now, Avocado may need no introduction as he’s the foal-in-a-can, and he’s also the subject of one my longest fic series. He’s my main favourite among many characters in the fluffy fandom, and a reason why I am so attached to fluffies (along with other great characters).

Buttercup was the subject of Sad Buttercup and was a fluffy who was abandoned. It is not known what his origin was, but I imagine his early history would similar to some of Carpdime’s abandoned foal images. Buttercup was eventually adopted by Scarlet.

Blueberry, as this image would suggest, is Avocado’s first friend, and is a little scaredy cat. Carpdime did some older images of Blueberry, but his origin from a breeder was recently depicted.. Carpdime has written quite a bit on Blueberry & his owner Jimmy, and you can start on Chapter 1 here.

This picture is significant because it was one of the first crossover images within Carpdime’s canon of his hugbox characters. It also depicted one of the bigger meetings of various characters within what both of us have termed the “Avocadoverse”. I may have to work on this post a bit more in future, but here’s the three amigoes.

May be pending but my heart approves.

lol
avocado: leaves for 3.2 seconds
blueberry: I WILL NEVER RECOVER FROM THIS!

Haha, there’s quite a bit of writeup behind this image! It was one of the first depictions of Avocado, Blueberry, and Buttercup together as a trio. Its also interesting how there were hints at a larger world when Carpdime first drew them back in the day, but it was only recently that he has really fleshed out their world.

One day I might learn to draw something original…but today is not that day.

I may or may not have spent a good 30-45 minutes at work doing this.

Why is the trio so effing adorable?!

I did not realize at the time, but this picture had a hand in uniting the separate OCs I had only fleshed out lightly at the time. It was the beginning of an Avocadoverse that @Oculusfluffy was instrumental in constructing. It was a vision that even I had no idea of its potential.